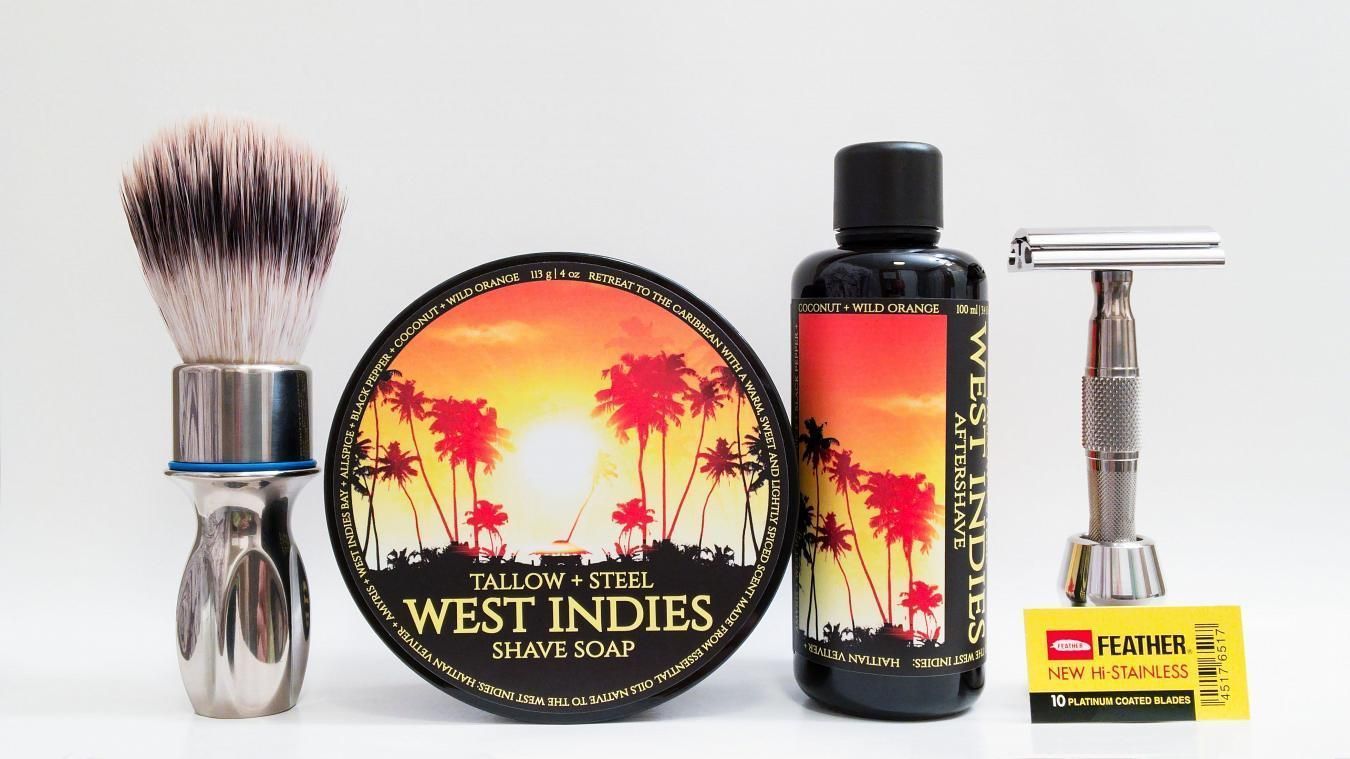 Ahoy, me hearties! Weigh anchor and hoist the mizzen on this fine #HumpBay where we'll bring a spring upon ‘er with the newest Tallow + Steel West Indies #soap and #aftershave from their all-new 2017 lineup!

A warm citrus scent, tinged with ocean breeze and lightly spiced with the smells of the Caribbean - West Indies is the smell of endless sunny days where troubles are left far away.

Created using a blend of essential oils from the Caribbean, the tangy wild orange and smooth coconut dry down to the warmth of amyris and Haitian vetiver, spiced with West Indies bay, allspice, and black pepper.

West Indies brings the relaxed island life to your day with a scent that doesn’t take itself too seriously.

West Indies by #tallowandsteel is not, as you might suspect, a spin on bay rum. It's not quite that simple and not billed as one. Officially, it has notes of Haitian vetiver, amyris, West Indies bay, allspice, black pepper, coconut and wild orange. Upon first whiff, you get the obvious bay (pimenta racemosa) which gives it bay rum cred... But it's so much more. The bay is further spiced up with allspice and black pepper, rather than clove or cinnamon. Another twist is that rather than the more typical lime, there's wild orange and its tropical nature is supported by coconut. But the real uniqueness and overall tone of the base comes by way of Haitian vetiver and amyris (also sourced in Haiti, and known elsewhere as West Indian rosewood or Indies sandalwood). They play off of and support each other. The former adds a certain distinctive, light smokiness to the grassy, woodsy vibe while the latter also acts as a fixative... Which is how, in part, this fine brew extends longevity of the aftershave scent to 4+ hours.

Both traditional and the most common (artisanal and otherwise) bay rums I've tried (of which there are many) don't last very long as a scent. If you get a couple of hours, you're quite lucky. Most are gone in half that time. Some artisans add their own unique spin, perhaps adding tea and lime notes (i.e. Dr. Jon's Anne Bonny) or sweet orange, benzoin and just a hint of cinnamon (i.e. Barrister and Mann Bay Rum). But no one takes it in a completely different direction like this. Other than the bay, this really is a different animal completely. As its name suggests, it represents the Caribbean namesake with notes sourced from and representing the region, and does it well. It's complex and tropical, yet easily approachable.

Like all of the new scents, and as already mentioned regarding the sourcing of ingredients from the region, 10% of profits from West Indies are donated to Hope For Haiti, who's mission is to improve the quality of life for the Haitian people, particularly children. So you're not only taking an olfactory journey, you're also supporting a great cause local to the the region. The immersion is complete.

Hardware for today's trip consisted of the #TimelessRazor in my "mild version" of which you should, by now, be familiar (.68 gap smooth solid bar base plate and top cap with a #Stork EX3 titanium handle) - with a fresh #Feather blade to see how she flies. I can happily report that it was as smooth as ever, despite having the sometimes rough blade (at least on the initial shave). Smooth as glass, plenty of edge to get the tricky spots and as comfortable as it gets. I used my #BSB Shaving Brush today as it's my go-to but as with other really soft soaps like this, I'll probably use the SOC going forward. It just makes loading easier, in my experience. The #GTP scuttle of course, kept the lather in one place and kept it warm like under the Caribbean sun.

YES! This new software is all that and a plate of riz collé aux pois. Like Caribbean cuisine, it's bold and colorful - and the performance is top caliber. While not really billed as a bay rum, you could take it as one - but that would be a disservice, as its unique complexity and longevity as a scent make it unique and memorable on its own... I can't wait to explore the other scents in this new lineup.