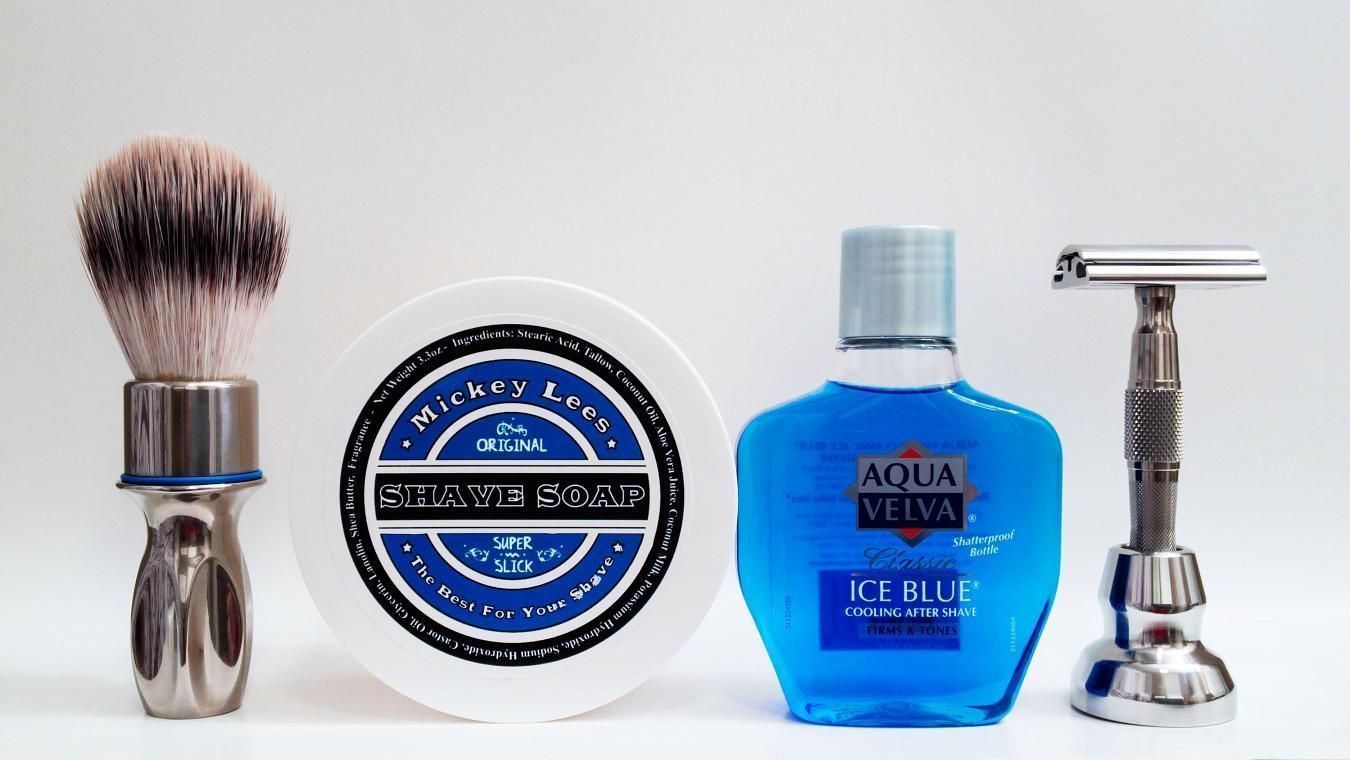 A little Throwback Thursday action, featuring the unobtainium that is Mickey Lee Soapworks Sex Wax #soap and Aqua Velva Ice Blue #aftershave that's been around since 1917!

The best for your stick shave!

A quick word on the chart above; in this case, I've reviewed the soap in the Value and Lather sections, the aftershave in the Post-shave and Scent sections.

The limited edition Sex Wax soap from Mickey Lee Soapworks is a bit of unobtainium at this point, originally released in 2015. The scent and label (compare images above) is a direct take on Mr. Zog's Sex Wax - a staple among surfers since 1972. It's a wax that's rubbed on the top surface (deck) of a surfboard to allow traction and grip for the surfer. Think of it as similar to "grip tape" for you skaters out there. The original had a cult following due to the name (it does stand out), the branding and ad slogans and solid performance. While the original had a distinct coconut scent, others included strawberry and pineapple. This soap scent is definitely coconut - yet also has a bit of a "waxy" smell to it (possibly from the base). It's a bit hard to tell as the scent has faded a bit over the last two years. It's a really fun scent.

There was a brief rumor that Sex Wax would come back as this summer's scent ("Sex Wax is being considered as next years summer scent in place of Kokomo." - MLS, 09/16) but alas, it was Paradise Frost that made the cut.

Mind you, this soap is the older formula. Performance is good (but not standout), as the soap produces copious amounts of fairly creamy lather with decent cushion and lubricity but comes up a bit short on residual slickness and face feel. The current, reformulated soaps have added kokum butter and avocado oil and use a bit more coconut milk. This has served to fix up the cushion, slickness and face feel - and makes for a much better overall soap. Let's compare:

The packaging (really the label) is also the old style, which wasn't quite so waterproof and robust like the new ones. It exhibits wear and tear more readily, if not easily. All in all, it was a good move on the part of Mickey Lee Soapworks to reformulate and repackage (new labels) for the start of 2016. In fact, it was a necessity to remain competitive. I'm also thinking that those Sex Wax labels had a lasting impression and served as inspiration for the Mickey Lee Soapworks labels in general, with which they still bear a remarkable resemblance.

Aqua Velva Ice Blue was originally introduced in 1917 (2017 being the 100th anniversary, as noted on specially marked packaging) by the JB Williams Company (later acquired by the Beecham Group in 1982, SmithKline Beecham plc. in 1989 and by GlaxoSmithKline from 2000 until it was sold to Combe Incorporated in 2002). As of 2016, it is marketed by Combe Incorporated - and Unilever in Europe. The classic Ice Blue serves as the original version of Aqua Velva. Combe Incorporated began shipping Aqua Velva in plastic "shatterproof" bottles on February 1, 2010 (whereas previously it had been packaged in glass bottles). Supposedly "at customer request" and containing the same product, with no changes in formulation...

Aqua Velva Ice Blue is nothing fancy. Let's face it, it's a cheap drugstore brand of aftershave the likes of Old Spice and such. But, it's been a classic staple for a long, long time. It has top notes of bergamot, lavender, peppermint, petitgrain and lemon, middle notes of clary sage, jasmine, vetiver, sandalwood and cedarwood with base notes of labdanum, musk, amber, moss and leather. While it sounds like a deep, complex accord (and technically it is)... The quality of the ingredients belies it. The reality is that it's a bit of a "cheap fragrance" - albeit one that's decent smelling and well liked. It's a bit citrusy on open that mellows into an herbal, slightly woodsy middle, finally settling into a musky, amber base. Overall it's got a light menthol kick (and scent) to it. Sillage is mild and longevity is fairly short at about two hours.

Actual performance as an aftershave is fairly... Flat. There's not much in the way of healing properties outside of perhaps alcohol. Moisture is similarly lacking, containing only a scant amount of glycerin. Face feel is okay though - light and refreshing. Really, it's a ridiculously simple formula - but some people prefer that. Look at Fine Accoutrements aftershaves or Chatillon Lux "Summertime Chill" aftershaves. There's a market and a following for these simpler brews, and there's something to be said for them during the warmer months as they're not in the least bit "heavy" on the skin. The actual ingredients here are:

Hardware for today featured the standard daily driver these days, the custom #TimelessRazor in the "mild edition" with a #Stork handle and #Feather blade on shave five. The #BSB Shaving Brush made quick work of generating the lather in the #GTP scuttle. After today's shave and some experimenting over the last couple of weeks, I'm definitely of the mind that Timeless Razors "prefer" (read: perform best with) newer blades. While I typically go about five shaves on blades in most razors (save for the Mühle R41 at 2-3), I'm thinking four, tops. Not that it pulls or anything like that, but it's just not as close as they're easily capable of. Today I got a shave more typical of the average mild razor.

So yeah, it's a little bit of nostalgia today... A soap scent that brings back memories of Mr. Zog's Sex Wax and the even older classic that is Aqua Velva Ice Blue. Performance was all around kind of so-so from the older soap formula, the mass market aftershave and a blade that's past its prime in an otherwise stellar razor... But that's okay. It was a good, fun shave just the same and I'll surely do it again in one form or another. If you compensate with a better aftershave, you'll be aces. The highlight, really, was the scent of #MickeyLeeSoaps Sex Wax soap! I'm a sucker for coconut, and this one hits the spot - with a twist. I'm glad to have obtained not one, but two tubs of this stuff. In fact, I'll be selling my used tub shortly (contact me if you want it - a treat for my readers). I'll be keeping the new tub for my archive.