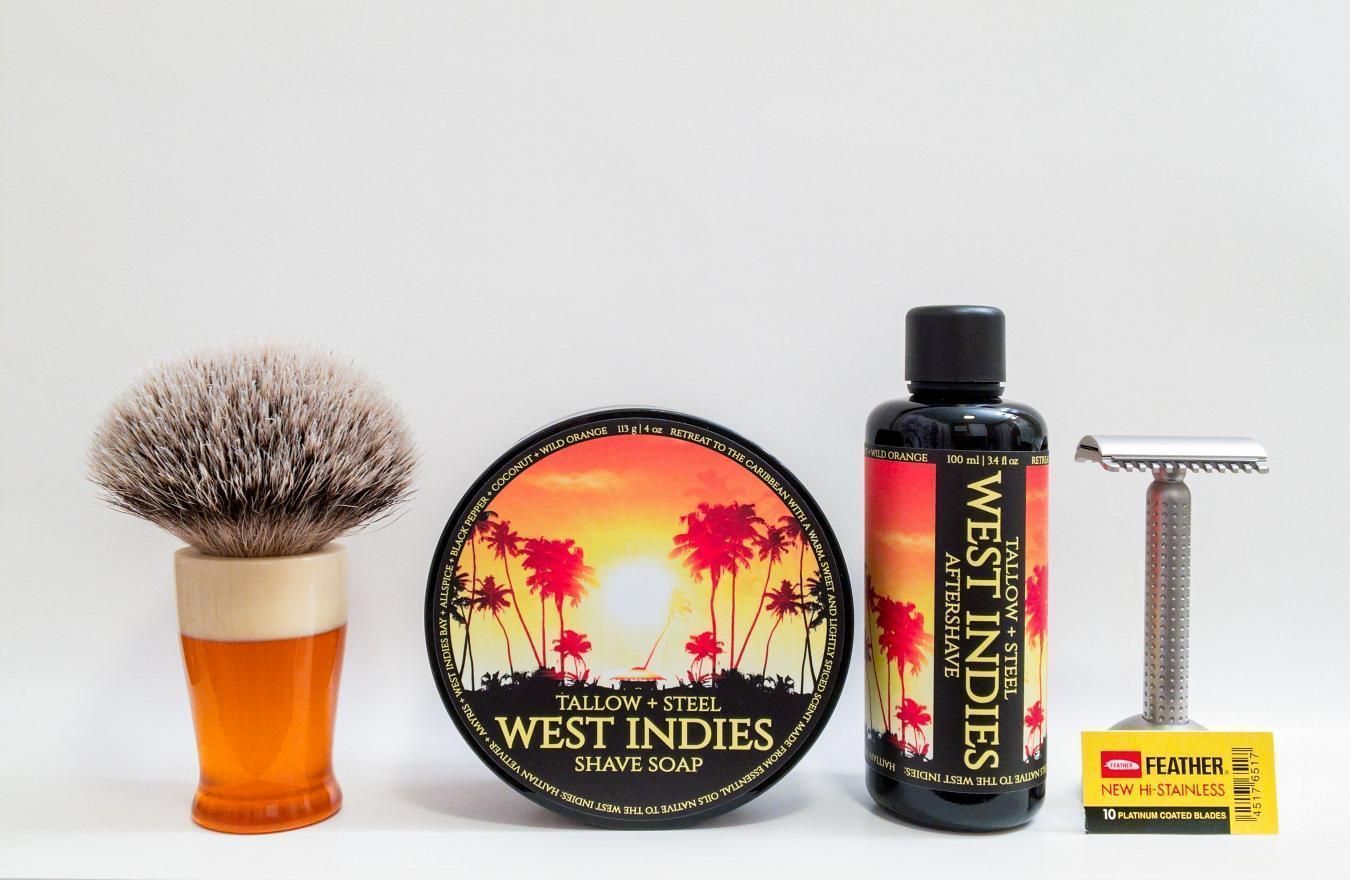 Continuing my trials with the #TataraRazors Masamune razor with Tallow + Steel West Indies #soap and #aftershave!

A warm citrus scent, tinged with ocean breeze and lightly spiced with the smells of the Caribbean - West Indies is the smell of endless sunny days where troubles are left far away.

Created using a blend of essential oils from the Caribbean, the tangy wild orange and smooth coconut dry down to the warmth of amyris and Haitian vetiver, spiced with West Indies bay, allspice, and black pepper.

West Indies brings the relaxed island life to your day with a scent that doesn’t take itself too seriously.

I've written two very extensive articles on the new line, the first being Meet the All-new Tallow + Steel Products with the follow-up Tallow + Steel 2017 - First Impressions which covers the reformulations and performance (besides other aspects) so I won't repeat all of that here. If you're looking for a review of West Indies specifically, check that out.

West Indies is a great scent in a pair of great bases. It's reminiscent of your typical bay rum - but it's not one, per se. Much more going on besides just the bay and spice. The aftershave(s) are also non-alcoholic, which is a nice break and a bit non-traditional for a bay rum. Good thing, as I might've yelped considering...

As with yesterday's shave I used the #TataraRazors Masamune #razor again with a #Feather blade today. I had hoped that the shave would be a bit mellower, being the second shave on the blade, and while it was (slightly) better, it still wasn't a particularly fun shave. I find that these blades are too hot and harsh, generally, to be worthwhile. While they're the best blade in the Feather AS-D2 I can't say the same for most others I own. Ironically, they're what's included with the razor, appropriately enough, perhaps. I'll stick with PolSilver blades. Super smooth in everything, just as close a shave and a night and day difference for me - and not just in this razor... Which is absolutely not to blame here.

Alas, between yesterday's shave having already burned my face a bit and today's being no less friendly - I barely got through three passes. As a result, not particularly close either. Of course, YMMV, and you'll have to experiment for yourself. Personally, I've about had it with Feather blades. We just don't get along most of the time. I recently tried Voskhod blades and they were nice enough, but a bit draggy. Maybe I'll try a Gillette 7 O'clock (black) blade. I've had pretty good luck with those and were my former go-to blades.

I've been finding the weight and balance of this razor to be just perfect. While it's made of stainless steel, it's not heavy - or bulky. In fact, it's quite a nimble design. Such that with a good blade, you can shave like a wild man, quick and curvy, without any worry. The matte finish (and especially the dimpled handle) make for a non-slip grip as well. Of course, having the matching stand is a great way to finish the shave. Drop it in and go.

One thing worth pointing out is that the handle diameter is 11mm. So don't plan on using the stand with any other razor or handle... And speaking of which - a third-party handle will not work on this razor. For one, there's a shoulder on the threaded section which prevents tightening it up all the way. Second, the handle and base plate design of this razor is such that they need each other.

The brush is a beautiful piece from #ThatDarnRob resembling a nice pint of beer, and sports a custom 22/24mm silvertip badger knot. Not shown is the teak wood coaster that comes with it. A lovely knot, and soft - but the density could be a bit higher. Another ThatDarnRob brush I have, has a custom 30mm two-band knot in it and it's spoiled me for sure. It's huge and dense and offers a good bit more backbone as well. Even after my third pass, the core is still quite warm from the initial soak... Amazing. The #GTP scuttle of course, did its usual fantastic job.

A rather disappointing shave today, unfortunately. Between being a bit razor burned yesterday and the overall harshness of the Feather both days, it just wasn't fun. I've decided to postpone the razor review for the next post as I plan to switch back to a PolSilver blade and do it right. I also have a special bit of software that I've been waiting on to make its debut alongside!