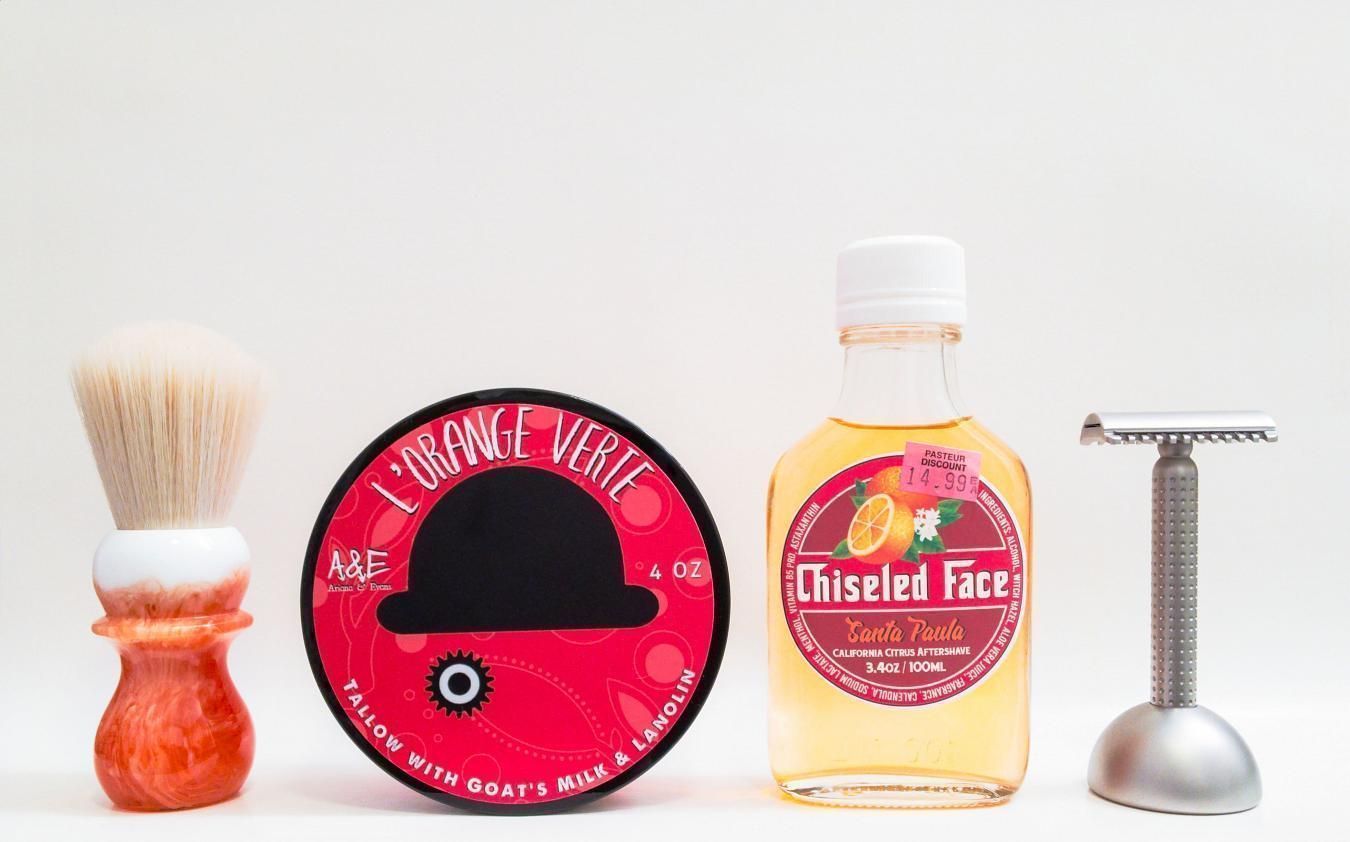 Who doesn't love a citrus forward soap? Well, if you like that bright citrus pop, A&E has upped the ante by adding a bit of earthiness to round out the fragrance. The result is a "soft (not weak), sophisticated, clean, complex" scent. Two types of orange, lemon, and bergamot take the lead, but then a black pepper and lavender note add a new twist. The warm, inviting oakmoss base with touches of patchouli softened and deepen the aroma.

I've been hearing good things about Ariana & Evans (a.k.a. Shaving Shop Club) soaps after the relatively recent upgrade to the goat milk and lanolin base. For a background on Ariana & Evans check out the appropriately named article; What is Ariana & Evans? Today I'm giving L'Orange Verte a try to see if the hype stands up! The scent is primarily citrus-forward but with a twist. It features notes of bergamot, tangerine, lemon peel, orange, black pepper, lavender, neroli, oakmoss and patchouli. Obviously the bergamot, tangerine, lemon peel, orange and neroli provide the citrus with a little bit of spice, thanks to the black pepper and a touch of floral lavender. Naturally, being so volatile, the citrus burns off rather quickly - revealing the base of oakmoss and patchouli... Which is fairly common but also very nice.

Unfortunately, I don't have the aftershave splash, which would have been a better indication of the scent; free of any influences by the soap base; being cleaner and of course brighter. At any rate, the soap scent strength is a slightly lighter medium and blossoms a bit when lathered - I could smell it for the duration of the shave and liked what I was getting... I'm a sucker for citrus as well, so I'll probably grab that at some point. Instead, I used #ChiseledFace Santa Paula Citrus which I've had for quite a while and shares a similar vibe, if not different notes of petitgrain, siberian fir, bitter orange, clary sage, litsea cubeba, siam wood, and cedar. See my in-depth review of Santa Paula Citrus for more information.

The performance of the soap lived up to the hype, I must say. Loading was fairly easy, though perhaps hampered a little by the brush (being a bit too soft). The consistency and proto-lather of this #ArianaEvans soap is rather reminiscent of Declaration Grooming soaps. Once loaded, the soap lathered up very easily in the #GTP scuttle. Because of the loading I was a bit shorter on lather than anticipated but it was still plenty for a full three-pass shave. The lather is thick and creamy, with very good primary and secondary slickness - and resulted in very good face feel. Of course, I'll need more air time with this soap to really dial it in and get a feel for it. I'll be reviewing Asian Plum fairly soon, so stay tuned on that front. Finally, let's look at the ingredients, then:

The packaging is fairly standard, even above average - but in the best possible way. Tried and true Parkway tubs in all-black with straight sides and waterproof labels on the top and side. The branding is clear, and the artwork more upscale and custom than it has been in the past with other offerings; it's an illustrated piece recalling the movie A Clockwork Orange in an abstract way. Asian Plum is another example of this styling, and equally nice. Hopefully the artisan continues with this route. My only gripe (or more appropriately - nitpicking) is the reference to goat milk; it's interchangeably called "goat's milk" or "goats milk" by the artisan... It's really just goat milk. But a lot of people make that error, apparently.

Hardware today was the #TataraRazors Masamune with the open comb base plate with a #Feather blade on shave four. Ironically, the last time I used this razor, I also used the same brush! But to recap, it's a custom piece from #TurnNShave with a 24mm Angel (a.k.a. Cashmere) knot that's set at a slightly lower loft than usual, so as to give this rather soft knot more backbone - that's why the knot looks more slender than you might be used to seeing. The #GTP scuttle did the rest.

A pleasant shave today with some new software; both in the den and recently reformulated (and now the artisan's standard base). It definitely performed, and I'd place it in the top tier - though I'll need to use it more to firmly assess that either way. A nice citrus scent, though a bit hard to tell exactly with just the soap... The Chiseled Face aftershave was a great stand-in, though clearly doesn't get enough love.