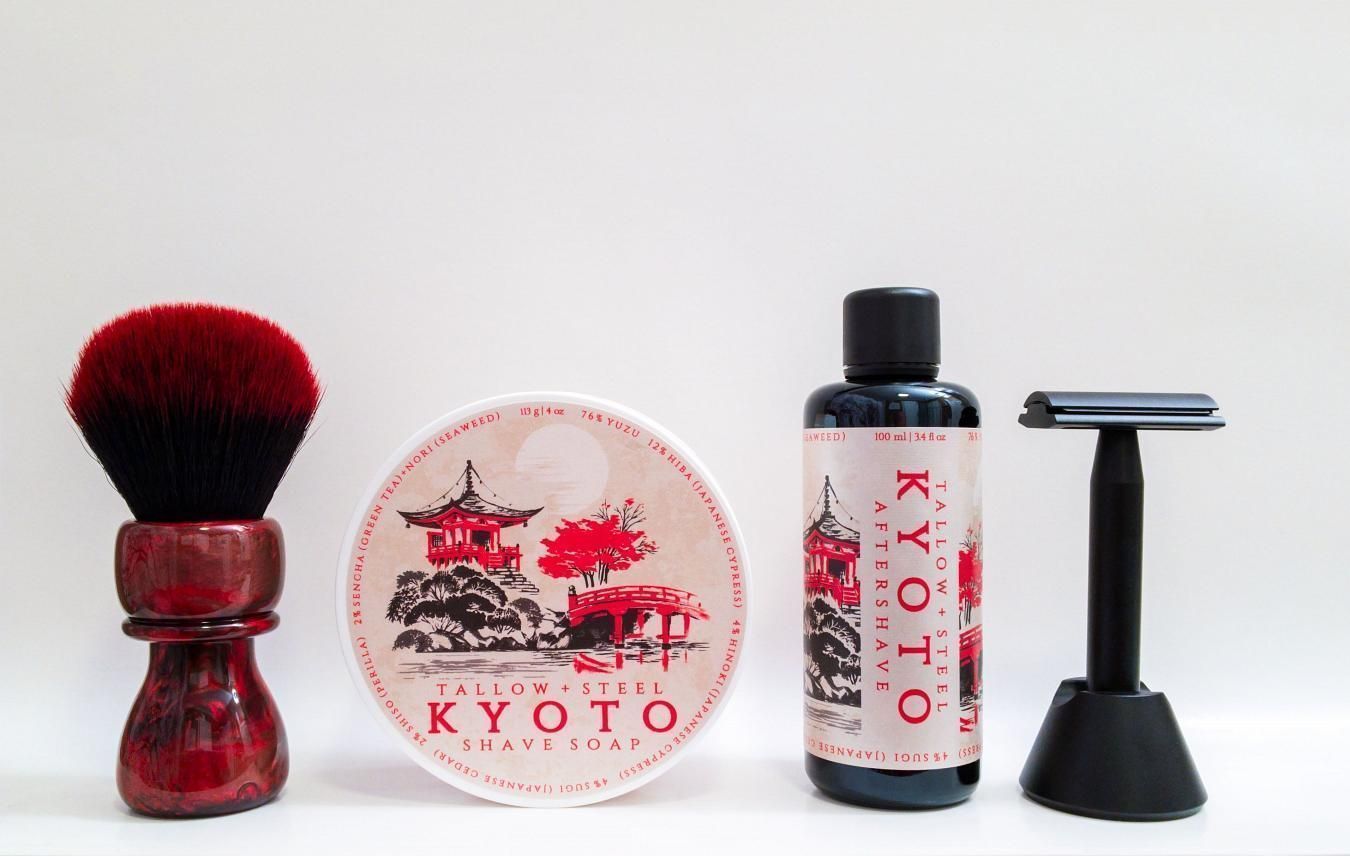 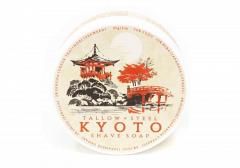 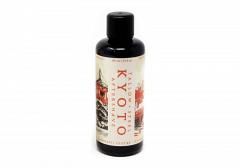 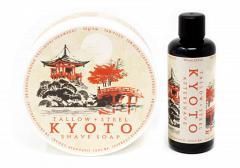 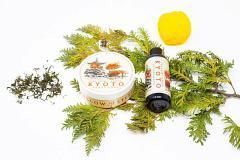 Unleash your inner zen, as you’re transported to lush-green mountains, ancient temples and sublime gardens with this Japanese-inspired scent.

Kyoto is a city preserved in time - a place where the eastern mountain breeze rushes through narrow streets, the tang of merchant shops and tea-houses infuse the air, and towering bamboo groves can be heard creaking in the wind, beckoning you to enter.

Long-time readers may remember the two very extensive articles on the new line last year, the first being Meet the All-new Tallow + Steel Products with the follow-up Tallow + Steel 2017 - First Impressions which covers the reformulations and performance (besides other aspects) so I won't repeat much of that here. There's a lot of new things to talk about for the 2018 products, which were released on June 15, 2018. This will be the first of three reviews, the most in-depth and serve as the reference for the following two which are Madagascar and Sicily. Finally, be sure to check out the final impressions at the bottom!

Unlike the 2017 line-up, which replaced all previous scents - the 2018 releases add to the existing line-up. The two exceptions are Limited Editions and includes today's choice, Kyoto (which in fact, as of this writing, the soap has already been sold out for a few days). The other is West Coast IPA for those that missed it last year. Unfortunately, like Kyoto - the soap is already sold out. Have no fear, I'll be reviewing Kyoto, Madagascar and Sicily with the scents described as:

For the sake of completeness, be sure to check out the introduction of their 2017 lineup along with first impressions but especially all the individual scent reviews (with the new 2018 scents at the bottom):

Let's talk briefly about the major change that #TallowAndSteel has made (the prior 2017 releases will follow suit - perhaps by the winter). The original soap (v1) was already very good, but was reformulated in 2017 (v2) and again for 2018 (v3) to keep making it better. The v1 formula was more "traditional" and v2 improved upon it in many ways. Interesting to note that there are no butters to be found in the formulas... But look closely at what is. That's good stuff. The latest formula was tweaked to provide a cleaner base to let fragrances shine through (the main focus) and improve slickness. It also seems a little bit easier to lather. Overall though, it's rather similar to the prior version. Let's compare all three ingredient lists:

One thing hasn't changed. The original aftershave was also very good, but was reformulated in 2017... For 2018 it remains the same. While the ingredient list is similar to the old, it has added floral hydrosols and overall much improved - promising a really nice face feel and lighter than before. It's still essentially water based, but does contain alcohol by way of the witch hazel distillation. No worries, it can still be shipped worldwide. Let's compare the ingredient lists:

There's one last thing worth mentioning, and that's the packaging. It remains the same as the 2017 line-up save for one scent, and that's today's Kyoto. It features the same style artwork, albeit simpler and more stark; but the labels have a linen texture - it adds an extra layer of luxury to an already excellent aesthetic. Overall, the 2017 and 2018 scents all form a cohesive, well-branded line.

So let's talk about the scent of Kyoto which surely many are wondering about. Officially, it's described:

With yuzu as the foundation of the blend, the zesty citrus is combined with vegetal marine notes from a homemade extract of Japanese sencha (green tea) and nori (seaweed). It further progresses into a green woodsy blend of flora native to Japan: Sugi (Japanese cedar), Hinoki (Japanese cypress), Hiba (Japanese cypress), and Shiso (perilla).

So, distilled down it has notes of yuzu, hiba, hinoki, sugi, shiso, sencha and nori. That probably doesn't mean much to most (non-Japanese speaking) people. Translated, the notes are yuzu, cypress, cedar, perilla, green tea and seaweed. What you might notice about the 2018 line is that scent notes are all followed by a percentage in an attempt to better inform people about dominant notes. Though it should be said that it doesn't give the whole picture, as some notes are more intense than others.

Let's talk about real world experience (from the aftershave, as it should be). On open, it's primarily a unique, sweet, citrusy yuzu tempered by the green tea and seaweed - countered by cedar and (dual) cypress undertones. The yuzu, being citrus, burns off fairly quickly, allowing the green notes to temporarily come forward for the middle, bolstered by the perilla, which is a spicy, earthy vibe. The scent quickly settles into the base and brings the wood notes from earlier fully to the front, while the perilla moves to the background. Overall, the scent very much recalls a chypre style fragrance without using the obvious favorites of oakmoss or patchouli for the base. The perilla fills that role quite nicely.

Aftershave performance... One big disappointment with nearly all of the Tallow + Steel scents is the lack of longevity. In fact, Kyoto only managed 1-2 hours of longevity. Ryan confirms that longevity is their least important focus when making scents and the natural oils (as opposed to synthetics, which they do not use) fade more quickly. Related; don't plan on any EdT to be forthcoming - most scents don't really lend themselves to that anyway. All that said, the scent of Kyoto can provide a nice segue for any citrus, woodsy or green EdT/EdP of your choosing.

Soap performance... A brief recap: as mentioned above, it's rather similar to the previous version. The scent does seem to shine through a bit better without the base coloring it. So a checkmark in that column. Slickness also seems somewhat improved, though it's essentially outstanding in both formulas. Likely the result adding safflower oil. Lathering seemed a bit easier, though it wasn't an "official" goal of the reformulation. The lather was abundant; dense and very creamy with excellent primary and secondary slickness.

Hardware for today included the all-black #StandardRazors razor with a fresh #PolSilver blade. The obvious choice for today's brush seemed to be the Vlad made by #GrizzlyBay and sports a 26mm Blood knot. The #GTP scuttle rounded things out.

After one use, a quick recap. Like all Tallow + Steel offerings, they're a bit pricey because of the ingredients and shipping from Canada but of the highest overall quality and absolutely unique scents - which like most offerings, lacks longevity in the aftershaves. Kyoto itself is the best packaging yet from Tallow + Steel and scent-wise is truly high quality, unique and beautiful but yes, unfortunately - is among the shortest in terms of longevity. No regrets; this is a fantastic starting point. Check out the next review, covering Madagascar!

Now that I've completed all three reviews, I thought it might be nice to add an overall impressions section coalescing my thoughts.

The soap formula has had some tweaks; mainly to eliminate coloring of the scents and add slickness. A side effect, seemingly, is that it's easier to lather as well. At any rate, it's a sublimely dense and creamy lather with excellent primary and secondary slickness. While the aftershave has essentially remained the same, it offers excellent healing and moisturization, without the burn of alcohol (it can be shipped worldwide) or tackiness. Both products are firmly within the top tier of artisanal offerings as far as performance metrics, branding and overall cohesiveness and originality. The scents overall run the gamut from very approachable to genuinely... Intense and out of the ordinary. There's something for everyone now and I'm honestly anxious to see what other locales may be represented in the future. The unique inspiration for scents is a unique and satisfying hook.

In true Tallow + Steel fashion, all three of the new scents take you to a far away land, combing notes that are largely sourced from the locale in question. While the 2017 offerings were a little more adventurous and "out there" the 2018 offerings serve to make scents that are more approachable; perhaps none better than Sicily. However, both Kyoto and Madagascar while in the same vein, are a bit more exotic - offering a more complex olfactory journey that's more encompassing than your average fragrance.

I should say many will be pleased with any or all of the Tallow + Steel scents, overall performance and the statement they make on your shelf. Truly well done.