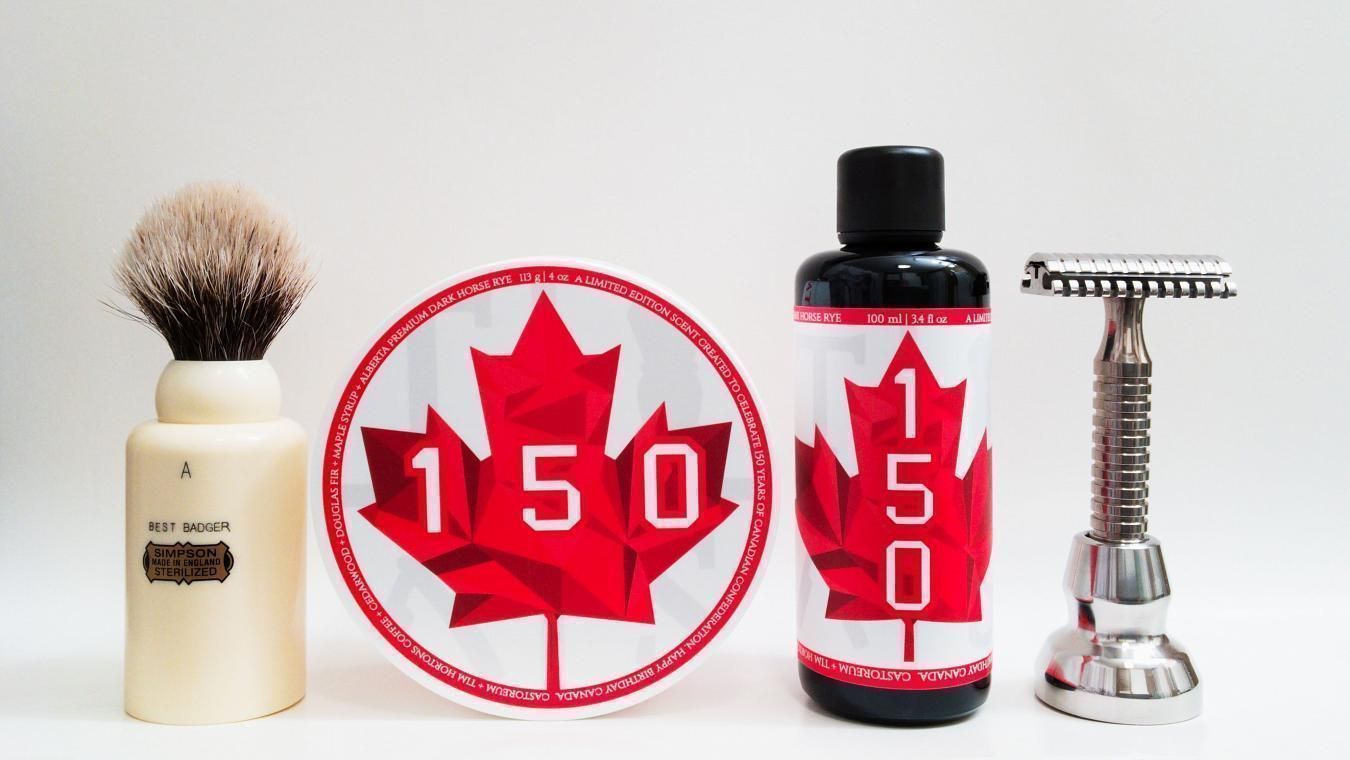 Introducing the most Canadian grooming product ever created: 150, by Tallow + Steel. This is a Limited Edition soap and aftershave made to celebrate 150 years of Canadian Confederation. Happy Birthday Canada!

150 is an interesting scent, not too unlike the prior generation's Dark which it (slightly) recalls for me. Not that it smells like it per se, rather has that #tallowandsteel "signature." That is - it's different than what you might be used to. Officially, the notes of 150 include castoreum, Tim Hortons coffee, cedarwood, douglas fir, maple syrup and Alberta Premium ‘Dark Horse’ rye. That first note is the... Interesting one. Castoreum is the exudate (a yellowish secretion) from the castor sacs of mature North American (Castor canadensis) and European (Castor fiber) beavers. They utilize castoreum in combination with urine to scent mark territory. But wait, it gets better. Beavers have a pair of these castor sacs and a pair of anal glands, located in two cavities under the skin between the pelvis and the base of the tail. Have no fear though, this isn't some kind of beaver ass milk.

You're probably thinking, "WTF?" Truth be told, castoreum has been used in perfumery for centuries - as an animalic note suggesting leather. Some classic perfumes incorporating castor are Coty Emeraude, Chanel Antaeus and Cuir de Russie, Lancôme Magie Noire and Caractère, Hechter Madame, Givenchy III, Guerlain Shalimar and many "leather" themed compositions. As you might imagine, it's quite intense and pungent. It's often aged up to two years to mellow it out, before being tinctured in alcohol. Tallow + Steel acquired theirs locally and already aged, back in 2016... Producing the tincture in-house.

So, onto the overall scent. Yes, it smells of castoreum; animalic, musky and leathery. But it's tempered very well by the other notes... The cedar and fir (both sourced from within Canda) give the scent an overall woodsy vibe. More subtly, the coffee (which is dark roasted) is what reminds me of Dark a bit, ironically, and sweetened ever so slightly by the maple syrup. The rye itself is rich and full bodied and when consumed, it features leather, vanilla, banana, and a bit of bitter dark chocolate nuances after an initial touch of sugar. Scent wise, it's dark and slightly sweet, complementing the maple syrup very well. If you look at the individual notes, it definitely screams "Canadian!" But the accord itself is more general; outdoorsy. Leather and wood, with a subtle sweetness.

The scent strength is a light medium with a surprisingly short longevity of at most two hours. It's by design, actually - as it was meant to be a light scent. Castoreum when fresh(er) and in higher quantities can easily overpower every other note in a fragrance. Here it was used wisely - and lightly. You smell it most on open, but it quickly mellows out amongst the other notes. In fact, after only an hour I could barely detect it. I just layered another scent for the day.

The sets of 150 soap and aftershave were extremely limited (150 in total) and only available within Canada as the alcohol in the aftershave prevented shipping to the states... And besides, it was meant for Canadians (if you couldn't tell). Luckily, I have resources strategically placed around the globe and I contacted my very special Canadian agent to secure my set. Okay, somewhat tongue in cheek... But I have my ways!

Hardware for today's shave consisted of the #TimelessRazor in the "aggressive edition" with a #PolSilver blade on shave five (though technically four, as I stuck with the open comb side). I had four days of growth to mow down once again (I work from home on Fridays and usually don't shave until Monday morning) and this razor is a beast on a mission. The first pass could've easily sufficed... Seriously. After the third pass, it was pure BBS bliss. I seriously enjoy these Monday morning shaves like none other. And when backed up by high quality software such as this... The #Simpson "The Major" brush is new(ish); sent to me by a buddy in Birmingham, England. Really, really stout travel brush. It's tiny (especially when unscrewed from the sleeve, which I left on as I use a #GTP scuttle) but generates impressive (if diminutive amounts of) lather and has a surprising(!) amount of backbone in a dense knot of best badger. I'll be using it exclusively for a week soon; a quick vacay.

As expected, and incredible shave with great hardware and software. What was a little unexpected though, was what this scent would actually smell like, considering the listed notes. It was done very well, I must say. Overall quite light. The initial open is a bit... Unusual. But it quickly mellows and makes for a really nice scent. Leathery, woodsy, slightly sweet. While the overall performance was absolutely excellent (as I've found in my reviews of each of the new scents in the 2017 line) I was only disappointed in the fairly short longevity of the scent. While light by design, I'd have preferred a bit more staying power.