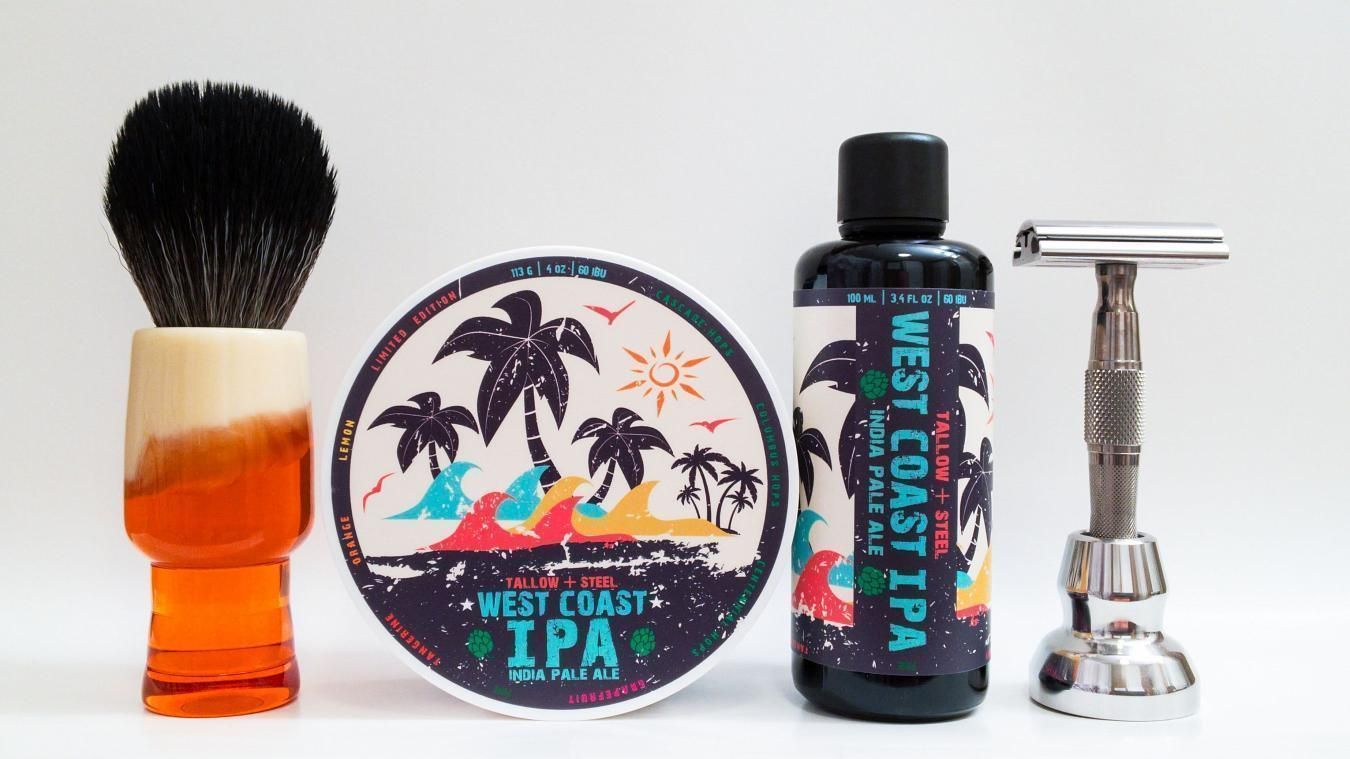 99 Bottles of beer on the wall, 99 bottles of beer... Take one down - and shave with it! India Pale Ale (IPA) beer fans rejoice - and enjoy Tallow + Steel West Coast IPA #soap and #aftershave - a limited edition from their all-new 2017 lineup!

Hang ten, hit the lip, and then chill out and enjoy the hoppy aroma of a freshly poured India Pale Ale.

We have teamed up with three premier beer aficionados from the craft beer capital of the world, San Diego, California, to bring you a limited edition product that captures the aroma of a West Coast style IPA - a perfect balance of hoppy bitterness, pine and citrus.

West Coast IPA officially has notes of (extracts from) three American hop varieties (Cascade, Centennial and Columbus) combined with the essential oils of pine, grapefruit, tangerine, orange and lemon. It's worth pointing out that the existing, natural hop notes are enhanced by the citrus essential oils - they're not simply add-ons. Cascade hops smell floral, citrusy and spicy, Centennial hops smell citrusy and spicy and Columbus hops smell earthy, citrusy and spicy. All three are about medium on aroma, and slightly bitter. This is what you smell primarily, with a hint of pine underneath. While both the soap and aftershave give you citrus pops, the aftershave is a bit stronger in this regard.

Overall, it does not really "smell like beer" but is more reminiscent of beer, without the boozy or gawd forbid, stale aspects. You smell the herbaceous and bitter hops (with a hint of pine beneath) and citrus dancing about your nose - like lifting a pint of a nice, cold craft IPA to your mouth on a hot day. The citrus is well-balanced as you get equal amounts of each. You can envision the flavor, either within the brew itself or perhaps a slice of your favorite garnish clinging to the lip of the pint glass. Tallow + Steel really nailed the olfactory experience here. While the scent strength of the software is on the higher side of medium it's unfortunate that actual sillage is relatively mild and longevity rather brief. Much like 150 in that regard. I'd strongly suggest layering one of your favorite scents on top if you're headed out.

Interesting to point out, that the soap is an earthy green color - whereas the aftershave is more of a yellowy ochre. This is from the hops, which are green. Not to worry, the lather is white as normal (and won't unduly stain natural haired brushes). Something else worth noting is that the hops and/or citrus could potentially irritate the faces of the more sensitive of you out there. I've heard of one such case already. Finally, why is it called "West Coast" (IPA) you might ask? Because it was inspired by the craft beer scene in what is arguably the largest in the country... San Diego. If there's any doubt, peep the sheer number of breweries there. Yeah.

Today's hardware was made for this day! The #TimelessRazor "mild edition" with a #Stork handle and a #PolSilver blade on shave four handled the cleaving task at hand, but what really stands out is the #ThatDarnRob brush... Today's pairing is what I had in mind before today, finally realized. The BOSS knot easily handles softer, gooier soaps like this one from #tallowandsteel with aplomb (as do most of these newer breed synthetic knots with more backbone). The #GTP scuttle brought up the rear and kept the suds nice and warm.

A real beer connoisseur's shave today, with West Coast IPA! Between the brush and the software, the illusion is complete. The scent absolutely nails the IPA experience but like the beer, it might not be for everyone. Performance-wise, this is your typical Tallow + Steel profile - outstanding.