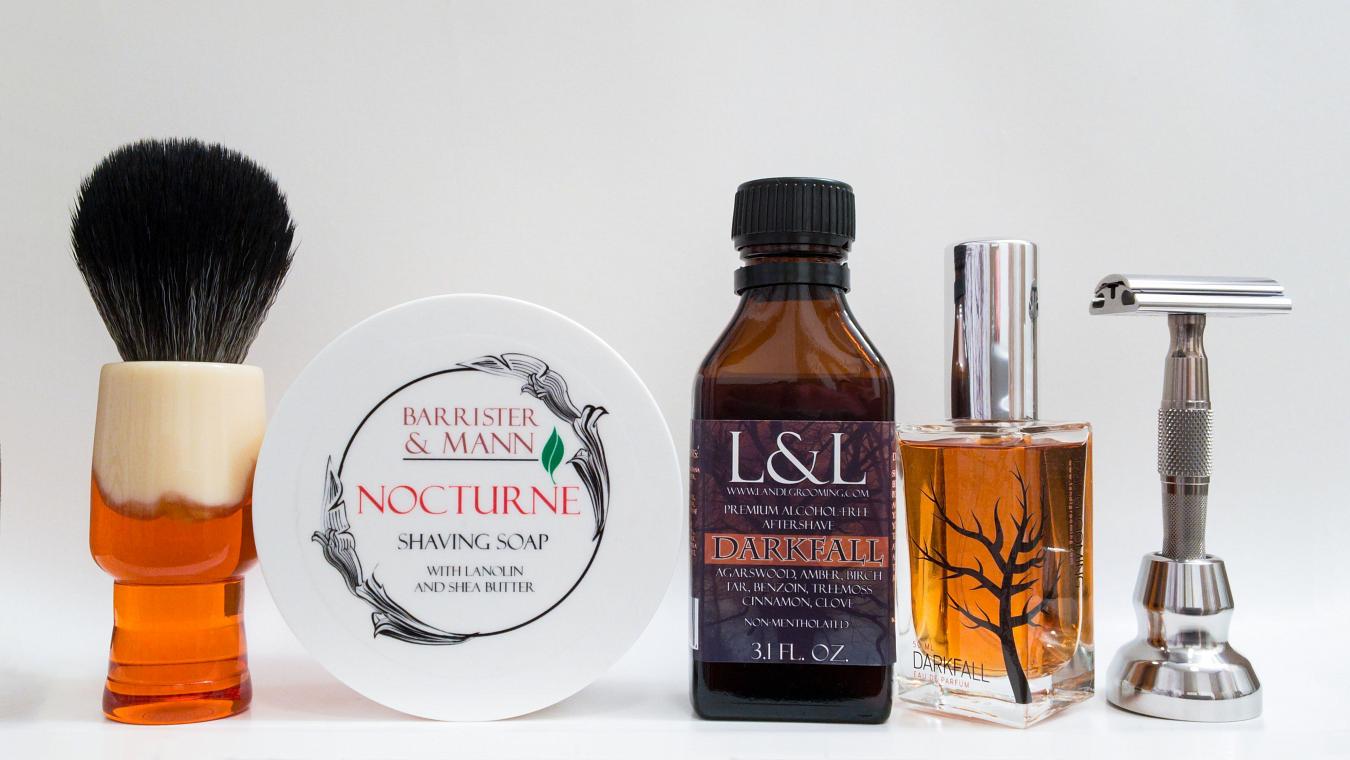 It's a chilly, wet fall day - and I'm callin' out some bullshit - with a guest appearance by Barrister and Mann Nocturne #soap and L&L Grooming Darkfall #aftershave and #EdP.

If you don't have anything nice to say - don't say anything at all.
- yo' mamma

I had in my mind yesterday to do a SOTD with #BarristerMann Nocturne today. There's no matching aftershave, but after taking in the scent - it was only natural to go with #landlgrooming Darkfall with a finish of the newly released EdP. I've reviewed Nocturne in-depth and I've reviewed Darkfall in-depth (complete with EdP) before. The latter much more recently than the former. Long story short, they're both of the "leaves n' smoke" genre, so popular this time of the year. Instead, I want to talk rant about something else...

As I noticed the very similar scents of these two artisan's products, I was still thinking about this recent bullshit on Reddit. I know, right? Because #drama. But follow along. I wrote about this very software (Night Music) and the reaction(s) almost exactly a year ago. Sadly, things haven't changed.

For starters, if you're judging a scent simply by the scent off of a dry puck of soap... You look like a total noob (and a foolish one) at best. But it takes a special kind of schmuck to take to social media and declare, "this soap smells like shit" (notice also how the herd piles on). For starters, this is someone's passion and livelihood you're talking about. Secondly, think of how that might affect the artisan - in this case, Will and his family - especially his mother, who was the inspiration for the scent. Furthermore, the scent was based on Guerlain Shalimar. So if you're going to call this particular scent "crap" then you're saying the same about a scent from the great house of Guerlain (which both happen to be quite popular and have been around a little while)... So excuse me if I look at your statement as an even bigger load of crap.

If you don't like a scent, hey - that's cool. Not everyone will like every scent. Simply say, "it's not for me" and move on. There's no need to take it to this level.

Now let's consider the impact of this brand of idiocy. Remember Barrister and Mann Ferox soap? Probably not. Because what happened was that at one point someone said that the scent reminded them of Italian chicken seasoning - after which sales plummeted and Ferox was ultimately discontinued. What does this have to do with today's choice, Nocturne? When that came out, people piled on and cried about the smokiness of it. Some had skin reactions to it (and you're excluded from this rant). Again, long story short - Nocturne is history. When Tallow + Steel released Morocco earlier this year, people complained about the smokiness in that, too. The result was Ryan dialing it back (in the soap, at least). Starting to see a pattern here? Fans of The Smoke have lost one product and another one changed. Don't even get me started on [motherfuckin'] Roam. No other smoky scent has gotten more flak than this one, causing it do be on and off again since it was introduced in 2013.

Also odd, is that it's largely Barrister and Mann that is subjected to these bashes. While the aforementioned Morocco got some kickback, it was relatively minor. Stirling Soap Company Texas on Fire got a lot of mention because of it, but again, it was relatively minor (and at least, remains unchanged and still available). Why does this happen to an artisan that we can probably all agree on - is one of the finest in this market? Probably for the same reason hackers target Microsoft Windows - it's a big, easy target with good returns. If you complain about an artisan that nobody's heard of, it won't have the same impact as attacking one of the biggest and most established. I hate to mention Barrister and Mann so much today, but they're the most visible example - there are plenty of other artisans affected by this.

I submit also, that Barrister and Mann is willing to take risks and bring us amazing scents into our daily routine. Who else makes scents that are regularly described as "polarizing?" Often, they're takes on interesting scents - like "leaves and smoke" as is the case with Nocturne - or more often, an established, if not long gone fragrance... All of the Barrister's Reserve scents, for example, are (faithful) recreations, including Gillette Sun Up, Flöid Blue, Shulton Old Spice Houbigant Fougére Royale and Caldey Island Lavender. The aforementioned Guerlain Shalimar that is Night Music or Guerlain Cologne Russe that is, well, Cologne Russe. Very few, if any really - bring us this level of perfumery to our little "hobby."

Would you rather every soap just smelled like sandalwood and call it a day? Nothing to bitch about then! Or, if it wasn't for them - we'd all be shaving with Barbasol. But seriously... Think before you bash an artisan online. Granted, I've been fairly outspoken about my distaste for Phoenix Artisan Accoutrements - but that's for a whole host of reasons (and mainly business practices). You're not just catering to an audience with your brash claims - you're affecting the artisans themselves, and fans of their products. Case in point. Notice that Will, who's been wonderfully approachable online - has basically taken a break from the whole thing of late? <sarcasm>So, thank you for that.</sarcasm>

Lastly, don't send artisans (any artisans) hate mail because you don't like their scent or their labeling ruffles your religious feathers. If you don't like it, don't buy it. I've spoken to numerous artisans that have received just that, and frankly, I'm appalled at what some of you are capable of. Dafuq is wrong with you?

Anyway... Rant over. Hardware for today included the #TimelessRazor in a "mild edition" customized with a titanium #Stork handle and a #PolSilver blade on shave five. The #ThatDarnRob "beer" brush seemed apropos, considering the scent genre and well, because autumn. The #GTP scuttle did what it does best. Interestingly, after yesterday's insanely good shave I didn't have a real need to shave today... It was still quite close and not even what you might consider a 5 O'clock shadow on any other day.

So, yeah... A great shave today with some equally great products! Again, take it easy on the artisans, eh? They do what they do because they love what they do (and yeah, make some coin as well). Publicly broadcasting "your scent smells like shit!" (literally or otherwise) is pretty lame - for so many reasons. Personally, I'm eternally grateful to the artisans out there that bring us such amazing software (and hardware!) that we enjoy using every. Single. Day. To them I say, "thank you."