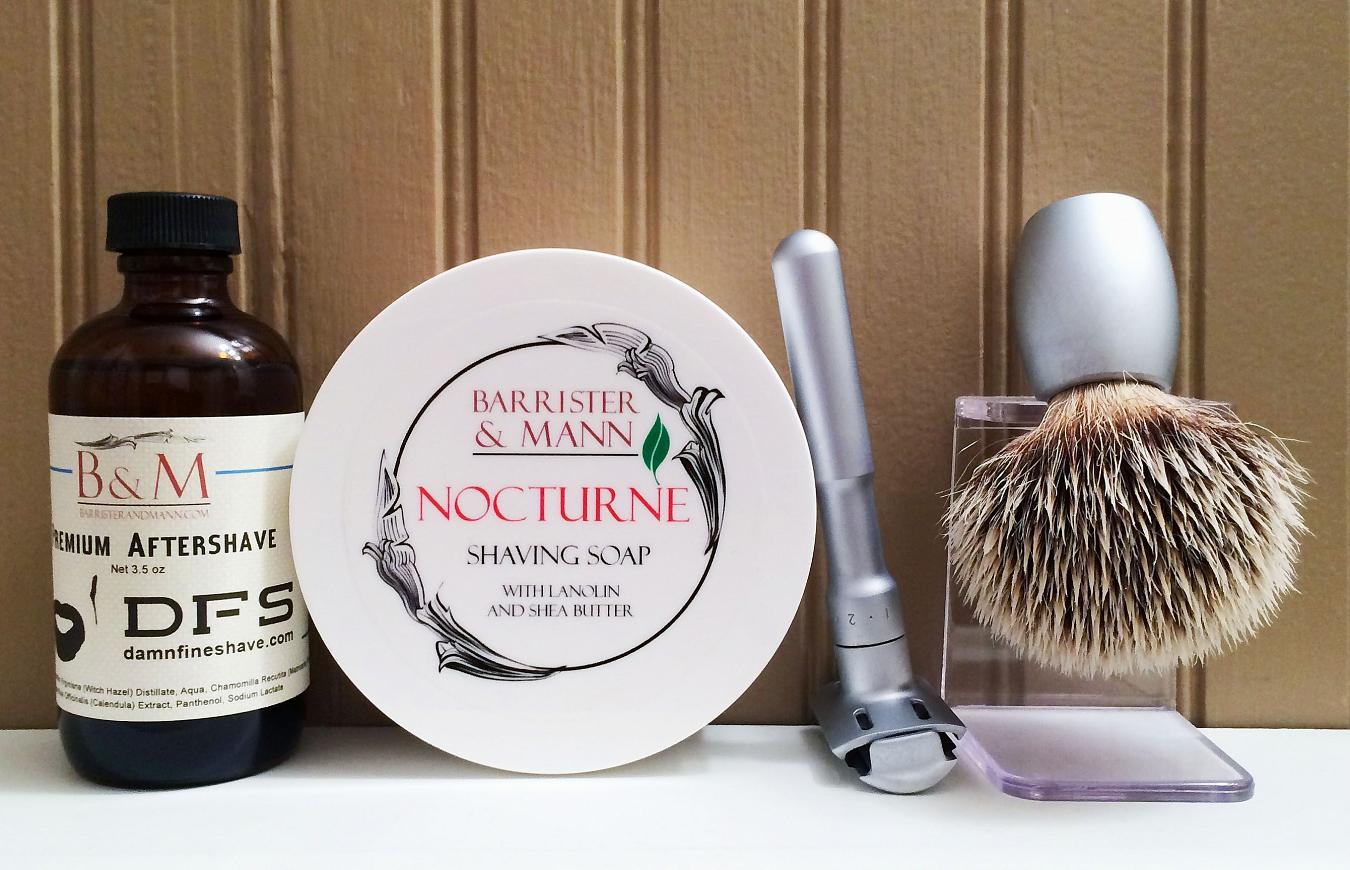 Nothing says "autumn" quite like today's selections for SOTD like Barrister and Mann Nocturne #soap and DFS #aftershave. Much to talk about today!

I recently took it upon myself to collect all things #barristermann and backfill my collection. Today's software were the latest acquisitions, and timely at that!

So let's start with the soap, Nocturne. Officially, it was described as notes of apples, newly fallen leaves, woodsmoke, styrax benzoin, and "the faintest touch of cinnamon." Most artisans, including Will, have said that soaps don't really lose their [scent] potency in the tub; the effusion of scent occurs during exposure to water and agitation. I'm not totally convinced, as I think at least a little fading occurs on the exposed surface. Either way, some soaps are clearly more potent than others - and Nocturne definitely falls on the lighter side of scent strength. Back when it was released (as early as September 2013) there was a bit of chatter (what else is new) about the smokey note. Lathering it up and shaving with it, there's no mistaking the apple, styrax benzoin (vanilla-ish) and cinnamon notes. The smoke was there, as was a somewhat earthy component. I didn't find it to be off-putting, but admittedly it was a little hard to pick out notes because of the scent strength - overall it was very... Autumnal. It goes without saying that the performance is typical "white label" - producing ample cushioning, creamy lather with very good glide and post-shave face feel.

The aftershave, DFS (Damn Fine Shave) is interesting. It was created for the forum of the same name exactly one year ago in October 2015; provided a threshold was met for the number of units (which it clearly was), then this batch would be produced. There was enough left over to be sold on the B&M site for quite a while after the release. Like so many prior B&M releases, I saw it, thought about it and for some reason or another, I passed. I know the strong branding played at least a part for me (despite being a member of the forum). The official notes are apples, cinnamon, cloves, oak, and berries. It pairs superbly with the soap. Because of particular notes, being fresher and an aftershave - the scent strength was decidedly higher on the scale than the soap by a fair margin. The apple and cinnamon were definitely there, but the berries are what stand out. The clove added a bit of twang to the cinnamon while the oak rounded everything else out. It smelled like a spicy, sweet potpourri. Again, perfectly autumnal.

Note: Some people may want to avoid both of these products as they contain lanolin (in the soap) and cinnamon (in both) which are two known allergens/irritants.

The hardware today included the #Merkur #Futur with the same #PolSilver blade from last week, on shave three - and on setting "3" for today, since I had a weekend's worth of growth to mow down. I was not disappointed, and I quickly remembered why the Futur is my favorite razor. Last week I used it at a setting less than one, its mildest - as well as a bit higher on "2" while today's setting of "3" easily adapted to my different stubble. I was easily left with a BBS shave and honestly, I could've stopped after one pass. The result actually surprised me a bit as I haven't had a shave this close, comfortable and smooth in a long time. The #Mühle #R41 is an aggressive sucker, but thanks to the open comb it's not nearly as smooth as this. The #Dovo silvertip badger brush seemed like a natural, matching fit and did the lather justice in the #GTP scuttle.

If you were to poll people on what fall scents are to them, you could distill the results into Nocturne and DFS, which are more similar than they are different from each other. Common notes of apple and cinnamon and other spices are exactly what the New England fall season is about (recalling spiced/mulled cider and apple picking). Each slightly different yet completely complementary - both lovely. Alas, neither Nocturne nor DFS will officially be back, but it's not out of the question (I asked) and I truly hope one or both come back as a fall seasonal.