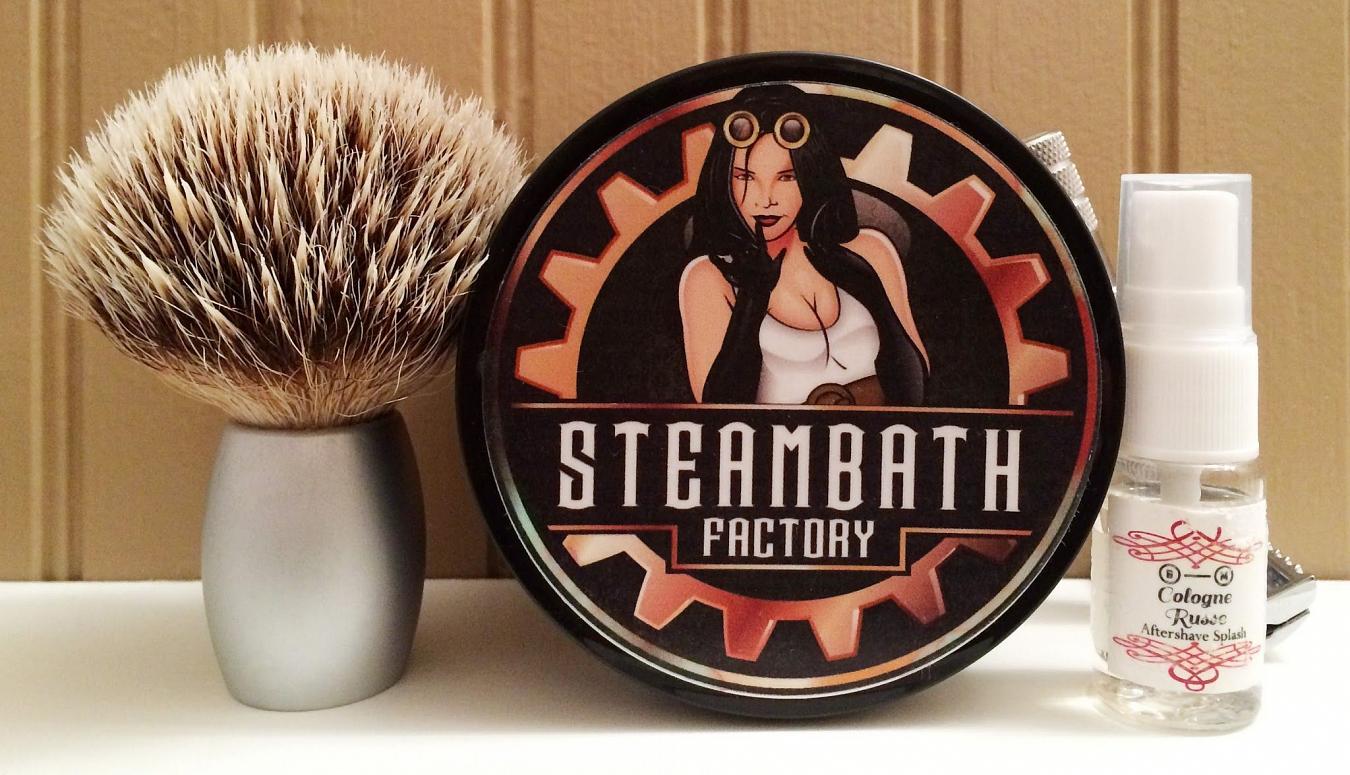 Steambath Factory is an interesting brand; there's not much out there about it. In fact, it was acquired by Tiki Bar Soap back in July of this year. Their original site is mostly defunct at this point, though Tiki Bar Soap carries it, as does Italian Barber. So not surprising it's not well known.

Wizard's Pipe is a nice scent... It's described as "a spicy blend of cherry with a base of burning pipe tobacco. It is not an overly sweet cherry scent, and although the cherry note is certainly there it also has a strong tobacco accord with a smouldering character." I found this to be mostly true; it's a Cavendish sort of blend; heavy on the cherry with a hint of spice. Though I'd disagree; it is fairly sweet - and certainly strong. Not totally my cup of tea, but tobacco fans should find this a nice option. Performance of the soap was very good - abundant, creamy lather with good glide. I admit, I was a little surprised. The branding, as far as the label is cool and $20 for 8.5oz. of soap is a good deal. Thumbs up!

The aftershave today was from #BarristerMann and a scent I've been curious about for quite a while. As is typical, I get around to trying it, find I like it - only to have the soap and/or aftershave finally sell out. Alas, I found it to be an enjoyable scent. It's complex and a little hard to describe. Notes of lemon, bergamot, petitgrain, and herbs dry down to violet, rose, bay, vanilla, and amber. The scent is distinctly warmer than most other cologne-type fragrances, owing largely to its inclusion of castoreum, benzoin, and vanilla. There's definitely a citrusy vibe to it, but the vanilla, amber and other components give it bit of a sour, darker side-note. Definitely interesting. Performance of the aftershave of course, is top-notch and typical of Barrister and Mann. Too bad the soap's gone at this point.

Hardware today included the #Mühle #R41 razor fitted with a #PolSilver blade on shave two, which made whacking a weekend's worth of growth a quick, efficient affair. The #Dovo silvertip badger brush whipped up the suds in the #GTP scuttle.

Two very interesting scents here that paired surprisingly well together. Wizard's Pipe is a bit of an unknown but proved to be a good performer, while the Cologne Russe is a little more well known, but a sleeper. Both are somewhat harder to get, because of limited distribution or being outright gone. Snap these up wherever you can if they sound interesting.