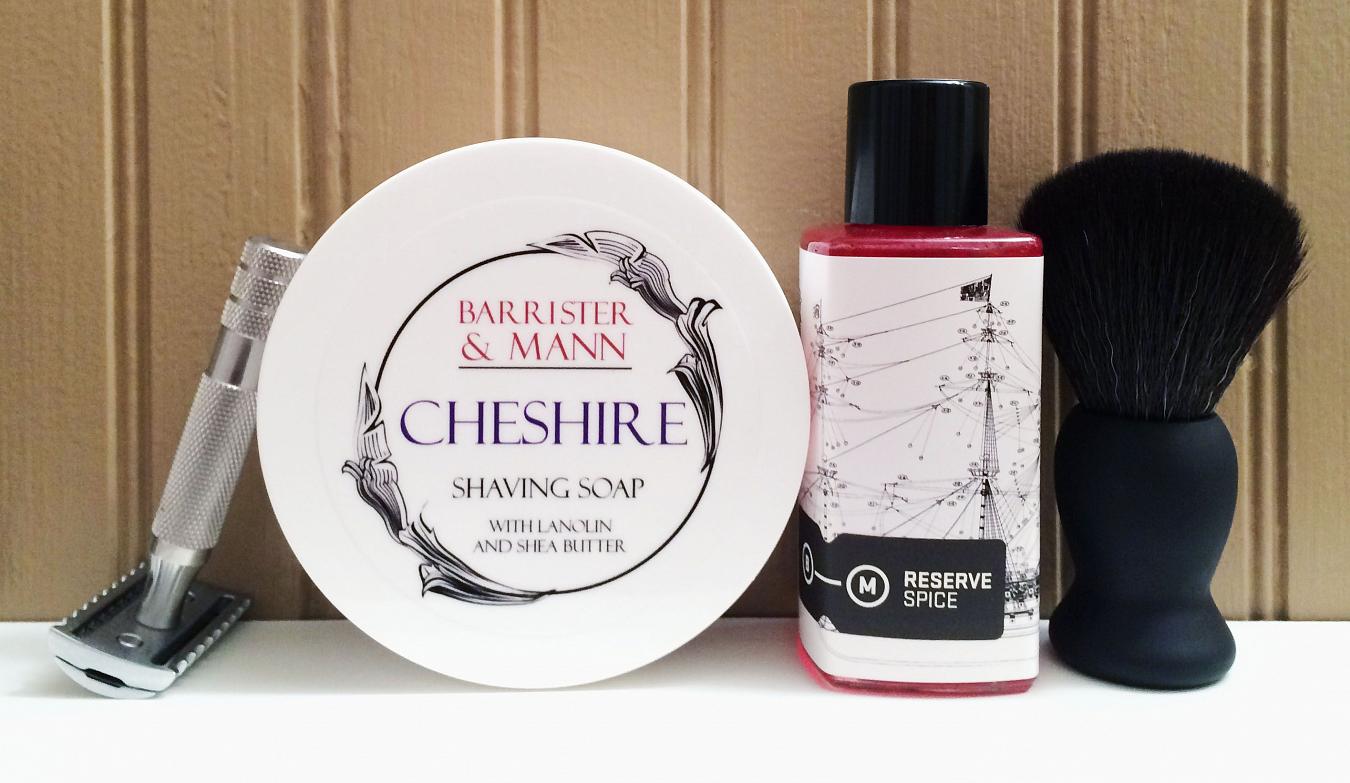 The name Cheshire is apropos, as I was smiling like a Cheshire Cat at the results of today's SOTD with Barrister and Mann Cheshire #soap and Barrister's Reserve Spice #aftershave!

I want to say I've reviewed Cheshire before, as I've used it at least once... Alas, I apparently didn't write up a SOTD for it. So here goes. Standard #barristermann white/black label performance, which is to say very good across the board. Ample creamy lather with loads of cushion, good glide and a solid scent strength on this one... Which is where the real story is. Officially, it's described as having notes of bergamot, clary sage, lavender and patchouli along with "this soap captures the classic essence of Earl Grey tea using only high-quality essential oils. The perfect complement to the morning routine of the discerning shaver." I'd have to agree, it smells very much like Earl Grey tea. Somewhat citrusy, more herbal... But with more complicated nuances brought forth by the floral lavender and earthiness of patchouli. So many great notes here, and they all play very well together to create a multifaceted accord that'll fit with just about any aftershave or cologne. It's a regular offering of B&M and has been in the stable since it was introduced in May of 2013. It will continue to be a regular offering and be updated to the new glissant formulation and packaging in early 2017.

For the finish, I went with Barrister's Reserve Spice because it's not only a great product, but I used an aggressive razor to mow down a long weekend's worth of growth. I suspected I'd need a bit of restorative action in addition to just scent, and of course - Barrister's Reserve did not disappoint on either count. Check out my first impression and full review of Spice for more info.

The hardware consisted of my #Mühle #R41 razor to whack down the aforementioned growth, which is soldering on with a #PolSilver blade on shave four... Which is relatively unheard of. I usually replace the blade after two, maybe three shaves. I was curious, and went ahead. It tugged a little, but left an incredible BBS shave in its wake! But the time has come for a new blade. Aggressive razors tend to tax them more, as does using them on heavy growth as well - and with a razor like this, you don't want to mess around. The Satin Tip #brush did a fine, fine job of whipping up the scentastic lather in the #GTP scuttle.

I picked up Cheshire rather late in the game, and that was my own mistake. I always like the sound of the scent, but never jumped on it - as I started getting into B&M somewhat late, and tend to prefer software combos of soap and aftershave. But since I decided to collect everything B&M I acquired it recently... And it's a keeper. Oh my, yes. There will be a matching Tonique aftershave sometime in 2017 from what I understand, so there's lots to look forward to besides the glissant reformulation and packaging!