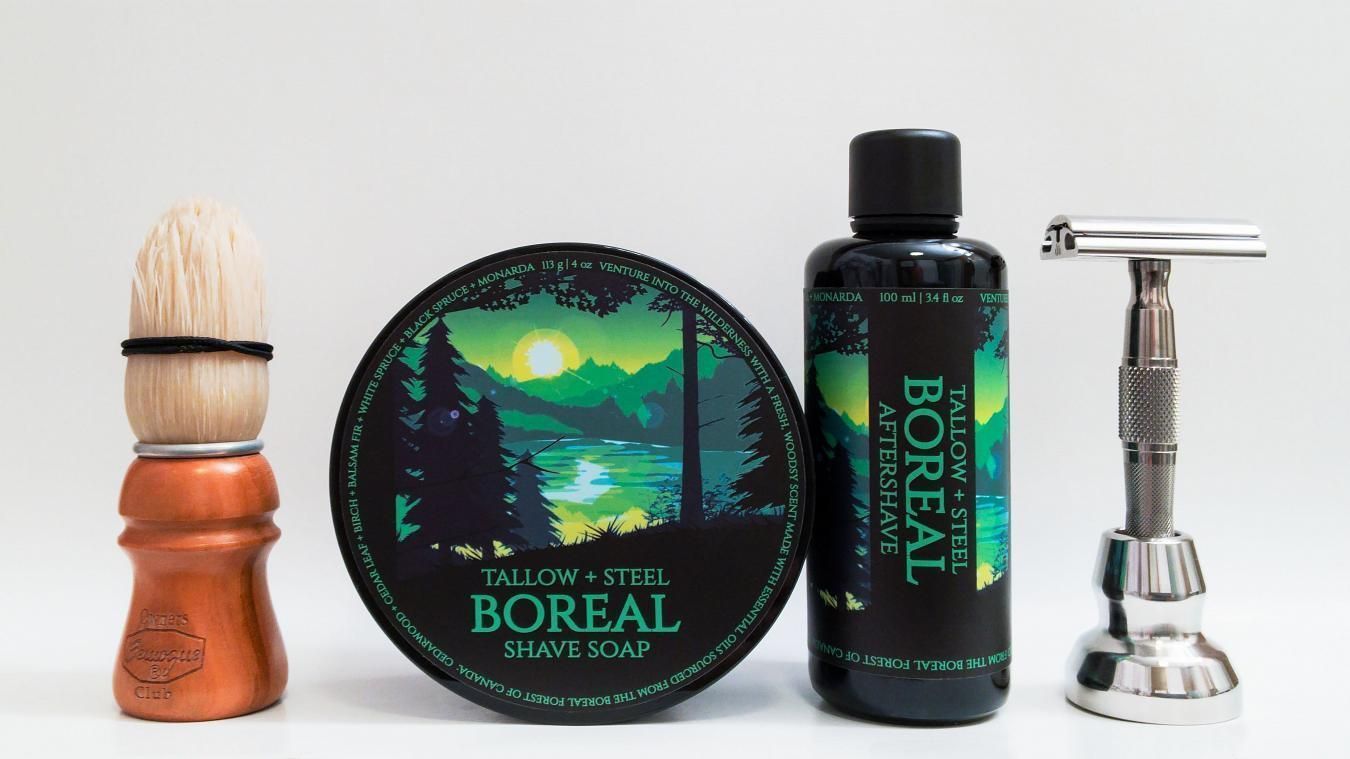 Close your eyes and take a journey deep into an alternatingly sunny and shady evergreen forest with Tallow + Steel Boreal #soap and #aftershave from their all-new 2017 lineup!

The vast expanse of the Canadian wilderness has an unmistakable fragrance to it—nothing compares to the richly wild scent of the forest after rainfall, when the air becomes thick with a mixture of competing smells.

Made from rare essential oils sourced deep from within the Boreal forest of Canada, the resinous woodsy scent of Canadian cedarwood and balsam fir, parallels those of sweet birch, spruce and monarda - a rare fragrant boreal plant.

Boreal captures the crunch of the branch underfoot, the sweet musk of the crisp autumn air: a blast of earthy freshness. This is a blend that puts you in the heart of an ancient forest, no matter where you are.

I'll preface this by saying that Boreal by #tallowandsteel is a nature (specifically forest) lover's dream come true. Someone had asked me yesterday if it were more like a "sawmill" or a "walk through the woods" meaning if it was just wood(s) or if there was more to it... It's definitely the latter. In fact, like I said in the lead paragraph... If you close your eyes and inhale deeply, you'll be well on your journey through a (boreal or taiga) forest (of Canada). What the hell is that, you ask? It's "a biome characterized by coniferous forests consisting mostly of pines, spruces, birch or larches." In other words, evergreens. In North America it's mostly spruces, and called a boreal forest in the southern area; taiga in the northern. If you look at the actual list, Boreal has notes of Canadian cedarwood, cedar leaf, birch, balsam fir, white spruce, black spruce and monarda.

That seems like a lot of "wood" at first glance... It's not that simple though. When I first huffed the fresh tub, I got a wintergreen vibe on top, but it was a little fleeting. That's actually from the birch, which contains a lot of methyl salicylate or simply, wintergreen oil. It combined well with the monarda (a.k.a. bee balm, horsemint, bergamot - not bergamot orange) that smells somewhat citrusy and floral. This lends a fresh, light air to the overall accord to keep it from being too dark and woodsy and adds complexity. But take it all in and you can definitely pick out the unmistakable balsam fir, which gives it that "pine tree smell" or at least, the needles - the rest of the tree you detect by way of the Canadian cedarwood and cedar leaf. The white and black spruce adds other variations of pine needles, with balsamic top notes and subtle undertones of sweet fruit; the latter being just a bit sweeter.

It's like you scrunched up a deep pine forest, balled it up in your hands and shoved it up your nose... It's fantastic. By far, the deepest, richest pine forest accord in shaving today. Most only add a touch of balsam fir for that vibe... Boreal cranks it up to eleven. Fear not though, it's not just "a whole lot of pine needle" as it's more complex. The soap and aftershave strength is fairly strong (yet mellows quickly) - with longevity being a bit on the shorter side of 2-4 hours. I was a little surprised at that, thinking (and wishing) it would last longer. But pine needle scents, regardless of who, what or where - tend to be on the short side. Except those pine tree air fresheners that you find in every car. But I'm not convinced that shit is even real.

Like all of the new scents, and as already mentioned regarding the sourcing of ingredients from the region, 10% of the profits from Boreal will be donated to Nature Canada, an organization dedicated to protecting nature, its diversity and the processes that sustain it.

Hardware today included the #TimelessRazor again in the "mild edition" with a #Stork handle and a #Feather blade on shave two, for a lovely, comfortable and close shave - without incident or drama - yet closer than most mild razors. I love this combo for daily shaving; it's replaced all else for me. The #SOC brush seemed a natural for two reasons. For one, the wood handle. Hello! Granted, it's cherry wood - but I digress. Secondly, as I mentioned in the Tallow + Steel 2017 - First Impressions post, as well as in reviews of both L&L Grooming and Barrister's Reserve soaps, which are all quite soft and goopy to load... I think a cooler, wetter, stiffer brush with a light touch is the best way to go. Sure enough. The #GTP scuttle kept things righteous.

What can I say? If you're a fan of The Great Outdoors™ and pine forests in particular, that smell of camping in the woods... Boreal is the boldest, baddest shaving software in the genre. Seriously, it's good stuff. My only negative is that it doesn't last that long as a scent, but that's not the fault of Tallow + Steel or the ingredients - or anyone else for that matter. Just the nature of the beast. Pine needles as a scent (whether by balsam fir, white or black spruce) is rather volatile. Cedar is the same way (look at Pitralon for example; it's almost nothing but cedar oil and it too vanishes in short order). I'd back it up with a nice, woodsy cologne. Regardless, pro- and post-shave is just phenomenal with this selection. Other than the limited edition and Canada-only release of 150 this is as "Canadian" as it gets. Go for it!