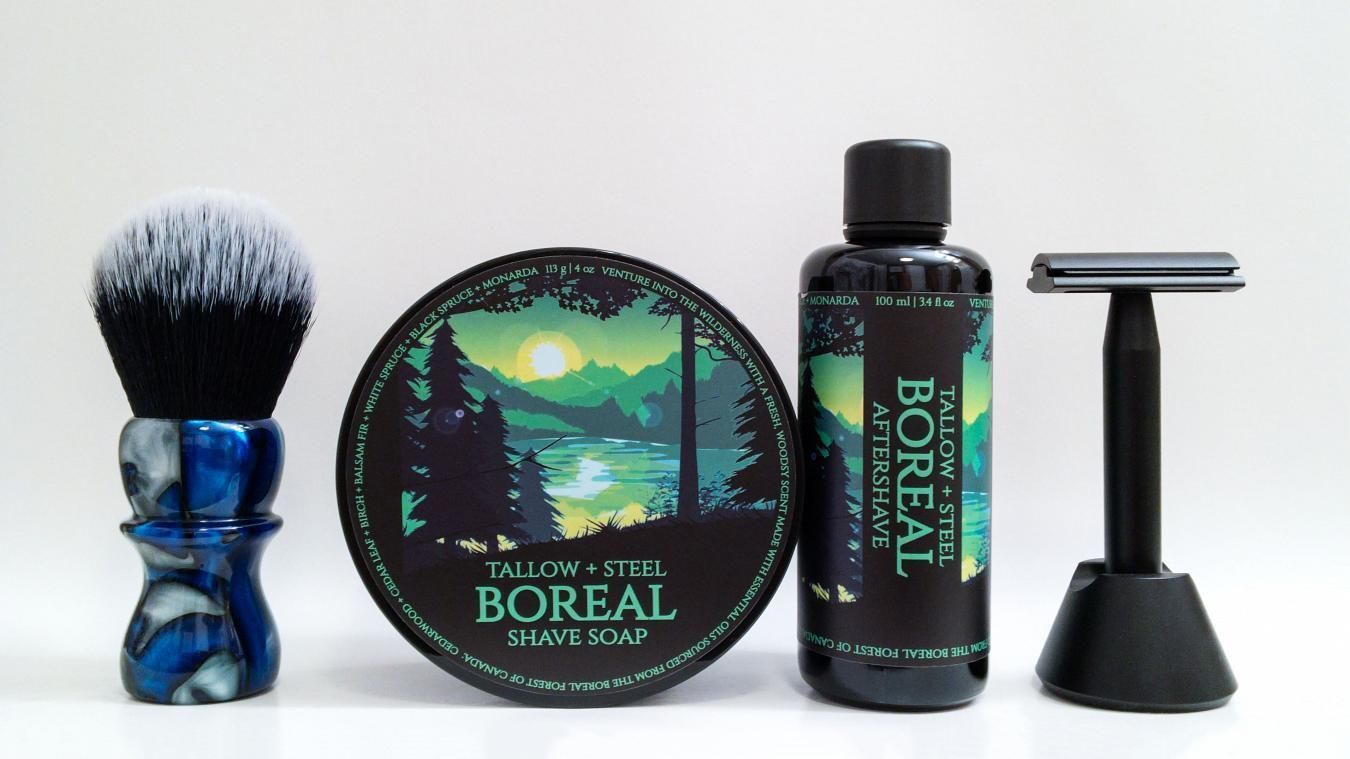 Fresh from a vacay up in forested New Hampshire straight to the Canadian forest with Tallow + Steel Boreal #soap and #aftershave from their all-new 2017 lineup!

The vast expanse of the Canadian wilderness has an unmistakable fragrance to it—nothing compares to the richly wild scent of the forest after rainfall, when the air becomes thick with a mixture of competing smells.

Made from rare essential oils sourced deep from within the Boreal forest of Canada, the resinous woodsy scent of Canadian cedarwood and balsam fir, parallels those of sweet birch, spruce and monarda - a rare fragrant boreal plant.

Boreal captures the crunch of the branch underfoot, the sweet musk of the crisp autumn air: a blast of earthy freshness. This is a blend that puts you in the heart of an ancient forest, no matter where you are.

I've written two very extensive articles on the new line, the first being Meet the All-new Tallow + Steel Products with the follow-up Tallow + Steel 2017 - First Impressions which covers the reformulations and performance (besides other aspects) so I won't repeat all of that here. I also won't get into the scent again as I reviewed Boreal extensively before. Suffice to say, it works good, smells good!

The hardware is quite a bit different today, however. I still had a relatively fresh #Feather blade in the #StandardRazors razor which I had on vacay with me, so I just rolled with it - here on shave two. Also, instead of the SOC I used my custom #WildWestBrushworks brush (with a Maggard Razors Black knot - a.k.a. Tuxedo knot) and it worked perfectly with this (and other) soft soap formulas. Loads well, doesn't twist the knot up like on softer brushes and blew up the lather in the #GTP scuttle. Normally, I'd go with my all-black Satin Tip brush (as I had with me on vacay as well) but I couldn't resist the Wild West Brushworks brush - it's been my daily driver since I got it, and I missed it...

I really love Boreal - not just as a scent, but overall, performance-wise. The new lineup is really nice stuff. This scent is definitely one of my favorites though... Woodsy, wintergreen. Very "foresty."