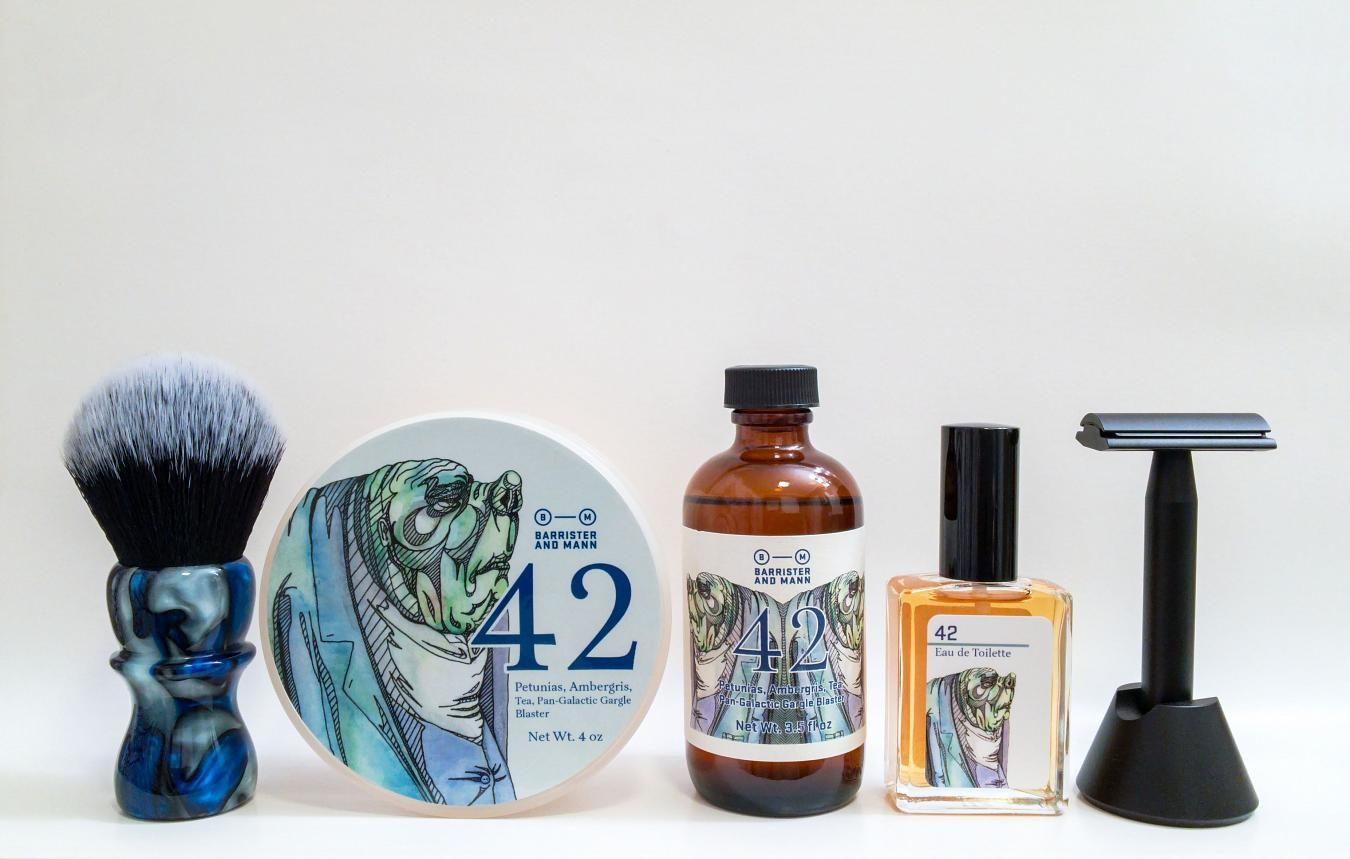 You know spring has arrived when Barrister and Mann 42 #soap, #aftershave and #EdT become available (May 1st this year) for Towel Day (celebrated May 25th) - so plan ahead!

For Towel Day, the commemoration of Douglas Adams’ authorship of The Hitchhiker’s Guide to the Galaxy, Barrister & Mann presents our tribute to his brilliant work: 42, a soap that smells of petunias, ambergris, tea, and Pan-Galactic Gargle Blaster (lemon sugar). Grab a copy of the Guide, a cup of tea, and your shaving brush; it’s going to be a hell of a ride.

42 is a lot like Rhapsody (with my new review of it) in the sense that it's software I've owned and used since April 2016 - yet somehow never managed to actually review. Today's the day to rectify that! I've also done a lot of reviews of #BarristerMann goodies over their history - in fact, almost every product they've released! Click on the hashtag to browse them all, or check out the History of Barrister and Mann for a more targeted approach. Regular readers should be well aware of the performance of both soap and aftershave, the former being in the Glissant and the latter in Tonique.

A brief background. 42 debuted in May 2015 and is named so because it's the "Answer to the Ultimate Question of Life, the Universe, and Everything", calculated by an enormous supercomputer named Deep Thought over a period of 7.5 million years in the book Douglas Adams' The Hitchhiker's Guide to the Galaxy (and unfortunately, no one knows what the question is). So what's with this Towel Day thing? Another nod, as “A towel is about the most massively useful thing an interstellar hitchhiker can have” and meant as a tribute to the author and the book; it is traditionally celebrated every year on May 25th. It had its start back in 2001, only two weeks after Adams' death on May 11th. This is why releases of 42 often include a Limited Edition shaving towel (this year's being a fifth anniversary of Barrister and Mann edition).

So let's talk about the scent of 42 then. Officially, it has notes of petunias, ambergris, tea and lemon sugar. You may recall in my recent review of Jacinthe that I compared it, 42 and Adagio together, and that 42 kind of fell in the middle, with "neither fruit nor floral standing out." While true, it should be noted that the petunia note is strong - but it's balanced by the lemon sugar. Ambergris is an interesting substance in and of itself, and smells animalic/musky and sweet - bridging the petunia with (and enhancing) the lemon sugar; keeping it from being too citric/sharp in the nose - while also serving as a fixative. The tea note is very much like a good black tea; almost smoked. Along with the ambergris, they pull back the floral and fruit just enough and because of this, I find 42 to be a wonderfully blended accord. Thus Jacinthe is more floral and Adagio more fruity with both being somewhat green.

One thing I added later on when it became available on May 25, 2017 was the Eau de Toilette. The 42 aftershave itself doesn't have great longevity itself, despite the floral petunia (which tend to linger) and in part because of the lemon sugar (citrus notes are quite volatile and short-lived). Thankfully, the EdT boosts the signal with light sillage and medium longevity of 6+ hours (which is reflected in the chart above). That said, what remains on the base is mainly a balance of petunia and the sweet, musky ambergris with the slightly smoky black tea just underneath. Really a lovely scent, if a bit light.

Hardware consisted of the all-black #StandardRazors with a #Gillette 7 O'clock (black) blade on shave three. The awesome #WildWestBrushworks brush flying "the Daily Lather colors" has a solid 24mm Tuxedo knot in it. A fantastic synthetic knot and probably one of the most popular; it debuted not too long after the (somewhat infamous) Plisson style knot and before the myriad array of synthetics now available. The #GTP scuttle, it goes without saying, played its usual role.

An interesting shave today; not the best. After a very close shave like I had yesterday it can sometimes be challenging as my face doesn't shave well with very short stubble. Also, I think the blade detracted a bit. While these used to be my go-to, I find that PolSilver blades work much better for me, generally. Nevertheless, it was close enough for a DFS and of course, the software smells fantastic. It's a springtime classic at Barrister and Mann so be sure to grab your set on May 1, 2018 when it becomes available again!