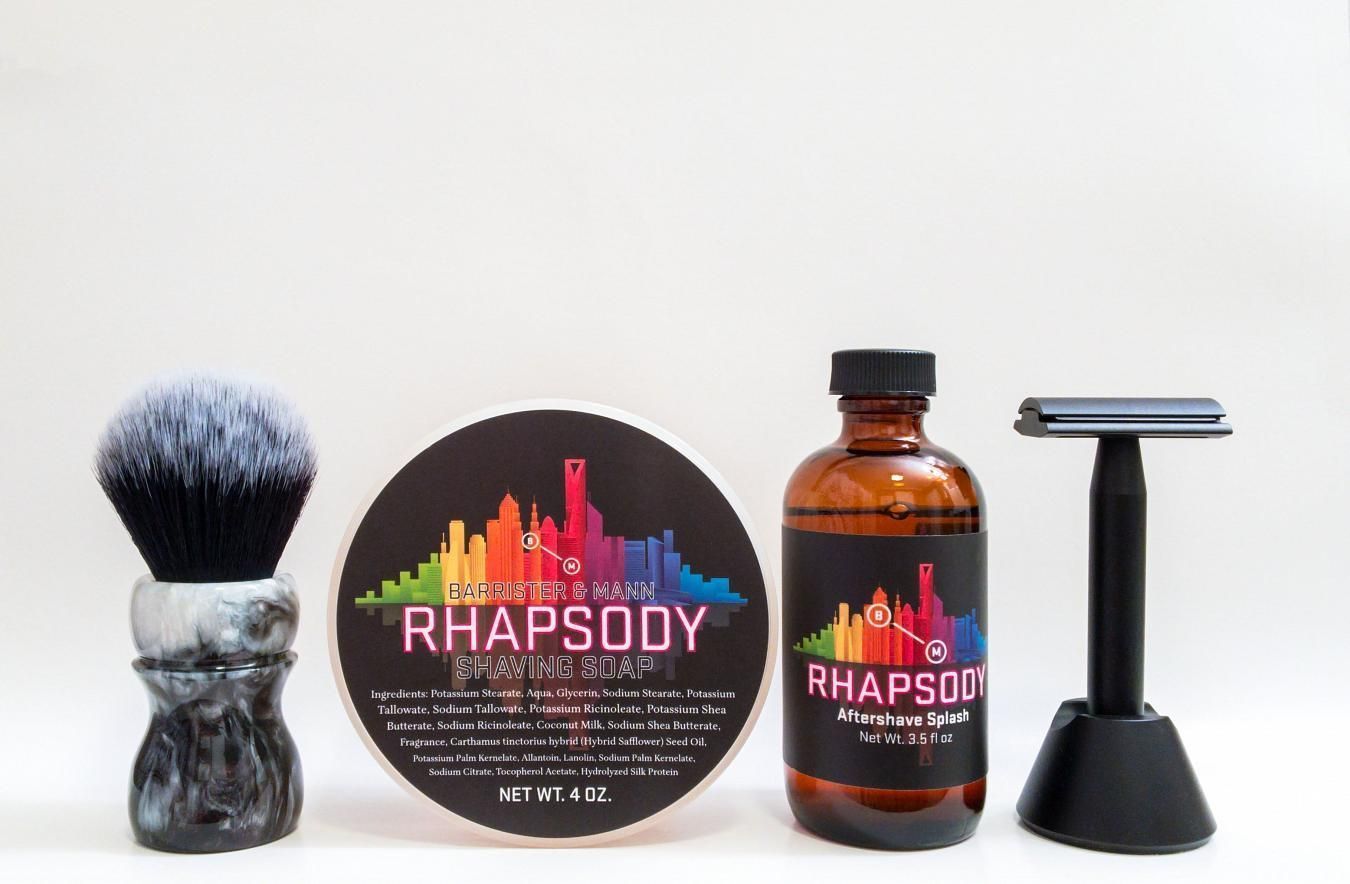 Fighting supernatural forces and finally posting a review of Barrister and Mann Rhapsody #soap and #aftershave - ironic now that it's (unfortunately) discontinued.

In the mid-1980s, the House of Nicolaï released a beautiful, stately fragrance for men under the name "New York." Bright and citrusy, but with distinct floral and spicy elements, it soon became a favorite among men of wealth, power, and prestige. Patricia de Nicolaï herself, catapulted by the success of this and many other masterpieces bearing her signature, eventually became director of the Osmotheque, the world's scent archive. In the wake of her meteoric rise and continually prolific work for her House, many of her earlier creations, including New York, have been largely forgotten in favor of newer, shinier aquatics and dry, earthy vetiver/citrus creations.

But not everyone has forgotten them.

In the spirit of the title "New York," we decided to incorporate the scent of pear blossoms, which bloom in Central Park in the springtime and have a famously pungent odor, into a citrus/floral/spice structure to symbolize the beauty of Spring (when the snow finally melts). Because using only our pear blossom accord made the fragrance rather heavy, we decided to lighten it with the scents of apple and cherry blossoms, incorporating all three accords into a base of lemon, orange, orange flower, rose, bay, thyme, sandalwood, patchouli, musk, lavender, and vanilla. The result was a clean, sweet, citrusy scent with a distinctly floral cast and a richly smooth base, perfect for still-chilly Spring mornings where it's hard to justify getting out of bed. Bright and uplifting, Rhapsody is sure to leave you feeling refreshed and ready to face the day.

I've done a lot of reviews of #BarristerMann goodies over their history - in fact, almost every product they've released! Click on the hashtag to browse them all, or check out the History of Barrister and Mann for a more targeted approach. Regular readers should be well aware of the performance of both soap and aftershave, especially the former in the older formula, which is essentially "black label" (pre-Glissant). I have a backup soap in Glissant that I'm holding onto for the shavepocalypse. The latter was originally going to be released on March 20 but was delayed to April 1, 2017 due to bad weather. It was the last ever production, being replaced this year by Jacinthe instead.

A brief note about this review... As I alluded to in the lead paragraph, this is an attempt to rectify an almost supernatural set of circumstances that have prevented me from doing so for years now... I acquired my Rhapsody set on March 20, 2016 - almost two years ago! I've shaved with it countless times; I even have the SOTD pictures (in a massive folder of them) to prove it - and note the level of the aftershave. For one reason or another though, I've never gotten to post them. That all changes today.

As you can see from the description by #BarristerMann, the scent is based on a fragrance called New York crafted by House of Nicolaï in the mid-80s. It is actually a rather complex accord, consisting of notes of pear, apple and cherry blossoms, lemon, orange, orange flower, rose, bay, thyme, sandalwood, patchouli, musk, lavender, and vanilla. Older tubs of the pre-Glissant soap and aftershaves don't show any notes at all, as can be seen in the photo above. The newer versions show a much-abbreviated list of "blossoms/citrus/herbs." Clearly, neither do this scent justice - though one could argue that listing all the notes would be silly due to the sheer number of them.

On open you get the three blossoms first and foremost, counterbalanced by the citrus; including lemon, orange and orange flower (neroli). It's somewhat sweet, but not sickly or cloying. You can thank the apple and cherry blossoms to tone down the pear blossoms and the citrus takes it a bit further adding just a touch of bitter tartness. Naturally, the citrus is rather volatile and fades away quickly - and there's some rose that comes through shortly after application, but it too is light and fleeting. Towards the middle and base is where the bay and thyme come alive and the rose makes way for the lavender. On the base you're settled into a nice, manly accord of sandalwood, earthy patchouli and musk that's warmed up gracefully with vanilla... While the floral aspect never truly goes away, it does fade gently. Like many of the more complex Barrister and Mann scents, Rhapsody is an olfactory journey. The smell of the blossoms on the trees at the start, later grounded by the warm, earthy and woodsy base. This is a beautiful fragrance and I seriously mourn its passing.

Scent strength of the soap is a healthy medium, but the aftershave takes it just a bit further; practically strong. Longevity is excellent at 6+ hours with a medium sillage for most of it. I could catch whiffs of it for hours after application.

Coincidentally, check out my review of Jacinthe yesterday, where I compare some other scents that fall under a "springtime genre" from Barrister and Mann. Rhapsody is not too unlike Jacinthe, 42 and Adagio. Although I didn't compare Rhapsody specifically yesterday... It's easily the most complex and longest lasting of the bunch.

Performance of both the soap and aftershave I won't get into, really. The "black label" soaps perform nearly as well as the later Glissant formulation, though not quite as slick, which is the biggest improvement. Lather density and cushion are about equal, as is face feel; perhaps only slightly improved in the latter. The aftershave is and has been the Tonique formula, which everyone knows at this point and is well understood.

Hardware for today consisted again of the black #StandardRazors in aluminum, with a #Gillette 7 O'clock (black) blade on shave two. The brush is a #LowbornSupply featuring a 24mm Tuxedo knot. The black and white scheme matches the razor and software despite the lack of color, and the Rhapsody artwork literally features a rainbow of them. The #GTP scuttle, naturally, came along for the ride.

Another lovely shave today and I got to use a favorite set of software... More importantly, I finally broke the curse and got a review of it posted! Amazing. Like I said, it's a real shame that Rhapsody is no more. This is a beautiful fragrance. Perhaps it didn't sell as well as expected after a couple of years as a springtime release... But I suspect there are a lot of fans out there still. Let's hope that Barrister and Mann reconsiders, or at least issues a special edition re-release some day! I may literally cry when this one's gone.