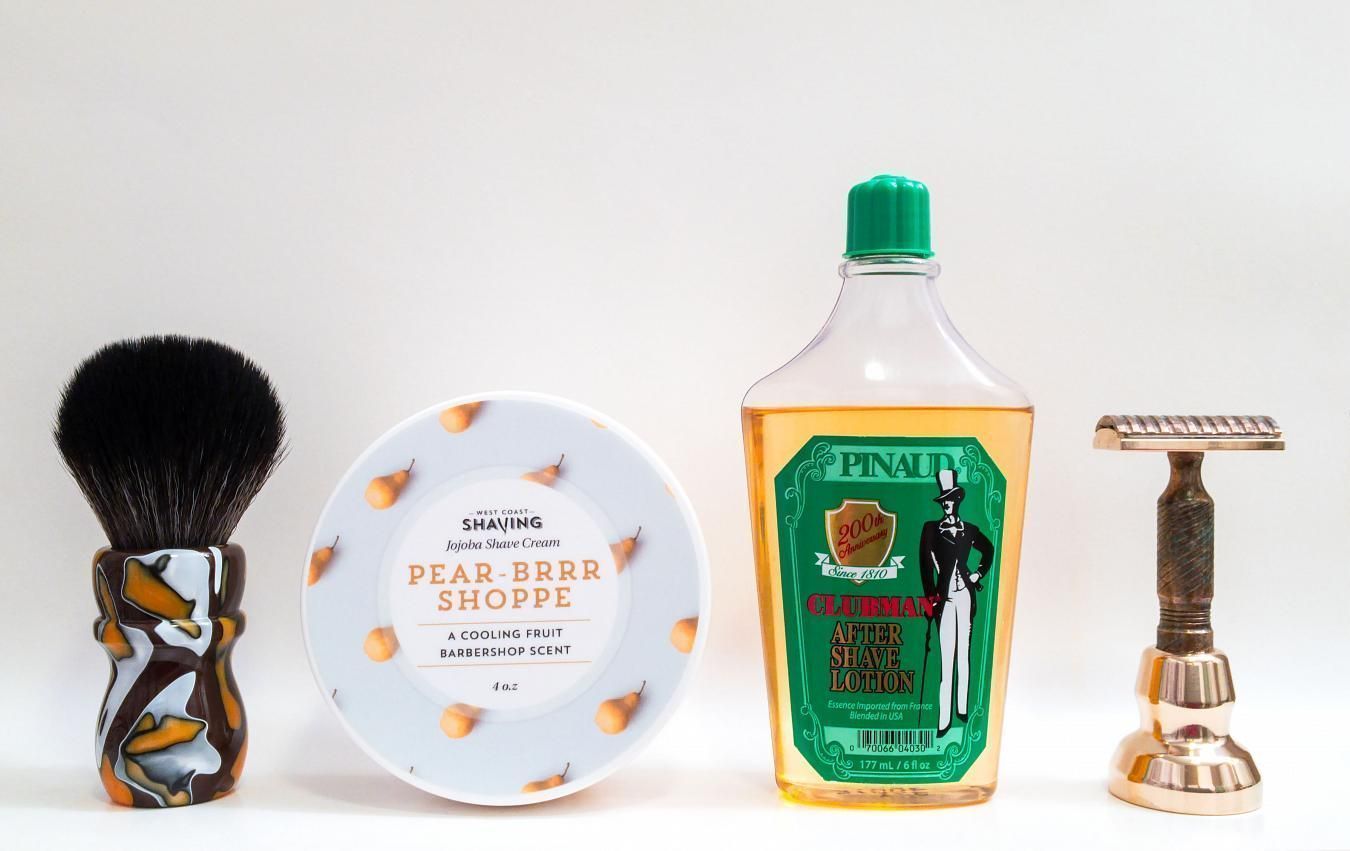 Our last scent is a unique fruity twist on barbershop, with a menthol kiss. You might want to kick off your lazy summer morning with our Pear-brrr Shoppe fragrance.

A brief note on the chart above; Post-shave and Scent do not reflect today's offering, rather Pinaud Clubman.

I'm one of the lucky 20 people selected to give the upcoming house-brand releases from West Coast Shaving a go before launch on August 20, 2018. This is the first of such reviews, and is the Pear-brrr Shoppe scent (one of five) in a cream, made by Chris Cullens of Catie's Bubbles. A soap will also be available, made by Vida Perez of Oleo Soapworks. Finally, there will also be a matching aftershave. At launch, the 4oz. cream will be $15.18, the 5oz. soap will be $17.98 and the aftershave for $15.18. Post-launch, the regular prices will be $18.98, $21.98 and $18.98 respectively). Check out West Coast Shaving Introducing New Shaving Soaps Line for the full scoop.

One of the biggest differentiators with these new shaving creams from West Coast Shaving and Catie's Bubbles are the scents. Whereas most of the creams out there are rather simple (e.g. lavender, rose, lime, etc.) these will be artisan-based, complex and part of a set. Not so much today's offering, but the other four (Fougére, Cologne, Chypre and Oriental) fall equidistantly around the fragrance wheel (yes, it's much like a color wheel). In the case of Pear-brrr Shoppe you get a pear forward scent with a subtle "barbershop scent" undertone.

Pear-brrr Shoppe has notes of pear, geranium, oakmoss, coumarin, vetiver, vanilla, nutmeg, and mint. The opening notes of sweet fruit give way to a more traditional blend of geranium and oakmoss, which may evoke a "barbershop scent" with which many are familiar. Along with a hint of spice and just for fun, there's a light menthol kicker (on par with say, Proraso or a bit more) - thus the "brrr" in the name. It smells awesome.

The packaging is fairly average; not a Parkway tub which is more robust and flush on the sides; this one has a larger diameter top than the bottom; not unlike earlier L&L Grooming or the new Mickey Lee Soapworks King style tubs. There are labels on top and on the side; the latter a tight fit vertically. They seem robust enough and waterproof. The branding is clear and professional, and the artwork simple - but excellent.

Performance of the cream belies its surprisingly simple ingredients which to be fair, are similar to most of the popular shaving creams on the market (more below). In the tub, it looks like pretty much any other hot process soap. Touching it though, and you're instantly reminded that this is a cream... Albeit probably the softest soap (croap) ever. Point being, it's not actually a "cream" in the strict sense.

Ideally, it's best lathered by applying it by hand to your face and neck and using a slightly damp brush, begin to work it into a lather - applying a bit more water to the brush tips as-needed. Me, being stubborn of course, made the lather in my #GTP scuttle as always - after lightly loading straight from the tub (I'm used to early Dr. Jon's which was also very, very soft). Before long, the scuttle was nicely filled with a (surprisingly) creamy lather with very good primary and secondary lubricity and decent face feel post-shave. It bears emphasizing; the lather was really creamy and thick with a nice gloss. Impressive!

More on the ingredients. If you distill the ingredients of the "Three T's of England" (Geo F. Trumper, Taylor of Old Bond Street, Truefitt & Hill) along with D.R. Harris and even Proraso or Speick down, you have essentially the same basic ingredients across the board... So very comparable, all. If you've tried one you know what to expect from the others, more or less. What differentiates this offering is that this cream additionally contains jojoba oil which is nice for your skin and resulting feel; always a plus and noticeable. The ingredients, then, are:

Cella is also similar, but contains tallow (so, non-vegan) and swaps the glycerin for almond oil. Derby is perhaps the most healing of creams, adding allantoin and panthenol and even a little PG (propylene glycol) for slip - which all of the others lack. Overall, my favorite creams though, and those I generally find best - are the Portuguese creams such as Musgo Real. Besides the jojoba oil, they also contain lanolin and witch hazel leaf extract both for skin feel and healing. But you're also paying a little more - for a little less. The only shaving creams better and quite likely the best out there are, surprisingly not Baume.be or XPEC (which are overrated in my opinion - but Meißner Tremonia and Institut Karite none of which are particularly cheap. Check out the #Cream and #CreamWeek hashtags for some additional insights and comparisons.

I had no matching aftershave on-hand (one will be available at launch for $15.18; thereafter at $18.98). So I had a choice... Go with pear, or go with a general barbershop scent. While there's practically a million of the latter, the former is decidedly harder to match. In recent products there's only Barrister and Mann with either Rhapsody (technically pear blossom) or Jacinthe. I took the easy route and just went for Pinaud Clubman and called it a day. Truth be told, as far as healing and moisture, it flat out sucks. It's the scent we all want with the bonus of being dirt cheap and available literally everywhere. Compare the following ingredients; they're basically the same except the "newer" one is broken down more (mainly the scent) due to recent regulations in the EU and elsewhere:

Hardware for today consisted of the #TimelessRazor #TRBR38 razor in bronze with a #PolSilver on shave three. The brush hails from #WildWestBrushworks and called Anthem Eagle which sports a 24mm Tuxedo knot. The aforementioned Georgetown Pottery G12 scuttle did the deed.

My hat's off to #WCShaving and #CatiesBubbles on this collaboration cream. The price point will be $18.98 (on sale at launch for $15.18) for 4oz. The presentation, performance and scent are all fairly excellent. It's not the best, but it's not too far off - and certainly better than (the large) average. It beats the "Three T's of England" and even a good number of other popular shaving creams. What truly stands out (besides the artisan scent) is the lather quality and slickness. I'd definitely suggest giving these new shaving creams a go!

If you're not into shaving creams and prefer a shaving soap instead, there will be a matching one made by Oleo Soapworks at $21.98 (on sale at launch for $17.98) for 5oz. with all the goodness of her duck fat base.