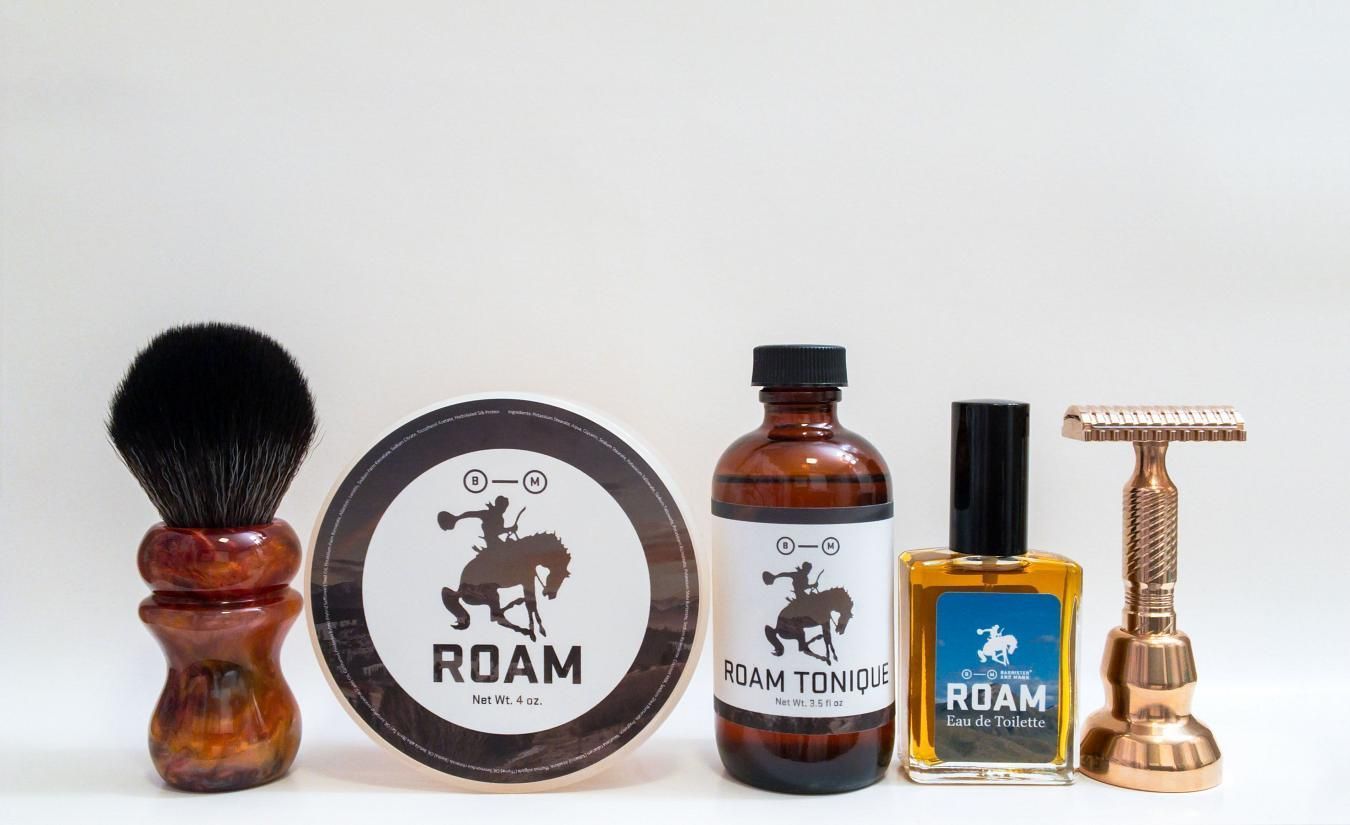 Reveling in the damp, leathery smokiness that is Barrister and Mann Roam in a #soap and #aftershave combo, now with a matching #EdT - and celebrating its fifth anniversary in this Special Edition release!

Inspired by the rugged individualism of American cattle ranchers, we blended the aromas of real pipe tobacco absolute, smoke, leather, herbs, damp earth, and grass into a bright, robust scent reminiscent of life on the open range. Timeless and virile, Roam harkens back to the days of the Old West.

I'll preface this by saying that I've reviewed Roam before but not to the extent today, with the flashy new looks. I've also done a lot of reviews of #BarristerMann goodies over their history - in fact, almost every product they've released! Click on the hashtag to browse them all, or check out the History of Barrister and Mann for a more targeted approach. Regular readers should be well aware of the performance of both soap and aftershave, the former being in the Glissant and the latter in Tonique. Roam first made it's debut back in September of 2013. The last was a limited re-release on February 29 - March 7, 2016 (interestingly also featuring a Kyovu aftershave version) and when I got mine. This year, it celebrates its fifth anniversary (thus the Special Edition release as it's also technically discontinued) as well as that of Barrister and Mann! It was part of the March 1, 2018 releases along with Jacinthe.

Roam is one of those classic, "polarizing" scents from Barrister and Mann. The opinions of it run the gamut from "WTF?" to "awesome!" I'm firmly in the latter camp, as I find the scent to be unique - or at least, was more unique when it debuted. Now, several artisans have a "smoke forward" or a "cowboy" scent. For example, Barrister and Mann Nocturne, Mickey Lee Soapworks Unforgiven, Declaration Grooming Darkfall, and Tallow + Steel Morocco and Shag. And these are just the smoky ones; there are a lot more that emphasize leather as well (as Roam does). Other than Tallow + Steel Morocco I don't think anyone does smoke like Roam does save for Stirling Soap Co. Texas on Fire.

So yeah, let's go beyond the smoke. Roam officially has notes of real pipe tobacco absolute, smoke, leather, herbs, damp earth and grass. While the most prominent note is smoke, the leather tempers it and fades back and forth from foreground to background a bit. The base is decidedly more earthy and grassy. Supporting those notes in the middle and rounding things out are the herbs and tobacco. The best way to describe the scent is like waking up in the morning, wrapped in your leather jacket next to a smoldering, slightly damp campire. It is not for the faint of heart. Embrace it, love it - own it.

What's new for this fifth anniversary Special Edition besides the colored artwork (no what's seen above on the soap and aftershave, rather the EdT) is that last bit... The Eau de Toilette! For the real Roam men out there, now you can extend the scent for real. All the heady goodness of the other software but strong sillage (initially) fading to a robust medium with a longevity of 8-10+ hours (which is reflected in the chart above). This is the missing piece for the real fans.

Hardware for today's ritual included the #TimelessRazor #TRBR78 bronze open comb razor with an #Astra blade on shave four. I generally shave with a blade five times in most razors, yet in more aggressive ones like the Mühle R41 I only do two, as I find fresher blades work better in it. This razor seems to strike a balance between the two. Worth pointing out that Astra blades are more mellow to begin with, so that might explain it as well. In any event, the shave was not quite as smooth as the last, but just as efficient by the time the lather settled. This thing is a wicked (awesome) beast. The #WildWestBrushworks brush sporting a 24mm BOSS knot did wonders for the lather, mixing it up in the #GTP scuttle, which also served to keep the lather nice and warm.

There you have it - Motherfuckin' Roam as it's known in some circles - complete with an EdT! Life is good. If you're a fan, you should scoop up some of this juice. Who knows if we'll ever see it again. Great shave today!