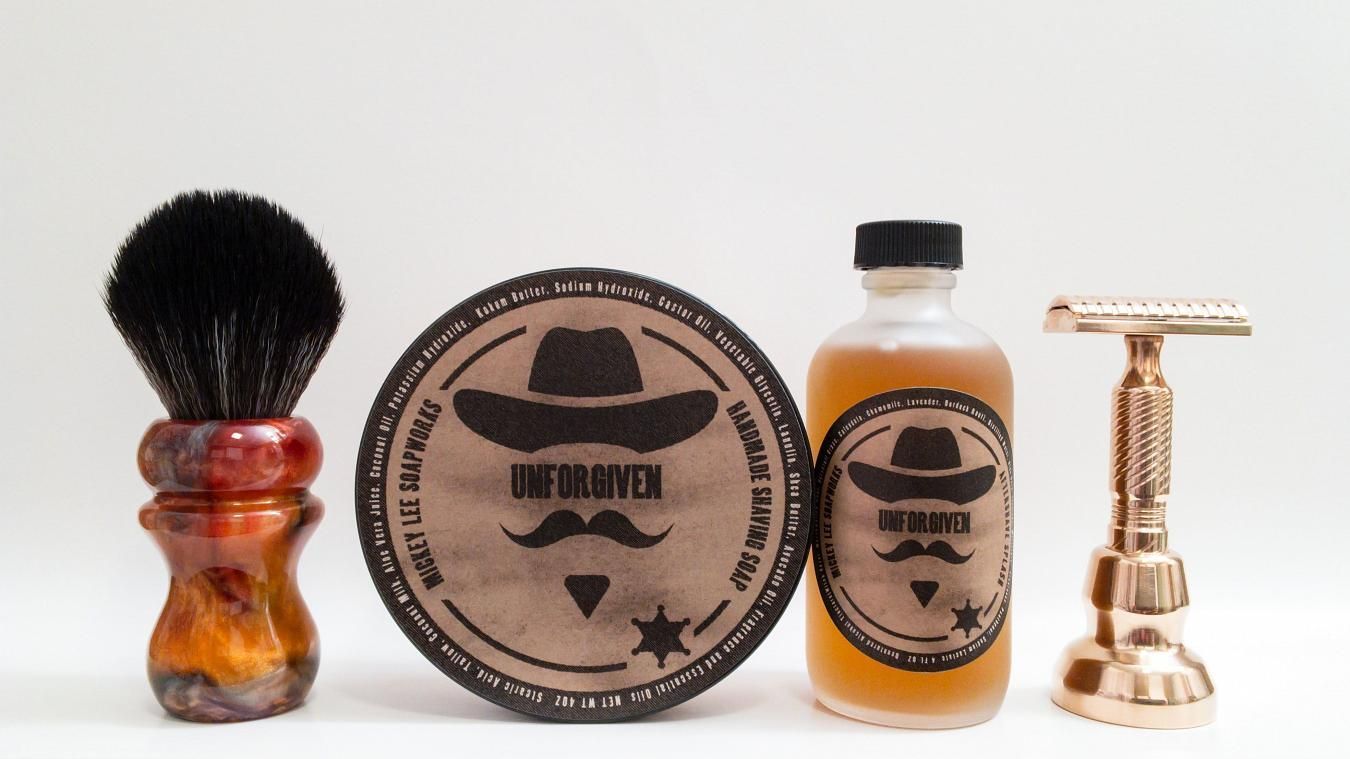 Long days and pleasant nights!* Saddle up and rustle up some fillies on the range with Mickey Lee Soapworks Unforgiven #soap and #aftershave!

This smokey, woody fragrance we created is like something that could’ve walked right out of a gun fight in the Old West. Might be one of our “manliest” scents to date. Dirty enough for a man, but still smooth enough for a lady.

I've no shortage of #mickeyleesoaps reviews here on the site, certainly. If you click on that hashtag (or any here, on the site) you can browse a timeline of past reviews... Or check out the incredibly powerful search feature to really drill down on what you're looking for. So I won't add anything today regarding performance, packaging, etc. Let's just talk about the scent here, and an update on the #TimelessRazor TRBR38 bronze razor.

NOTE: You may recognize the opening quote in the lead paragraph. If not, it's by Roland Deschain, the gunslinger in Stephen King's Dark Tower series. I just recently (re)read all eight (plus) books. It's an epic tale set in a cross between the wild west, sci-fi and fantasy/horror and the author's magnum opus. If you haven't read it, I'd very highly recommend it. You'd also be surprised how very many of his other works tie into it. Anyway, it left an impression on me - and I've already long romanticized the wild west. So today's shave is apropos and poignant.

For this year's release of Unforgiven on October 18, 2017 it has been given new artwork. Much cleaner and professional looking than before, though the prior version had its share of fans. The background resembles brown denim and the silhouetted, stylized face of a wild west lawman rocking a larger than life mustache and goatee complete the scene. Well done! Both are currently sold out. As for the scent, Unforgiven officially has notes of rosewood, birch tar, amber, patchouli, sandalwood and caramel.

When I first tried it, the smokiness of the birch tar seemed to be MIA, but after a proper shave it appeared from over yon dusty ridge. The soap is smokier than the aftershave and is the prominent top note of both. It quickly settles down into a woodsy amber accord. It reminds me of a nice, old school men's fragrance (without the omnipresent 70s musk factor). It remained slightly sweet throughout the middle and base thanks to the caramel - as did the patchouli lurking just beneath the surface, adding just a hint of earthiness. I really like this scent. Like many of their scents, longevity was fairly medium at 3-4 hours, tops. I was hoping for more - including scent strength which was a lighter medium.

Comparisons in this crowded "cowboy scent" genre might include L&L Grooming Cuir et Épices or perhaps Barrister and Mann Roam software. Both are billed as "western" smoky scents, and share more than a few similar notes. Namely leather, tobacco flower, cedar, anise, oakmoss, and patchouli for the former and real pipe tobacco absolute, smoke, leather, herbs, damp earth and grass for the latter. Both feature leather and tobacco and green (if not earthy) components. They're more "fully formed" visions of life on the range whereas Unforgiven is a bit less complex. That said, it should appeal to a wider audience than Roam by far, which has often been described as "polarizing." Cuir et Épices is a much more direct comparison in this case, but the anise lends a very slight gourmand vibe and may pique some.

Another comparison might be L&L Grooming Darkfall which sports notes of agarwood, amber, treemoss, benzoin, birch tar, cinnamon and clove. It's also woodsy and smoky, but in a slightly different direction. While it too has a green component, it's a bit warmer and spicier. It too smells like a classy men's fragrance. Out of these four, it's also my favorite.

I suppose you can also lump in Tallow + Steel Morocco though it's not even remotely billed as "western" - it has notes of Atlas cedarwood, oakmoss, cade, cypress and rose. This one is the smokiest by far, even Roam - yet offers a woodsy, green vibe like the others. It's more floral than Cuir et Épices. As a sucker for smoke, this one is a favorite, though again, not quite in the same genre as the others.

If you've been following along since my initial in-depth review of the Timeless Razor TRBR38 bronze razor, you'll know how much I love it. Well, as much as it pains me, the honeymoon with the #TRBR38 might be waning. When I had first used it with a fresh PolSilver blade, it seemed to live up to the expectation of being on par with the .68mm gapped variants in stainless steel and titanium. As the blade racked up shaves though, I noticed that the jawline was left a bit stubbly. Was it the blade - or was it the number of shaves? Or did I just have a lucky first day?

After only four shaves on the PolSilver I decided to try a fresh #Feather blade and see what's up. The theory being that a fresh blade such as this one particularly - should cleave anything in its path. Alas, it wasn't as smooth a shave (but not by much) and worse - left even more stubble behind! A bit perplexing, to say the least. So right now I can say that yes, the blade makes a difference even in this mild razor, and having a new one doesn't necessarily mean closer. I'll try again tomorrow, and on Friday I'll try shimming the razor as I've done with my Feather AS-D2 to boost its efficiency a notch.

The #WildWestBrushworks brush with a 24mm BOSS knot is just lovely, with its fall colors matching the increasingly patinated razor (frankly I'm a little surprised it's progressing within a week of shaves; this is exciting!). Not to mention, the brand name can't possibly fit better with today's shave, no? But I digress. The #GTP scuttle did its usual business in keeping the lather contained and warm.

A nice shave with another Mickey Lee Soapworks combo, but that should come as no surprise. Very good software at reasonable prices and of course, unique and enjoyable scents. Unforgiven didn't quite live up to my expectations, but was by no means disappointing either... I love the scent and I had hoped it'd be a bit stronger and longer lasting. But that can be said for a great many bit o' software out there.