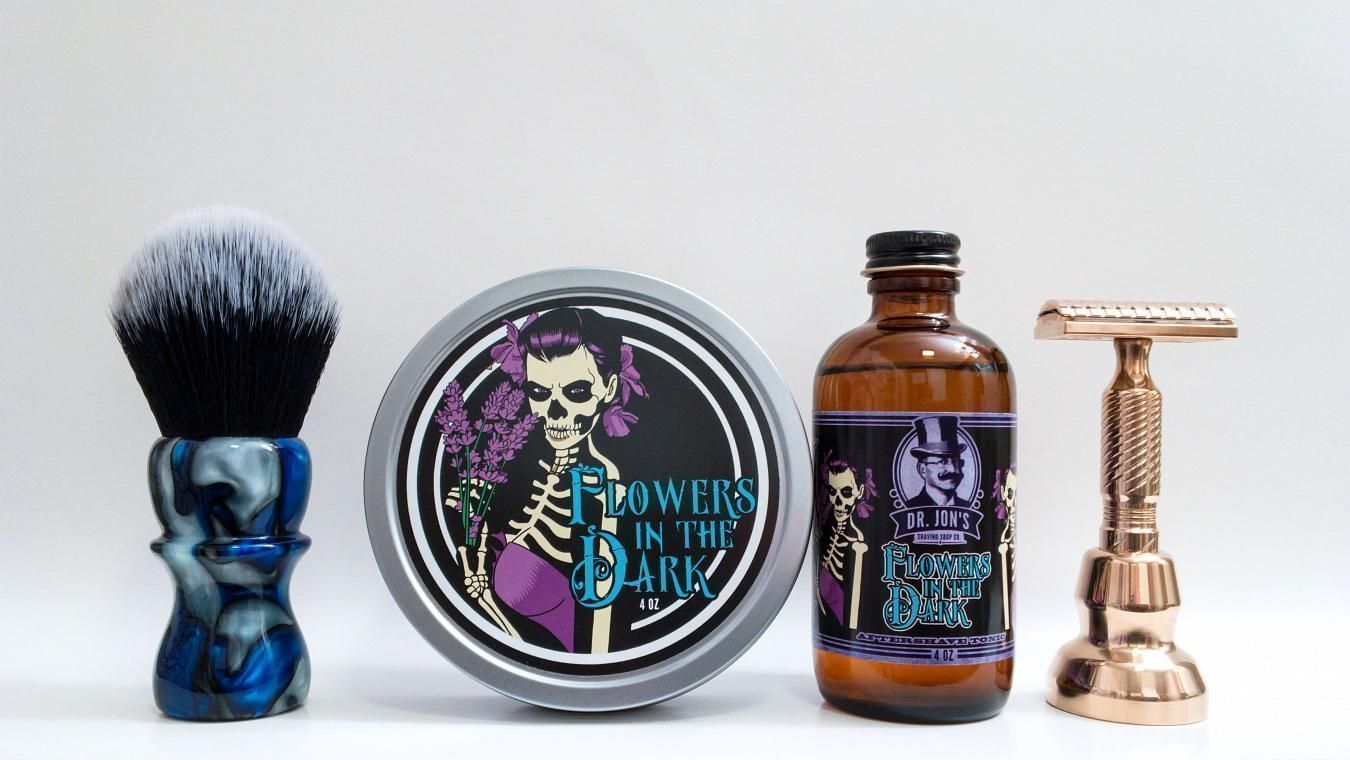 Dr. Jon's "Flowers in the Dark"

It's FriYAY! Also the start of Halloween weekend, and what better than Dr. Jon's Shaving Soap Co. Flowers in the Dark #soap and #aftershave to set it off?

The scent of lavender with a soothing undertone that is somehow familiar yet unnatural. After the lavender fades all that remains is something resembling coffin wood and ozone, a disturbingly pleasant combination.

I've been a fan of Dr. Jon's Shaving Soap Co. for years now, and that was with the first iteration of software. In fact, they made my Top Five Artisans of 2015 list. I did a beta test/review of Aphrodite back in the day and it was very promising - as this was what would eventually become Volume 2 of the soap formula. Back then, I considered #DrJonsSoapCo to have the slickest soap I had ever used... I'm happy to report that that still holds true today. The soap was extremely slick, both in primary and residual - in fact, I could make practically as many additional strokes as I wanted during a pass (I tested this). Yet, it rinsed off quickly and cleanly afterwards. The lather, easily produced, was abundant, thick and creamy. The scent itself is an intoxicating wood and lavender. Check out my in-depth review of Flowers in the Dark for the full skinny.

I wanted to talk about the #TimelessRazor #TRBR38 bronze razor some more. As you're probably aware, I've been experimenting with it for just over a week now since my initial, in-depth review and especially lately - as I've discovered it's milder than it first seemed... Quite possibly a showstopper. Others have noticed this as well, and even returned theirs... I don't give up so easily. I switched over to a #Feather blade over a PolSilver (and a bit early) to try and improve the experience; it's on shave three today. What's new today is that I added a shim, and the TL;DR is that it didn't work... But I discovered why.

The beauty of the Timeless Razor(s) are that they clamp down on the blade over a large area - and pretty far out, close to the blade's edges (this holds the blades nice and rigid, preventing any chatter). My shim, which works on other razors that don't do this... Just won't work in these; it's too narrow. The trick is to cut a blade down as little as possible; so as to stay out of the way, but be fully engaged when the razor head (cap/base) are tightened up. Basically trimming off about twice (or thrice) the width of the edge's bevel worth on both sides and no more. Mine currently goes back to the side notches behind the edge; too far. You can see this in the first photo above (look at the large version by clicking on it). Sorry for the lousy quality of those; I was in a rush this morning.

Maybe I'll cut a new blade shim that's a bit wider; as wide as it can be. This way when everything's tightened down, the shim will actually be effective - unlike today's experiment. I fear all that I accomplished with my existing shim is to create blade chatter with only a hint (if that) of increased blade gap. It did seem ever so slightly closer, so that's a positive at least (despite inducing a couple of nicks, which is new).

I think I'm wandering down a needless rabbit hole though because this razor started off great and I had several nice shaves after that. I have one other possible theory; two actually. That a Feather blade in this razor doesn't work for me - it wouldn't be the first time this has happened. Second, that possibly enough wax from two blades has deposited inside and affected things, however slightly. So next week after my face has calmed down over the weekend, I'm going to try again with a fresh PolSilver blade... Spending a little time first to ensure that the insides are spotless, to rule that theory out.

I really want to like this razor. The patina is really starting to kick in now and it looks fabulous. Remaining hardware for today included the ever lovely, custom #WildWestBrushworks brush with a 26mm Tuxedo knot which handled the loading and lathering in the #GTP scuttle.

Stay tuned for more exiting details in... The Blade Gap Widens! Coming soon to a browser near you. All levity aside, if this doesn't work, my time with the TRBR38 may be at an end until Timeless Razor releases additional base plates with more aggressive blade gaps (along with top caps and handles, I'm also told). Of course, the timeframe for these new additions is currently unknown... Could be soon - could be next year. The razor has sold well, however - and returns because of the mildness issue have been somewhat limited. So definitely expect more options down the line!