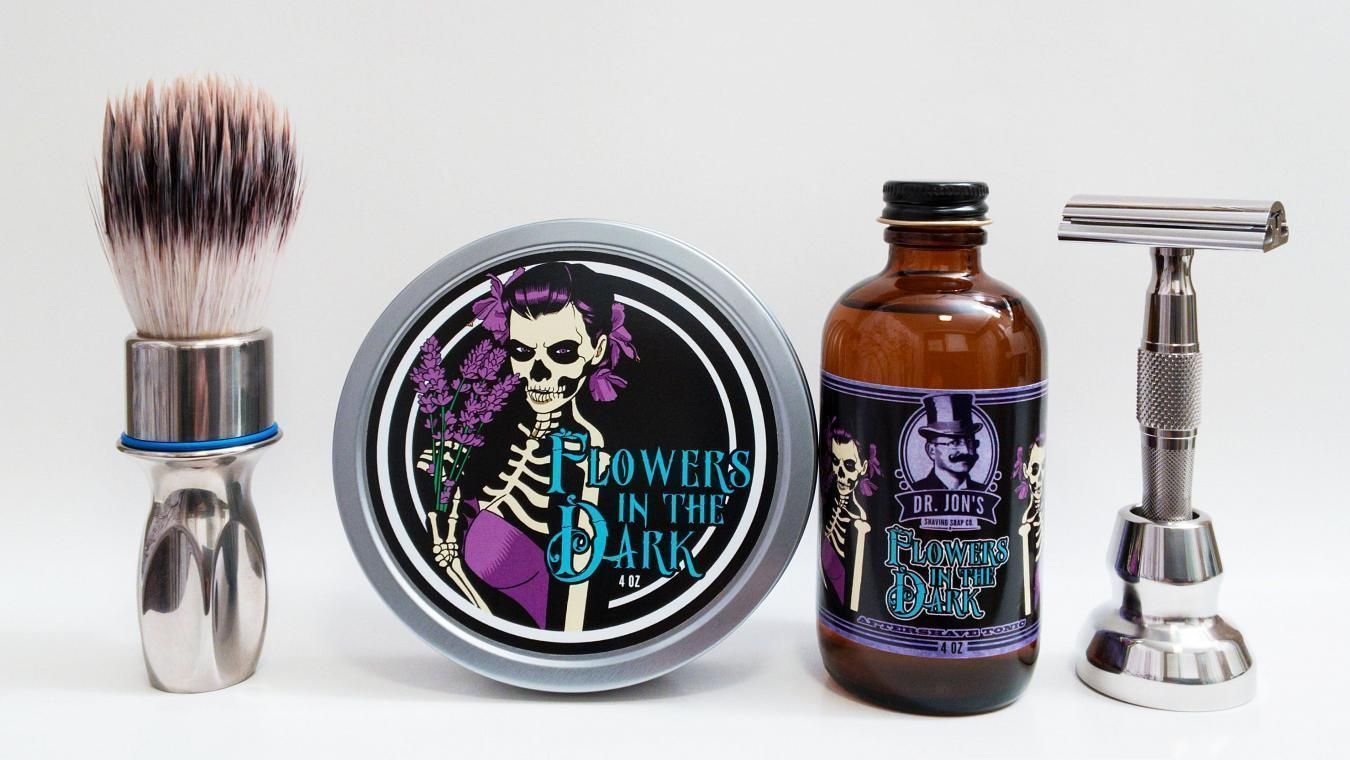 Dr. Jon's "Flowers in the Dark"

Crack open the coffin lid and inhale deeply the exquisite bouquet of lavender that lies with the corpse! Dr. Jon's Shaving Soap Co. Flowers in the Dark #soap and #aftershave is scary good, and will give you chills.

The scent of lavender with a soothing undertone that is somehow familiar yet unnatural. After the lavender fades all that remains is something resembling coffin wood and ozone, a disturbingly pleasant combination.

I've been a fan of Dr. Jon's Shaving Soap Co. for years now, and that was with the first iteration of software. In fact, they made my Top Five Artisans of 2015 list. I did a beta test/review of Aphrodite back in the day and it was very promising - as this was what would eventually become Vol. 2 of the soap formula. Back then, I considered #DrJonsSoapCo to have the slickest soap I had ever used... I'm happy to report that that still holds true today. The soap was extremely slick, both in primary and residual - in fact, I could make practically as many additional strokes as I wanted during a pass (I tested this). Yet, it rinsed off quickly and cleanly afterwards. The lather, easily produced, was abundant, thick and creamy.

Overall, everything about it is better and holds its own among the best. Granted, it's a vegan soap. That may turn off many dyed in the wool tallow fans, but it shouldn't. With skin-feeding goodies including shea butter, mango butter, meadowfoam oil, castor oil, avocado oil and golden jojoba oil, it's way plush. I didn't feel like I was missing anything (e.g. tallow) in use. The resulting face feel was excellent; soft, smooth and moisturized.

If you've used the old version, or at least were "on the scene" back in those days, none of this should come as a surprise. However, one issue that always seem to rear its head was that many considered the soap "too soft" (or at least, had a strange consistency) that made lathering difficult. Of course, this could be gotten around by using a slightly wetter than usual, soft brush and/or light touch. But many couldn't be sussed. This is one of the biggest improvements in the new formula; while it's still soft(ish) - it's much firmer than the old. In fact, its consistency is that of many artisan's offerings today. If I make may a pun... This was the last nail in the coffin.

The aftershave is a rather simple formula of alcohol, witch hazel, rose water, fragrance, aloe, menthol and alum. While I'm not a fan of alum in my aftershave these days (looking at you, PAA) it's just a hint here, and adds - rather than subtracts from the experience. The healing properties are pretty good, as is the moisturization and general face feel. While the components aren't stand-out, it feels fantastic overall.

The packaging, which includes the all too familiar tin for the soap and amber glass bottle for the aftershave, is nice and classic of the brand. Neither look or feel cheap. That said, I think it's a bit dated, at least when compared to what the top tier artisans are offering these days. From a software quality standpoint, Dr. Jon's Shaving Soap Co. easily qualifies. I'd like to see an upgrade of both at some point, but that's a minor niggle. What matters is the performance and cost and both add up to great value here. Worth pointing out that there's plenty of extra room in the soap tin to load your brush without making a mess, unlike some other products out there. Either way, the artwork is the real winner here. It looks fantastic (as it always has; it's among the best in the business). Totally my speed, too.

So let's talk about the scent. Wow. On the surface, there are only three notes indicated; lavender, (coffin) wood and ozone. But there's definitely more going on... Jon didn't want to elaborate, just that everybody does a lavender so it needed to be something unique and special. I'd say it's an unqualified success. The lavender note is just outstanding - and does not fade like many (if not most) lavender scents do. Rather, it stays ever-present, perhaps shifting only slightly to the background as the wood takes over. There's definitely a cedar vibe to it, but again, there's definitely more going on here. Finally, there's the ozone. You may be reminded of the fresh smell that can be created after the discharge of lightning produces ozone during a storm. The ozonic note is a bit sharp, blending well with the wood and gives the overall accord a clean, fresh component. Scent strength in both the soap and aftershave is robust, with longevity of 6+ hours. In fact, I got hints beyond that.

Hardware consisted of the #TimelessRazor in a .68 gap, smooth solid bar and top cap configuration with a fresh #PolSilver blade and titanium #Stork EX3 handle. The measurements of the latter are 13x95mm with a weight of about 41.5g... I find the length most suited to my style, as opposed to the longer 100mm handles that Timeless Razor offers. Of course, they also offer lengths of 85mm. But made of 304 stainless steel, they weigh twice as much as these titanium handles. A lighter weight is more my style, and works perfectly with the various base plate and top cap configurations. Overall, a more nimble razor in my opinion. The shave was absolutely smooth - and absolutely close. While perhaps a touch shy of a true BBS shave in common trouble spots (i.e. under the chin and along the jaw line) it was effortless, drama free and handily completed in three passes without the need for any extra touch-ups. For a mild razor - it exhibits none of the typical shortcomings of leftover stubble. Nay, this bad boy shaves beautifully close with a smooth feel reminiscent of a Mühle R89 yet with a hair more blade feel and bite to reach those pesky whiskers under the nose.

I'll expand on this razor a lot more in a truly in-depth review, coming soon. I'm just trying various combinations; base caps, top caps, blades, handles... So that I can present an informed piece. I have to say though, so far, every combination leaves me smiling. I can honestly say that I'll probably be using almost nothing but this razor in its two forms going forward. It out-performs all of my mild razors and in fact, rivals my more aggressive ones - without any harshness or irritation. I can't imagine wanting anything more from a razor.

Damn, what a good shave day! The improved performance of Dr. Jon's Shaving Soap Co. soap, along with the fantastic new scent (and artwork!) that is Flowers in the Dark is just a home run. I'm seriously going to need to get the EdT that I held off on. It smells incredible and I want MOAR! The hardware also continues to impress, with just a smooth, close, comfortable shave every single day. It really doesn't get much better than this...