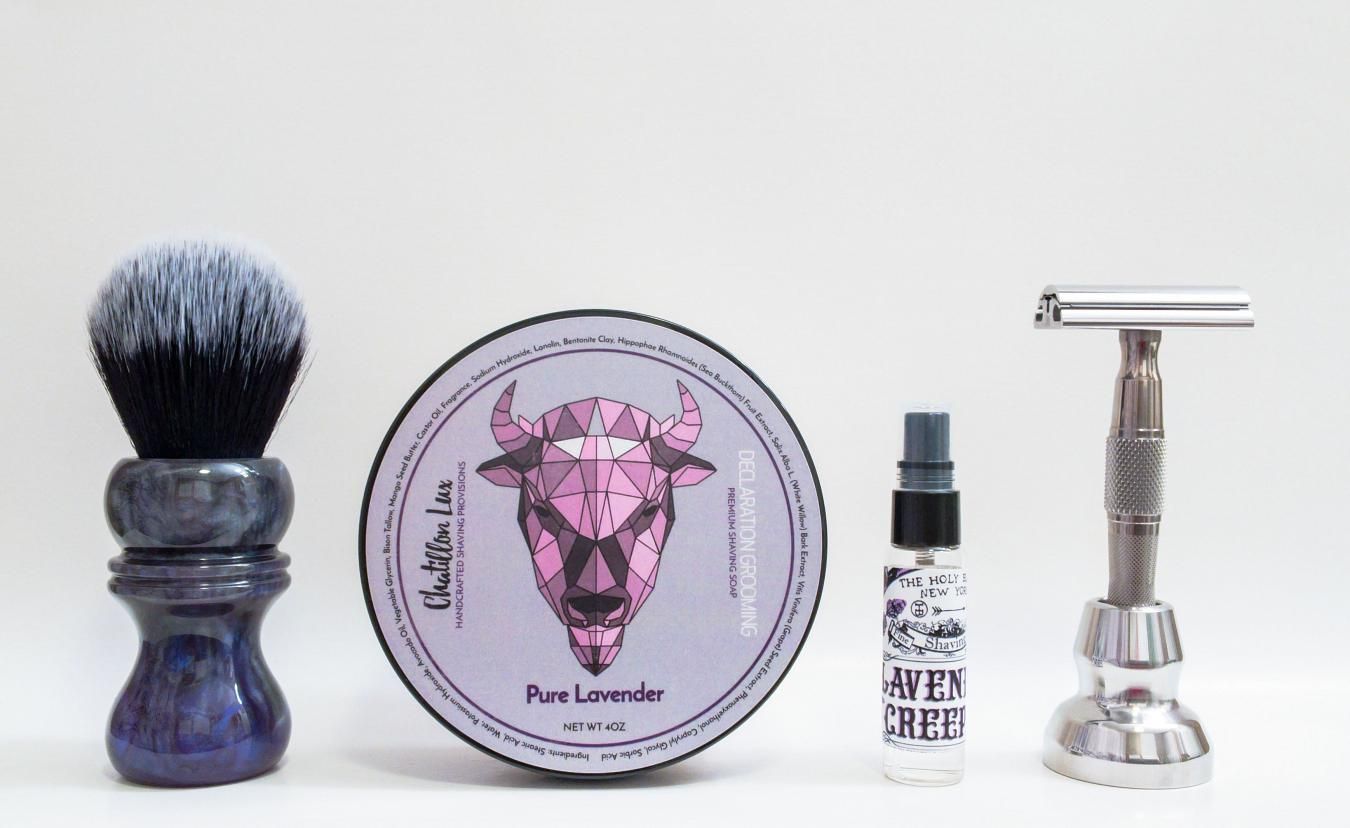 With the countless varieties of lavender, this ubiquitous scent can range from camphorous to sweet and smooth. Chatillon Lux has curated four different strains of lavender, including one grown and harvested locally, to create Pure Lavender. This is a chance to let one of the most popular scents in men’s grooming to take center stage.

I've reviewed a lot of #declarationgrooming (formerly #landlgrooming) here (click on either of those hashtags to see them all) so I won't get into the soap performance here. I've also done an in-depth review of Pure Lavender previously (using all the components) so check that out.

I'm firmly of the opinion that you can never have too much lavender software! So new to the den is a 10ml sample of The Holy Black Trading Company Lavender Creeper aftershave... You may have heard of it (LOL). I actually tested their Menthol X which was the forerunner to Lavender Creeper (which actually had a fougére rather than lavender scent). The reaction is essentially the same as what I wrote then:

After my shave, I liberally applied this concoction to my entire face and neck and was surprised by two things... First, there was no in-your-face menthol blast of vapors! My eyes didn't water, my nose didn't start running. There was hardly any indication of menthol at all, actually... The second thing to surprise me was the icy cold blast that transpired next! That awesome chilly feeling you get that us crazies seek out. The feeling was easily up there with some of the best of them (e.g. Arctique, Vostok, Yeti Snot and so on). Yet it was somehow... Different. I can't quite express exactly how, but it was slightly different than the usual menthol feeling. Granted, a huge part of that was the lack of face contorting vapors in my eyes and nose. But there was more to it. This cold feeling easily lasted at least twice as long as your typical menthol assault, if not three times (easily 15-20m vs. just 5m). It hung around like that obsessed ex-girlfriend. Just when you though it might be gone, nope - still there. After a good fifteen minutes it faded away for the most part, but there was still a bit of a cold tingle...

As mentioned, this is the real deal; a finished product with the signature lavender scent and officially called Lavender Creeper. When they did their most recent release, they had extra juice left over and decided to create 10ml samples, to be included with every order over $10 (using the code "CREEP") until they ran out or 24 hours passed (starting May 14, 2018 @ 4pm):

We had some Lavender Creeper Splash left over when we filled all the bottles, so we put it into some sample vials so that everyone can have a chance to give it a try. All orders placed over $10 in the next 24 hours using the code: CREEP at checkout will receive a free 10ml atomizer bottle of Lavender Creeper splash. We have about 200 of these available, the code will automatically stop working when we run out.

Let's talk about the scent... As you may have guessed, it's lavender. The lavender, the whole lavender and nothing but the lavender. It's a self-distilled French lavender hydrosol, boosted by lavender essential oil. It smells like what you might expect your typical lavender to smell like; no surprises there. But it's a very nice lavender just the same. The scent strength is fairly light, but because there's no menthol in this juice, you can actually smell it! The longevity is about four hours. As an aftershave, it performed okay; barely at or below average on Moisture and Healing (respectively) but the face Feel was quite nice (see chart above). It's your basic alcohol aftershave; the ingredients are:

That last ingredient... Koolada (a.k.a. "W3")... Was developed by Wilkinson Sword for shaving cream - but turned out to be more expensive than plain old menthol. Today you find it mostly in vape juice (E-liquid) for a cooling effect. This is the chilling agent found in Lavender Creeper and the aforementioned Menthol X. This is the raison d'etre and why you should get some.

So what's with the insane resale prices, you might ask - and rightfully so. After all, it seems like fairly average software performance. Two things... The first is the very unique and readily identifiable packaging. If nothing else, #TheHolyBlack does branding and marketing unlike anyone else except for maybe Barrister and Mann and to a lesser degree, Chatillon Lux and Declaration Grooming. What all three of them (and others) are missing are the sense of community building like The Holy Black Brotherhood and the social media engagement. The second is very limited supply. Any time this happens with at least moderate interest in your products, they'll sell out quickly. The Holy Black Trading Company has mastered the trick of artificially limited supply (unlike say, Italian Barber with their 20 razor drops). This happens time and time again with not only Lavender Creeper but also The Tell-tale Heart among others. Though granted, some of that has to do with packaging costs and quantities. What sells to the public for $135 can be found on eBay for up to $325 (the current record). Doesn't mean it'll actually sell for that (indeed, that particular auction was relisted several times)... But people keep trying. These are opportunistic, price gouging assholes (who usually buy just to flip).

Hardware for today was the custom "mild edition" #TimelessRazor with smooth cap and straight bar base plate with a .68 gap and titanium #Stork handle, with a #PolSilver blade on shave six. I normally replace the blade after five shaves, but I forgot to check... And a word of advice; make sure your handles are tightened down before you shave! Half way through, I noticed it got pretty rough (lots of blade feel) and actually saw the head pivoting on my face! Apparently, it had come loose and became the equivalent of the .95 razor with more blade chatter/flex. D'ohhh! The brush of course, had to be the purple one from #WildWestBrushworks sporting a 24mm Tuxedo knot, while the #GTP scuttle brought up the rear.

There you have it. The somewhat average (or rather typical alcohol aftershave and a notch above, say, Fine Accoutrements) that is Lavender Creeper with a killer effect that's still unique in the wet shaving market... Bone chilling, icy face feel - without the crazy menthol vapors making your eyes tear, nose run or masking the scent. Between the packaging and very limited supply, you have a product that's price gouged within an inch of its life in the buy and sell forums and groups. If you do find it at a reasonable price, definitely give it a go! Especially if you're a menth-head (or a fan of lavender) - I'm both.