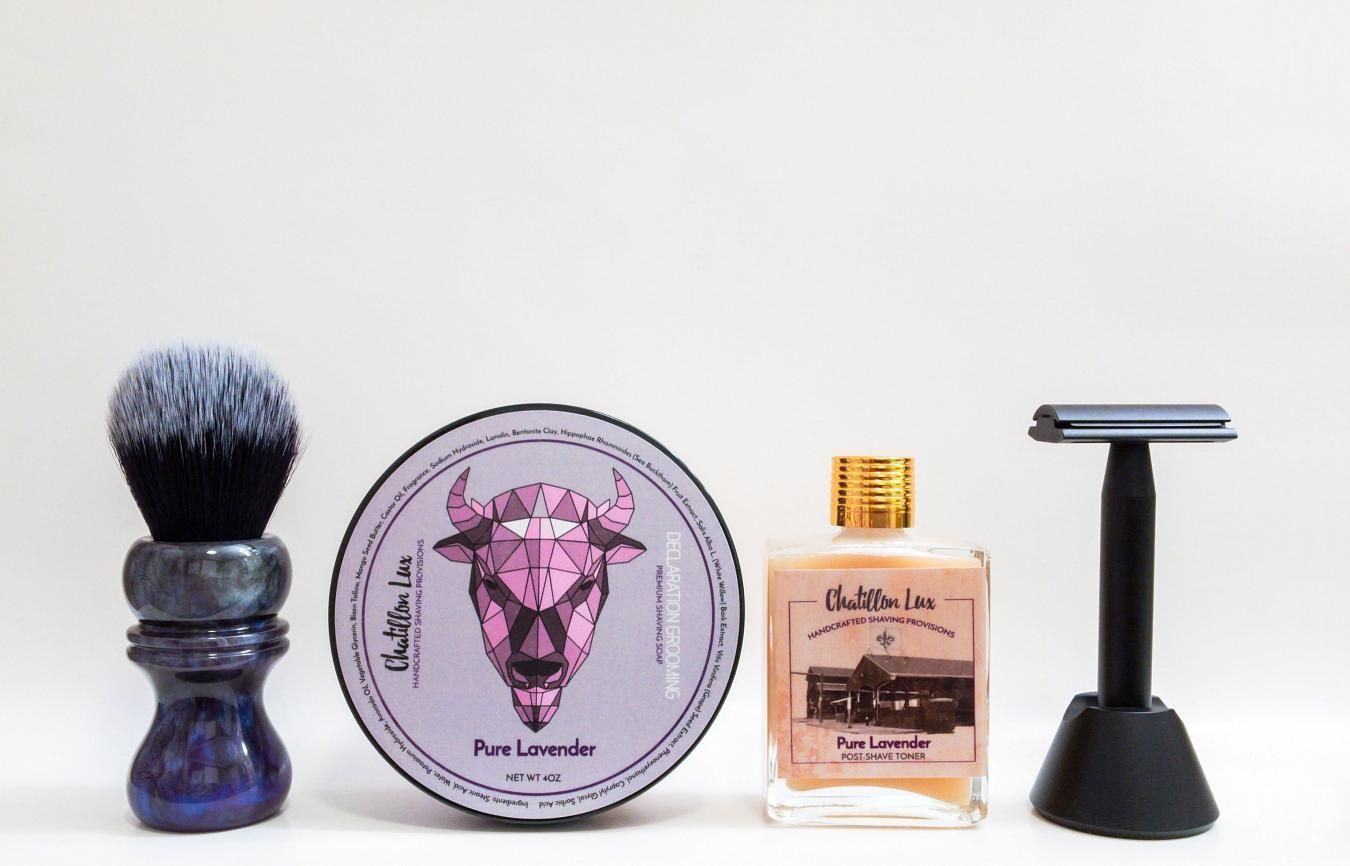 YAC (Yet Another Collaboration) between Chatillon Lux and Declaration Grooming (formerly L&L Grooming) called Pure Lavender in a #soap and #aftershave (toner) combo that kills it!

With the countless varieties of lavender, this ubiquitous scent can range from camphorous to sweet and smooth. Chatillon Lux has curated four different strains of lavender, including one grown and harvested locally, to create Pure Lavender. This is a chance to let one of the most popular scents in men’s grooming to take center stage.

I've reviewed a lot of both #chatillonlux and #declarationgrooming (formerly #landlgrooming) here (click on any of those hashtags to see them all) so I won't get into the soap or aftershave performance here. Suffice to say, you can't go wrong with any of these products as they're all top tier and perform appropriately. So let's talk about the scent. Pure Lavender debuted last year with the August 26, 2017 release and is making its second showing this year at Chatillon Lux. It wasn't until the recent April 7, 2018 releases that Declaration Grooming provided the much anticipated "missing" soap!

I'm firmly of the opinion that you can never have too much lavender software! There are several lavender powerhouse offerings. Barrister and Mann Lavender (in black label and Latha - both now extinct) is one, which offers a bit of the green of the lavender fields to the scent. My favorite might just be their Barrister's Reserve Lavender though, which features Caldey Island lavender primarily, but in a slightly more complex accord that is very unique, very smooth and elegant. A simpler lavender is Wet Shaving Products True Lavender which is somewhat one-dimensional and more floral, but very nice. From here, accords get more complex - quickly.

The closest analog to today's Pure Lavender offering is Mickey Lee Soapworks Jefferson Square which also features four different lavender strains. Both are serious lavender players; neither are too sweet or floral but really emphasize the lavender in its most essential form. Whereas Jefferson Square loses a little definition; it's a bit muddied and light - Pure Lavender is a real lavender bomb. Despite the four strains included, each strain works with the others to emphasize and strengthen the more herbaceous and somewhat peppery side of raw lavender. If you want pure lavender at impressive strength, this is it. The scent strength is a high medium with sillage about a medium and longevity a good 6 hours. I talked to Shawn to clarify on the mix:

The star of the show is Maillette, a sweet and smooth lavender. Then the herbaceous French/Spanish lavender (lavandula stoechas) gives it some peppery notes and the Bulgarian lavender I see more as a blending element that kind of pulls the whole thing together but doesn’t have a defining characteristic to me other than just smelling like a lavender bomb. The St. Louis lavender is pretty peppery, too, and pretty potent, so it’s fairly low in the mix.

Hardware included the all-black #StandardRazors shaver with a #Gillette 7 O'clock (black) blade on shave six. The blade did a surprisingly good job at this point, but it's definitely time to replace it. The brush is a lovely #WildWestBrushworks piece with a 24mm Tuxedo knot and a purple, black and white resin color scheme... Making it my de facto "lavender brush." The #GTP scuttle rocked it.

So many good lavenders, but among the purer, simpler accords - Pure Lavender is one of the strongest contenders both literally and figuratively. I still prefer Barrister's Reserve Lavender overall, but this one comes in second, followed by Mickey Lee Soapworks Jefferson Square and Wet Shaving Products True Lavender picking up the rear. All of these are excellent, scent-wise but the performance nod definitely goes to the first two offerings (which is just as important). Seriously though, they're all winners in my book.