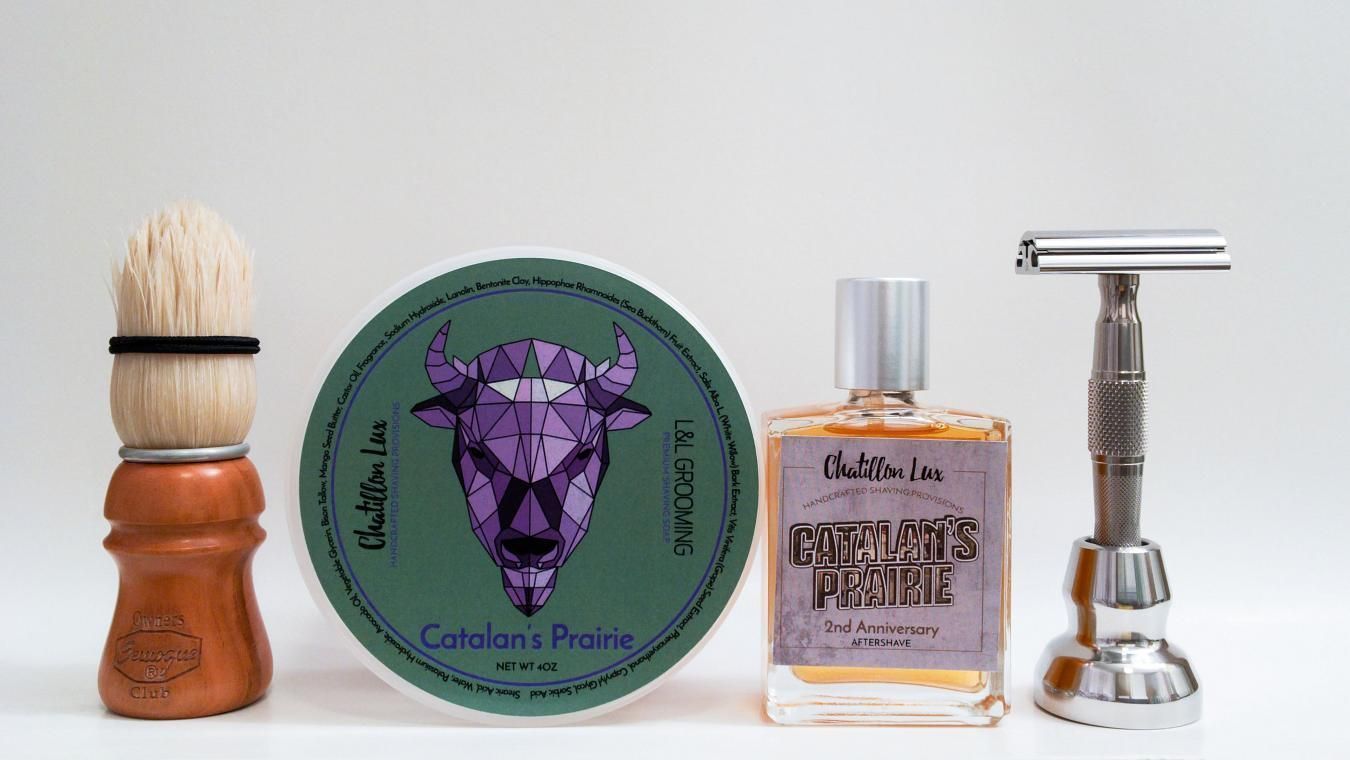 When Chatillon Lux and L&L Grooming get together, magic happens and for today, it's Catalan's Prairie in a #soap and #aftershave combo (with balm on the side for another day).

This scent is a throwback to original line up from two years ago when Chatillon Lux first launched with three scents. Before it was named Carondelet, the area that would eventually become South Saint Louis was a rough-and-tumble trading hamlet located on the outskirts of Saint Louis proper. The citizens of Saint Louis had a few different nicknames for this town, one of which was Catalan’s Prairie, a reference to the large Spanish population from the region of Catalonia. So we take a trip back in time with this scent, both in the history of Saint Louis and Chatillon Lux. The scent was designed to recreate the scents of prairie flowers in bloom during a sunny spring afternoon on the riverfront...

I've reviewed a lot of both #landlgrooming and #chatillonlux here (click on either hashtag to see them all) so I won't get into the soap, aftershave or balm performance here. Suffice to say, you can't go wrong with any of these products as they're all top tier and perform appropriately. The cost is just slightly above average on the soap and just at or slightly below average on the aftershave/toner/salve so basically a wash (and reflected above). Regardless, each is worth every penny. So let's focus on the scents used in this collaboration between the two artisans in celebration of the 2nd anniversary of Chatillon Lux and who makes the scent.

Catalan's Prairie has been available from Chatillon Lux on and off for a while, but on June 22, 2017 was made available again with a matching soap from L&L Grooming. It was actually one of the original scents, which unfortunately didn't seem to sell all that well and was discontinued about a year ago. It has made occasional reappearances for the fans (of which there certainly are a bunch) and brought back one more time for the anniversary. Officially, the notes include violet, jasmine, freesia, lavender, labdanum, and sandalwood. Overall, it's fairly floral with a musky amber and wood base.

On open, you get the florals - violet, jasmine, freesia and lavender. The violet and lavender layers on the rich jasmine, with a fresh, crisp green vibe coming off the freesia. As it dries down, the musky amber of the labdanum slowly overpowers the bright florals, which remain in the background before settling on a nice base of sandalwood. Overall, it's a vibrant scent that perfectly mirrors the artisan's vision of a spring bloom, yet mans it up at the end when you're ready to head out the door. If you're not a floral fan, there's that. Personally, I love florals. This isn't vastly different from say, Mayflower by L&L Grooming. We're talking different flowers, different finish - but the same profile; a "masculine floral."

Overall the scent strength is a medium in the soap and a lighter medium in the aftershave/salve. I didn't try the salve (a.k.a. balm) in this shave, rather the aftershave and longevity was a bit short; about three hours. You can layer the aftershave or toner on the salve for a bit more longevity... But you should probably plan to layer a scent upon this if you're looking to head out for the day; alas, there's no EdT available (a real shame).

On a side note, I had scratched at my face a bit too vigorously yesterday and drew a little blood. Since I had used Bon Vivant yesterday I reached for the salve (that I happened to have on hand) and equally as vigorous, applied a scant trace of it upon the scratch... It disappeared! No trace of the scratch; redness and any blood was gone (and bled no further). By this morning it was essentially healed.

Hardware for today's shave included the custom #TimelessRazor "mild edition" with a #Stork handle and a fresh #PolSilver blade. As usual, the #SOC, my standard brush for these softer soaps, loaded the soap and generated the sumptuous lather in the #GTP scuttle with aplomb. This lather is just superb. As expected, the shave was super comfortable and quite close. While not as awe inspiring as yesterday's shave with the more aggressive version, this is a fantastic daily driver that won't have your face all irritated from overdoing it (and it's still a better shave than most mild razors). It was near 12 hours or so before I felt any appreciable stubble, even along the jaw line this time... So much so that this morning I debated whether to shave at all.

I truly enjoy most of the Chatillon Lux fragrances. This one is just another example. It's a bit lighter than average, both in strength and longevity - but that makes it a great warm weather scent. The performance of every product pictured above is beyond reproach. From the hardware to this very special software... Pure shaving bliss today. Tomorrow I'll review the third and last scent released, and perhaps the most anticipated - Rose Santal. It sold out quicker than the others across the board.