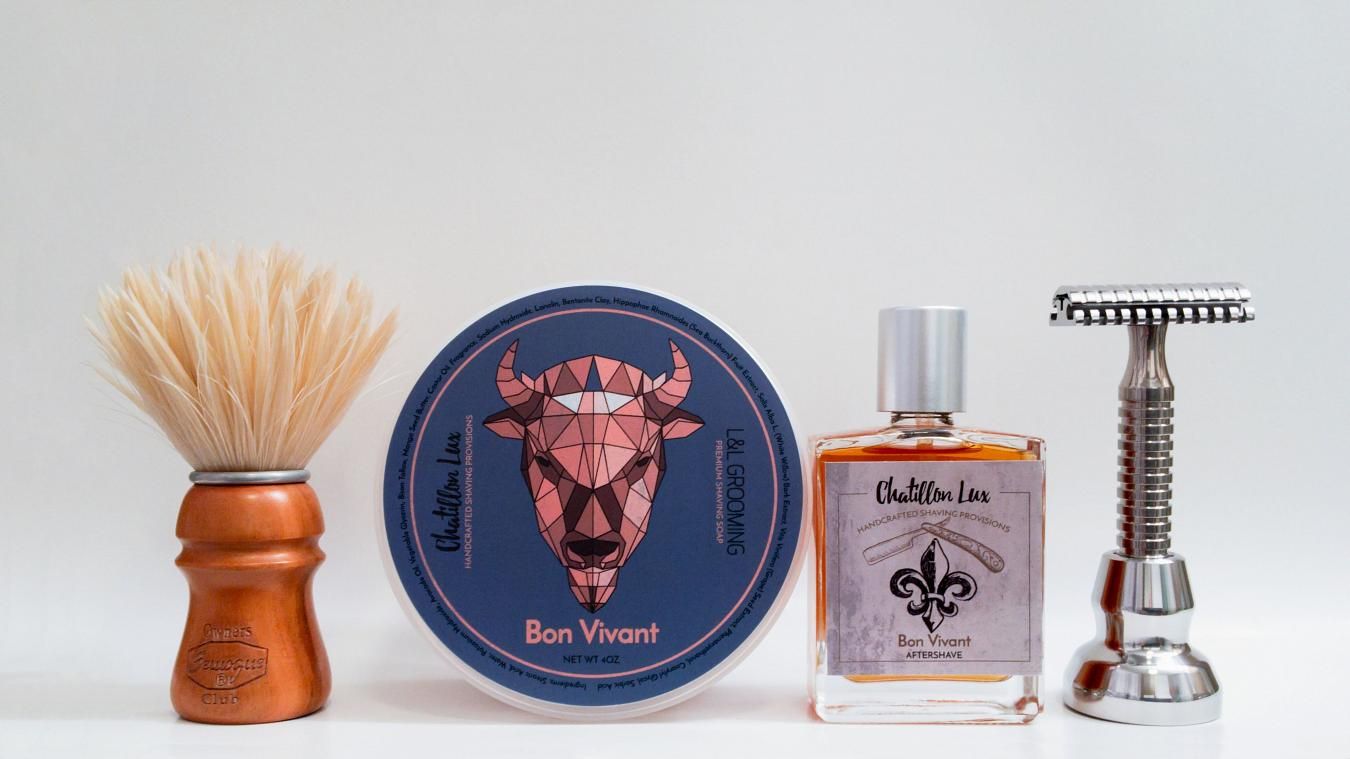 When Chatillon Lux and L&L Grooming get together, magic happens and for today, it's Bon Vivant in a #soap and #aftershave combo (with balm on the side for another day).

The scent is a tribute to "The Professor" Jerry Thomas who was the first celebrity bartender and wrote the original guide to bartending: The Bar-Tender's Guide: How to Mix Drinks or the Bon Vivant's Companion. He had a famous stint at the original Planter's House Hotel in St. Louis and gained notoriety for a drink that was set aflame, then tossed through the air, back and forth between two mugs. Chatillon Lux created Bon Vivant as tribute to Jerry Thomas inspired by a whiskey drink with chartreuse and orange bitters. The scent itself is spicy and warm with a twist of citrus on the top...

I've reviewed a lot of both #landlgrooming and #chatillonlux here (click on either hashtag to see them all) so I won't get into the soap, aftershave or balm performance here. Suffice to say, you can't go wrong with any of these products as they're all top tier and perform appropriately. The cost is just slightly above average on the soap and just at or slightly below average on the aftershave/toner/salve so basically a wash (and reflected above). Regardless, each is worth every penny. So let's focus on the scents used in this collaboration between the two artisans in celebration of the 2nd anniversary of Chatillon Lux and who makes the scent.

Bon Vivant (defined as, "a person having cultivated, refined, and sociable tastes especially with respect to food and drink") has been available from Chatillon Lux for a while, but on June 15, 2017 was made available as a matching soap from L&L Grooming. Officially, the notes include caramel, birch tar, black pepper, maple syrup, vanilla, patchouli, neroli, petitgrain, yuzu citrus, ginger, anise, juniper berry, white grapefruit, wormwood and coriander. That's quite a few! Overall, it's warm and citrusy - deep and complex. There are many nuances to be had and I'll probably need a bit more one-on-one time to really describe the scent best.

On open, you get a peppery, slightly herbal citrus that's sweetened by the caramel and maple syrup. The ginger and wormwood (another type of ginger) along with the anise add a bit of twang as it fades towards the middle and you get a bit more earthy towards the end with the vanilla and patchouli. On the base, the latter two are what linger (don't worry if you're not a patchouli fan; it's tempered well). It's a really lovely scent. Alas, citrus oils are fairly volatile and fleeting - quickly disappearing. It really does remind you of an old fashioned drink... Which is citrusy, a little bitter - and made with a small spoon of sugar, similar to drinking absinthe (which contains anise and wormwood as well). Pretty neat.

Hardware for a Monday morning, especially one with four days of growth - was a no-brainer. I used the custom #TimelessRazor "aggressive edition" with a #PolSilver blade on shave three. The #SOC, my standard brush for these softer soaps, loaded the soap and generated the sumptuous lather in the #GTP scuttle with aplomb. This lather is just superb. As expected, the shave was super comfortable and close, using the open comb side of the head exclusively. Another easy, peasy BBS shave on the books.

I truly enjoy most of the Chatillon Lux fragrances. This one is no exception. It's a bit lighter than average, both in strength and longevity - but that makes it a great warm weather scent. The performance of every product pictured above is beyond reproach. From the hardware to this very special software... Pure shaving bliss today. Tomorrow I'll review the next scent released, Catalan's Prairie.