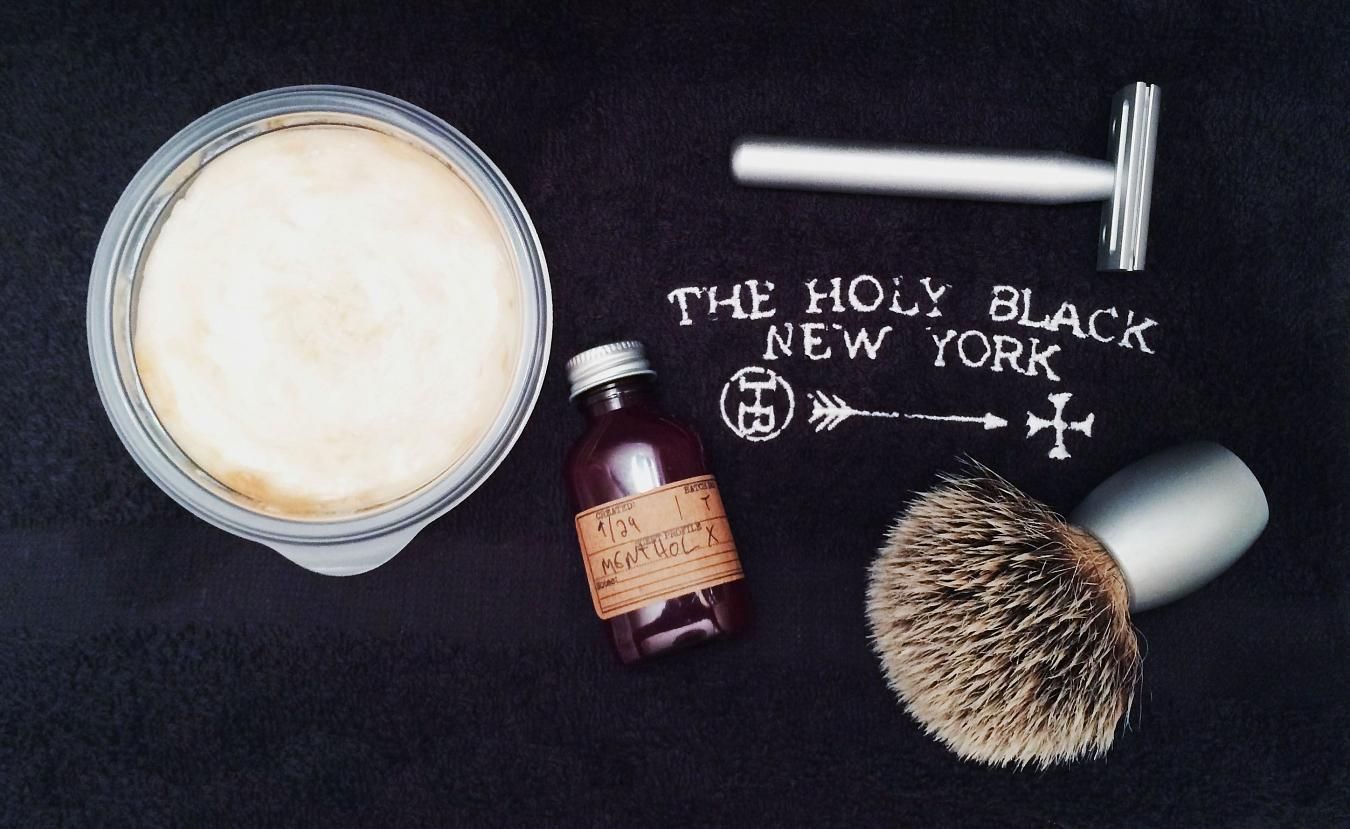 Today's SOTD is a special one, as I'm #testing the top secret (ssshhh!) new #aftershave from The Holy Black Trading Company codenamed Menthol X alongside their Goldrush #soap!

There are people that love menthol, and then there are people that love menthol. These self-prescribed menth heads (yours truly included) crave the coldest, most insane shaves imaginable and often seek out products to that end. For example, consider my obsession with Barrister and Mann Arctique as an indication. The problem with high-menthol software is that it generally leaves little room for actual scent and can adversely affect lather quality. There's also the intense eye watering and nose tweaking that goes with it. #TheHolyBlack is on a mission to change all that with a secret formulation that is, for now, called Menthol X and what I'll be reviewing today. I've reviewed Goldrush before so I won't repeat that part here.

After my shave, I liberally applied this concoction to my entire face and neck and was surprised by two things... First, there was no in-your-face menthol blast of vapors! My eyes didn't water, my nose didn't start running. There was hardly any indication of menthol at all, actually... The second thing to surprise me was the icy cold blast that transpired next! That awesome chilly feeling you get that us crazies seek out. The feeling was easily up there with some of the best of them (e.g. Arctique, Vostok, Yeti Snot and so on). Yet it was somehow... Different. I can't quite express exactly how, but it was slightly different than the usual menthol feeling. Granted, a huge part of that was the lack of face contorting vapors in my eyes and nose. But there was more to it. This cold feeling easily lasted at least twice as long as your typical menthol assault, if not three times (easily 15-20m vs. just 5m). It hung around like that obsessed ex-girlfriend. Just when you though it might be gone, nope - still there. After a good fifteen minutes it faded away for the most part, but there was still a bit of a cold tingle. Otherwise, the aftershave left my face feeling soft and moisturized and there's even a pleasant fougére scent that you can smell from application onward. Wow.

Hardware for today's adventure included the #StandardRazors razor fitted with a #PolSilver blade on shave five, the #Dovo silvertip badger brush and #GTP scuttle. A lovely, close, smooth shave today! You'll notice the killer The Holy Black shop towel in the background in the photo as well.

Great shave today with a very unique - and interesting aftershave. I was quite pleasantly surprised at the chill it produced without the heavy vapor impact that menthol generally delivers. The fougére scent is quite nice, but alas - was only experimental. When this juice is put into production, it will have a lavender scent. I can't wait - I know I'm definitely scooping up some of this stuff.