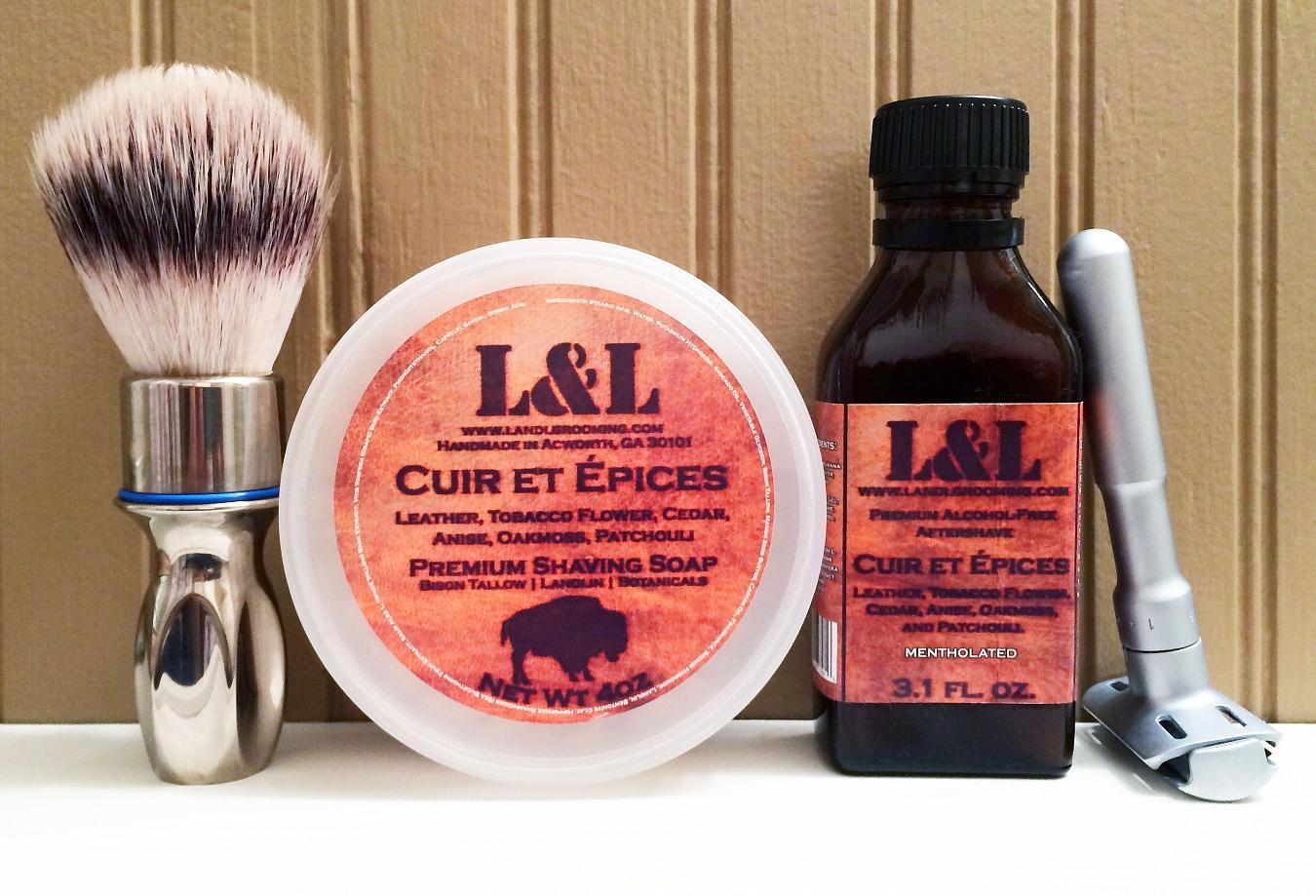 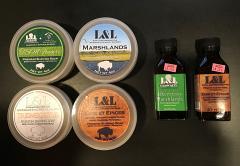 L&L Grooming week continues here at the Daily Lather and features the masculine scent of leather and tobacco that is Cuir et Épices #soap and #aftershave!

I don't want to get into the performance of today's software too much, since I covered it fairly extensively in yesterday's review of Darkfall and even last Friday's review of Harmony soap. I was so impressed, in fact, that I took a quick trip to Pasteur Pharmacy which I knew had just received their order of L&L Grooming goodies. As I suspected, I ended up walking out with literally one of each product they had stocked, which you can see in the second photo above! So yeah - there will be reviews for the rest of the week!

So just a few notes... I've finally gotten the soap dialed in pretty well. I did mention yesterday that the soap is quite soft and can be a little goopy to load; so I went in with a wetter brush today. It didn't really help; I suspect the rather warm water temperature may be partially to blame as I generally soak my brush in the scuttle while I shower. But that's okay - it loads quite thoroughly into the brush because of this consistency; so much so that 25s of loading is more than enough whereas with harder soaps I generally do a full 30s. I also went in with more water than usual in the scuttle, knowing that this was not only a thirsty soap, but appreciates hydration when it comes to sheen and slickness. What I whipped up was voluminous and more than enough for three passes... With some incredible lather. It was all there; cushion, glide and face feel among the best out there. This particular scent was the first of the #landlgrooming soaps to become available in the bison tallow formula - as recently as July 5, 2016! Now there are over half a dozen and it's a wonderful thing.

Now, let's talk more about this scent. The name Cuir et Épices in English, means "Leather and Spices" and is absolutely on-point. It features notes of leather, tobacco flower, cedar, anise, oakmoss, and patchouli. The most prominent notes are the leather and tobacco flower but is wonderfully rounded by the other notes. The cedar and anise give the scent a little bite; the former can be picked out, but the latter a little less so. The oakmoss and patchouli add a certain bit of green, herbal earthiness to the scent - the latter a bit of muskiness as well. I freely admit that I'm a fan of patchouli; I know a lot might not be, recalling visions of dirty proto-hippies of the 90s and head shops... But I assure you, it blends masterfully into the overall scent, which is masculine and rich. What remains on dry down is mostly a leathery musk, but slightly more complex. Worth pointing out is that the aftershave in this scent contains menthol; not too much but a healthy amount. It would be tempting to paint this scent similarly to the likes of Mickey Lee Soap Works Unforgiven or the well-known Barrister and Mann Roam but it's not quite so... Niche, or dare I say, a slight bit kitschy. Cuir et Épices is definitely a man's scent that can be worn in most situations, though it's perhaps a bit too rich for general office wear. Thankfully, my situation is that, that I can wear whatever I want - and I'm rocking it today... And it smells good, gents!

Confident in the soap's performance, I went with the #Merkur #Futur razor that I fit with a #PolSilver yesterday, on shave two today and adjusted to the "2" setting. Not quite as "Monday morning" as "3" but not as timid as "1" (or less), since I wanted a nice, close shave... Easily delivered! The #BSB Shaving Brush is pretty much my default brush most days and it's definitely a lather bomb, with its 25mm knot. The #GTP scuttle kept the awesome lather nicely warm on this, the coldest morning of the season yet.

With each use, I find L&L Grooming software to get better and better; granted some of it is me dialing in the soap and getting used to it as well. But once again, the resulting face feel today is just awesome. And the scent! Okay, so "leather and tobacco" might not be all that unique in the shaving world these days, but Cuir et Épices uses tobacco flower and just the right mix of other goodies to make it unique - and lovely. Another big thumbs up!