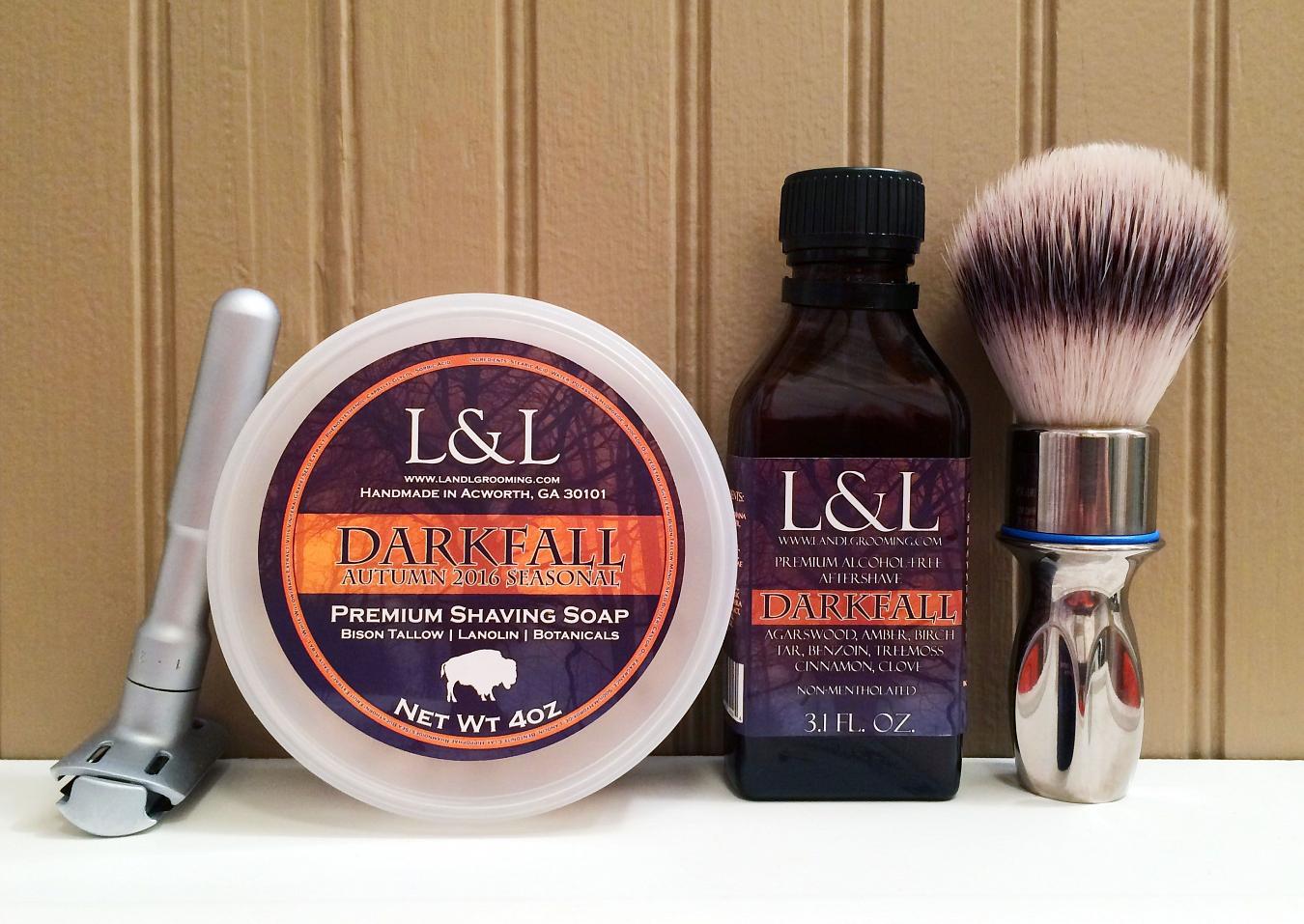 Today's software combo isn't at all spooky, but it's definitely autumnal in every sense of the word! The latest from L&L Grooming called Darkfall in the way of #soap and #aftershave!

Happy Halloween everyone! Halloween is probably my favorite holiday... And although I generally like spring most (it's still cool, and things are coming to life) there's no denying that fall has a lot more offerings when it comes to wet shaving, as the holiday season follows shortly behind. L&L Grooming Darkfall was released last Monday, October 24th and didn't even make it to the following weekend before it was all sold out... Combined with the price, performance and lots of recent press - it didn't stand a chance. Luckily, I knew it would be big, and the scent totally spoke to me, so I ordered some. Good thing, as it won't be available short of a week or so, but thankfully produced until the end of December! It arrived on Friday, just in time for the weekend (see the second picture). It was hard, but I waited until this morning to give it a go... Though I've been applying the aftershave to the top of my hand and snorting it all weekend!

The scent... We know it's autumnal, but what does that mean? Well, it combines notes of agarwood, amber, treemoss, benzoin, birch tar, cinnamon and clove. Don't freak out at the mention of either cinnamon nor clove. Although they tend to light some people up - they're very much in the background here. The prominent top notes are the leathery smokiness of the birch tar and woodiness of the agarwood and treemoss. It's definitely woodsy, somewhat leafy - but not as green as you might suspect. The amber and benzoin warm it up and that's where the aforementioned cinnamon and clove come in, adding just the right hint of spiciness. Like burning leaves in late fall, the scent truly captures the fall spirit and is, in my opinion... Very intoxicating. Well done!

Let's start with the soap. I rushed to review the Harmony soap on Friday morning, both to see what I was in for today, as well as to get a taste of L&L Grooming in general, which while I've certainly heard of - haven't experienced yet. Long story short, the soap is phenomenal. It's a rather soft consistency, and if you load with too dry a brush, you'll just get a goopy load. Unlike Friday where I went in with too much water, today I started off carefully, adding it as I went. The first pass was a little on the dry side but by the time I went into pass number three, it was fully hitting its stride. It takes a wide range of water, but really shines when you hit the sweet spot - literally and figuratively. I was able to produce abundant, creamy, very cushioning lather with excellent glide and residual slickness. I'll have to work a bit more on dialing it it, but it was clear from the get go that this is a great base. Naturally, it varies with the amount of water you add, but it's truly slick, both during the shave and even after a rinse between passes. No problem making touch up strokes. Lots of cushion. And like Harmony the scent strength is quite healthy; Darkfall perhaps a bit lighter (mostly due to the nature of the nag champa; it's pungent). The ingredients are quite choice:

The aftershave captivated me from the mailcall straight through the weekend. It goes on strong, mellows and changes a bit on dry down - but lasts for hours and hours. I easily got four hours, if not a couple more beyond that. Even standing outside, I could still pick up the scent wafting in the wind. It drove me nuts having to wait until this morning to give it a proper go. I noticed that in applying it, swirling it around, it produces an unusual sheen; no doubt the result of the interplay between ingredients. I have only one negative to report. As much as I detest restrictors that are, well, too restrictive - I care for ineffective ones even less. Unfortunately, the restrictor in L&L Grooming aftershave bottles is the latter. Not only is there a generous hole in the middle, but four more slots surrounding it. Even covering it with my thumb while dispensing it, it's very, very easy to dump out quite a bit. And using too much leads to a tacky feeling until it's properly soaked in. With a lighter application, there's no tackiness whatsoever. I'd implore Scott to change this. Otherwise, the packaging is probably among my favorite of his offerings; Darkfall looks fantastic. The ingredients of the aftershave, much like the soap, are exemplary:

Between the soap and the aftershave, the face feel is just outstanding. Smooth, supremely soft and feeling well nourished/moisturized. The aftershave follows a sort of "trend" in the industry of being alcohol free. While I love The Burn™ as much as the next guy, sometimes it's nice just to use a splash that's totally calming. I'm also totally over that whole "alum thing" in splashes. No, this stuff goes on smooth - and can be shipped anywhere! I'd consider the offerings from L&L Grooming to be very much top-tier. In line with the likes of Barrister and Mann or Cold River Soap Works and even doing extremely well against Saponificio Varesino (which as you might now, is what I consider the best out there). This is very high regard indeed. My hat's off to Scott, and I'm certainly a convert - and will be picking up more goodies very soon!

Hardware today consisted of the #Merkur #Futur with a brand new #PolSilver blade, set to "3" - making for a truly remarkable close shave. Textbook BBS in comfort, which the software highlighted to a tee. The #BSB Shaving Brush whipped up the plush lather in the #GTP scuttle, which kept it nice and warm on this chilly fall morning.

I'm beside myself at the lovely, lovely shave today. I had a teasing taste on Friday of #landlgrooming soap, but today with the aftershave to complete the experience... I'm sold. Don't be like me and hesitate... Had I known what I was missing, I'd have definitely jumped on the recent Champs de Levand collab with Chatillon Lux and I'm still kicking myself for missing out on that one (if you have one for me, drop me a line!). Well that won't be happening again! Happy Halloween - and happy shaving, gents!

I've spoken with Scott, and he's keenly aware of the restrictor issue. I don't want to say too much, as I'd rather he do that... But I wanted to clarify a little. Suffice to say that the issue is a bit complicated. Nevertheless, I'm satisfied that the concern was heard, validated and being addressed. It should in no way deter you from picking up some L&L Grooming products!