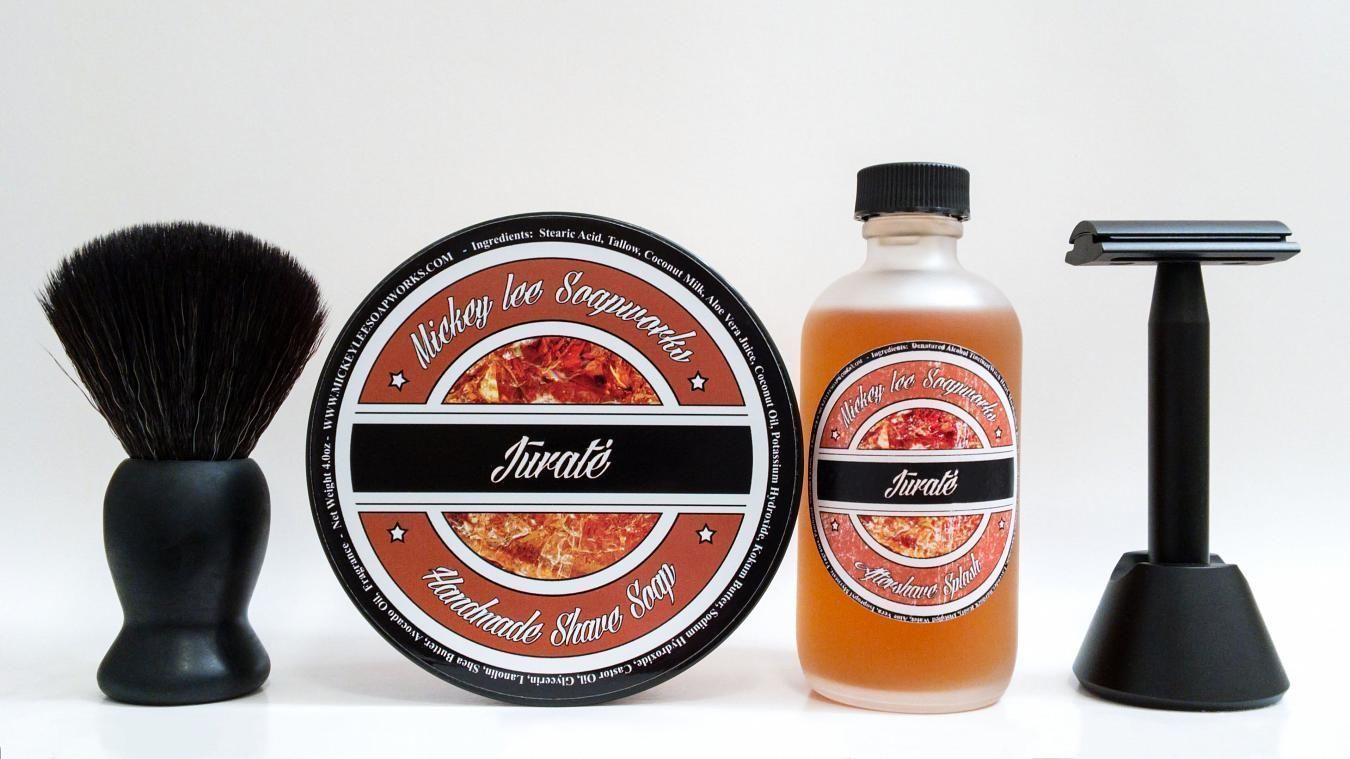 Back to school special! A bonus fall scent shave to close out the week, ahead of the holiday - with Mickey Lee Soapworks Jūraté #soap and #aftershave from their 2016 fall release.

From 2016 there were a bunch of Mickey Lee Soapworks releases and the headliner was Jūraté - their fall seasonal. I ordered it on October 29th, received it November 3rd and reviewed it November 4th. Oddly enough, that was the last time I used it - more on that below.

Jūraté, (pronounced ur-AH-te) is the goddess of the Baltic Sea. She fell in love with a young fisherman, Kastytis. When the goddess and her lover were eventually united in Jūratė’s amber castle at the bottom of the sea, the angry Thunder God struck them, almost killing the fisherman and destroying the castle. It is said that she remains chained to the ruins of her castle and that her tears turn to amber lamenting her lost love. On stormy days, bits of amber still wash up along the shore...

Officially, Jūraté is described as having notes of amber, cedar, sandalwood, hay, along with hints of rum and cinnamon. My original reaction was as follows...

The scent of Jūraté is interesting. Straight out of the tub or bottle, it's quite alcoholic - especially in the latter, obviously - but the rum stands out most. While it mellows out during lathering or dry down, it remains at the forefront. The combination of cedar, sandalwood and hay definitely give it a woodsy accord, but it's not sharp. The amber and cedar are what's interesting though... My first reaction (after the rum) was that Jūraté reminds me a lot of Souq as it has that same sort of vibe going on. The difference is that Souq comes alive with spiciness; Jūraté remains fairly steady, though the amber and cedar comes through a bit more and I think it's the cinnamon that draws parallels for me. I was definitely hoping for a more autumnal accord (like L&L Grooming Darkfall which I think will be the breakaway hit this season) and I hate to say it - but if I had to choose between the two I'd go with Souq. While similar, it just has more depth and both warmth and spice. I do like it, but I'll have to use Jūraté a few more times to get to know it better, so I'm on the fence about this one right now.

It is said that "you should try any new things at least twice" and today it was Jūraté's turn. I'm kind of glad I did, yet surprised it took this long. I guess I just had it in the back of my mind that I didn't like the scent. That changed a bit today; I like it more than I had originally. Though I'm still a bit on the fence. I obviously haven't spent the time with it, having used it only twice in nearly a year... Sniffing the aftershave straight up, obviously it still came off as quite alcoholic. In that regard, it reminded of the scents of Barrister and Mann Fireside soap or Chatillon Lux Colbeck aftershave. But today, the other notes were a bit more prevalent, or perhaps my nose is just working differently this time around. It's still an interesting scent, though.

Hardware was the usual for this week, the all-black #StandardRazors razor with a #Feather blade on shave five and I finally whipped out the matching all-black Satin Tip brush... Which I've started to call the "mini-Tuxedo." I'm almost convinced that the "hairs" are near identical in composition... A material called Taklon. I made this observation during my Satin Tip "The Purest" Brush - First Impression post, even. Though obviously, a real APShaveCo Tuxedo or Maggard Razors Black knot are much, much larger and denser (and with white tips). This is kind of like a 21-22mm version of those with less density. Not unlike the Mühle Silvertip Fibre knots... There's a huge jump from 21mm to 24mm in terms of density, besides the obvious size. The #GTP scuttle kept it all in check.

A nice fall scent, Jūraté is. While I'm still not quite sure what to make of it, it's growing on me. I guess that is its own answer though - I like it, but don't love it. Time will tell if #MickeyLeeSoaps will re-release it this year, or come out with something else. I have an odd feeling that it wasn't a big mover last year. Few people post SOTDs with it, and there was a flurry of resales on the forums after it came out. Perhaps I'm not the only one that feels this way. At any rate, the performance of Mickey Lee Soapworks software is very good and reliable. Obviously not every scent can be a hit, but you can't go wrong in trying!