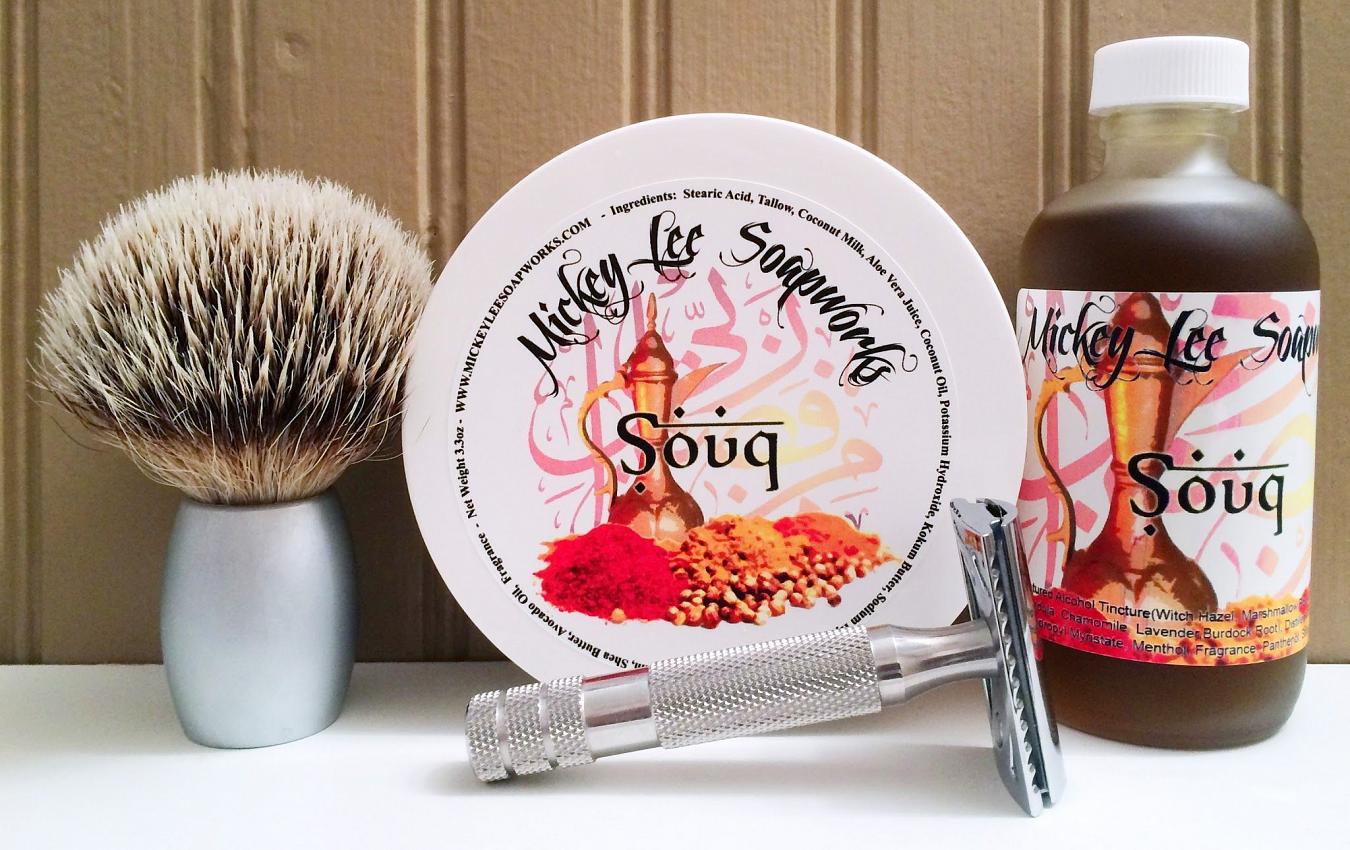 I covered the scent quite a bit in yesterday's #MailCall but I'll recap...

On open, the splash is strong... Definitely musky - but sweetened by fig. As it dries down, the complex blend of spices begin to take over. At first it's a little hard to pick out individual notes, but careful sniffing reveals tumeric, cloves, cinnamon, bay leaves, pepper, and ginger - as advertised. Neither the cloves nor cinnamon are overwhelming or stand out, though the latter is a touch stronger. I definitely get the bay leaves, pepper and ginger while occasionally getting a hit of tumeric. The base seems to offer a sweetish ginger mostly; but there's a lot more going on behind it. A warm, woodsy, spicy scent that's complex and exotic.

This matches the description of #mickeyleesoaps Souq and what made me jump on the chance to pick it up. It's as advertised:

Opening sharp notes of animal musk, like the many perfume stalls lining the streets and malls. Sweet dried figs, like the ones piled high in the markets. And warm, rich spice notes of tumeric, cloves, cinnamon, bay leaves, pepper, and ginger; like the ones carefully arranged in artful pyramids in the souqs (open air markets) in Manama, Bahrain.

The soap performance was quite good! As with any new soap, I erred on the side of caution and loaded a bit on the heavy side (25s vs. 15s). Turns out this wasn't really necessary - within short order I had a scuttle full of billowy lather. It scared me a little into thinking it might be too fluffy, with no substance... But once applied to the face it was creamy in consistency. Lovely cushion and ample glide from this soap. When I completed my three passes, I noted that the scuttle had a fourth one on tap, had I wanted one! I suspect that once dialed in, it'll be even nicer. The scent strength was decent - and so, so lovely. While it doesn't contain avocado oil or silk, it has all the right ingredients (as I'm a fan of tallow, shea and lanolin):

Between the soap and aftershave, the post-shave face feel was very nice. Moisturized feeling, but on the drier side; not overdone or tacky. The aftershave scent was robust and if yesterday's test applications are any indication - I get at least 6.5+ hours of scent longevity from Souq. The ingredients of the aftershave include some real players:

A quick note about the today; I went with #PAA Sandalwood #deo as it fit well with the scent profile. I would have used Scentsless but alas, it has just not worked out (for me at least). While it works well as an antiperspirant, the deodorant properties just don't seem to cut it. A shame, as I had high hopes for this version, to use with colognes that don't have a matching deo. When it runs out, I won't be getting more.

Hardware today was my trusty #Mühle #R89 razor fitted with a fresh #Feather blade ... I was too lazy to go downstairs and grab a fresh pack of #PolSilver blades, which are my usual go-to. Quite smooth and just a little extra bite for a nice BBS shave. The #Dovo silvertip badger brush made quick work of generating the suds while the #GTP scuttle kept them warm, while filling the bathroom with the exotic scent.

A really nice shave today, gents! I just love the scent of Souq - very exotic. Warm, woodsy and spicy. Great for the fall and winter. Face feel was also excellent and I'm happy with the performance of both products. I may just have to give another product a try!