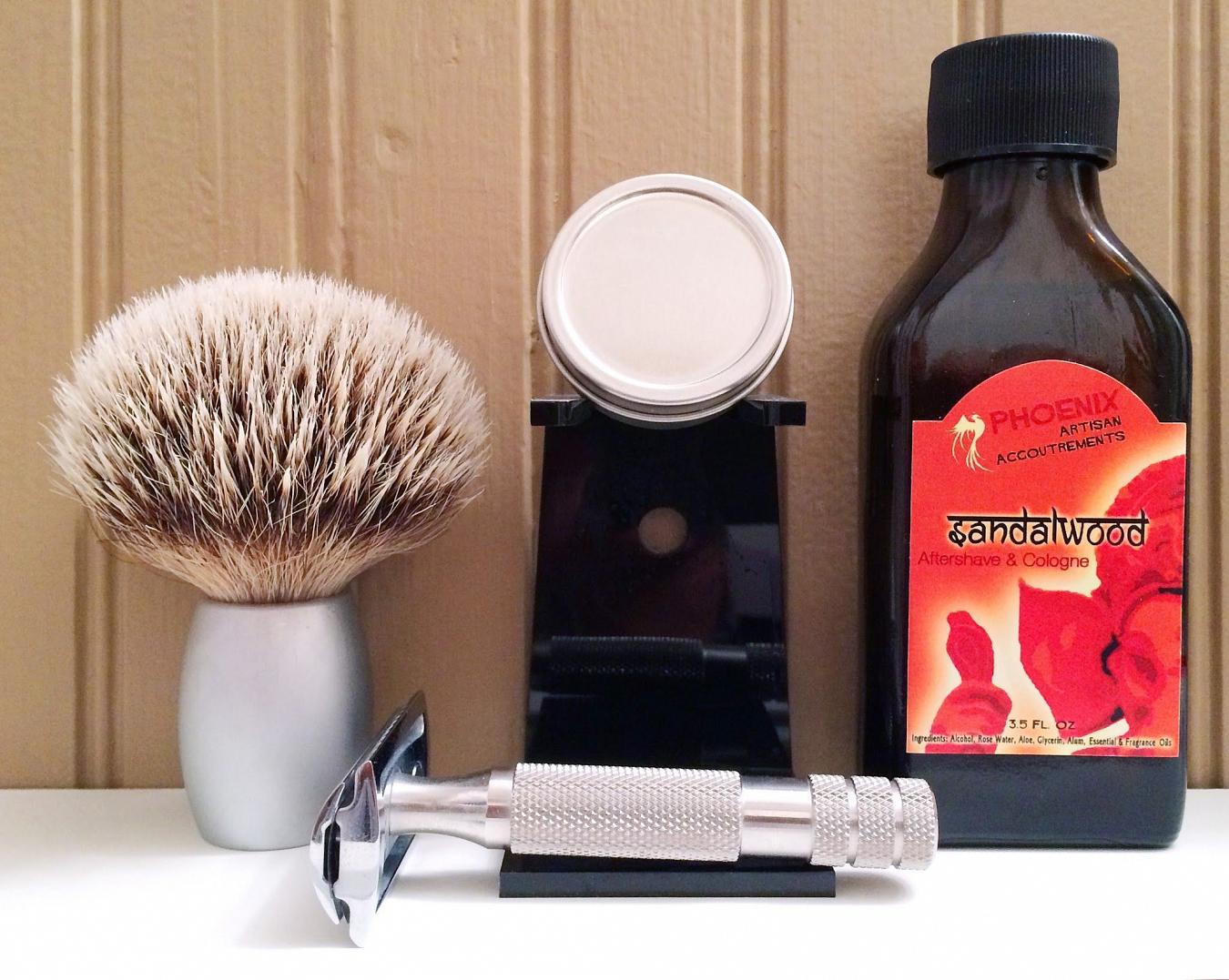 Cheers, mates! This SOTD makes part three in my #SandalwoodShowdown series and features one of the Three Ts - Geo F. Trumper Sandalwood #soap with a finish by PAA Sandalwood #aftershave and #deo!

You may have heard it mentioned before, the "Three Ts" of English offerings; (Geo F.) Trumpers, Truefitt (& Hill) and TOBS (Taylor of Old Bond Street). A little silly, really - as there are several others offerings from the UK also, including Mitchell's (Kent), Penhaligon's and D.R. Harris to name a few, plus Castle Forbes if you include Scotland. But I digress.

Geo F. Trumpers is a pretty well-known brand in shaving circles. They offer a lot of scents and it's hard to miss the strongly (overly?) colored soaps and creams, with notes like lime, violet (lavender), rose, almond, coconut and sandalwood. Today we're trying out the latter; sandalwood. This cream is actually white, and while it does smell sandalwood-ish - it's a sweeter, powdery kind of sandalwood. Not readily identifiable as such... More like "I think I smell it in there." It's light to medium in strength. Neither here nor there, really - if I sniffed it on the shelf, I'd probably put it back. Not that it's bad, but... It doesn't grab me.

The performance, I thought, was pretty good. A small snurdle of it made copious lather. A slightly thick, creamy lather - with surprising slickness. It felt nice on the face. Made for a nice, comfortable shave. Post-shave face feel was nice as well; smooth, somewhat moisturizing. I was a little surprised at the slickness, honestly. Quite good there.

However, for the money, I think you can do better. It costs about $30 for a 200g bowl and $18 for a 75g tube. While the performance was average to good, there are better out there for the money (if not less).

I followed up with #PAA's Sandalwood aftershave and matching deodorant. The performance is a known quantity; good and the scent of course, perhaps should come as no surprise - is my favorite sandalwood scent. It too is a sweeter sort (over smoky) but still has a certain... Twang in the nose and exotic vibe. It paired well with the GFT though, which was kind of similar - but not quite.

Hardware today consisted of my #Dovo silvertip badger brush (seemed apropos for this "snobby" cream) and #Mühle #R89 razor fitted with a #PolSilver blade on shave three. The #GTP scuttle kept the lather nice and warm.

Righty right, then, me brothers. What's the verdict? The Sandalwood is decent... Not bad at all. Would I buy some, now that I've tried it? I have to say, probably not. Between the scent and the performance, combined with the cost - it worked out to be fairly average overall.