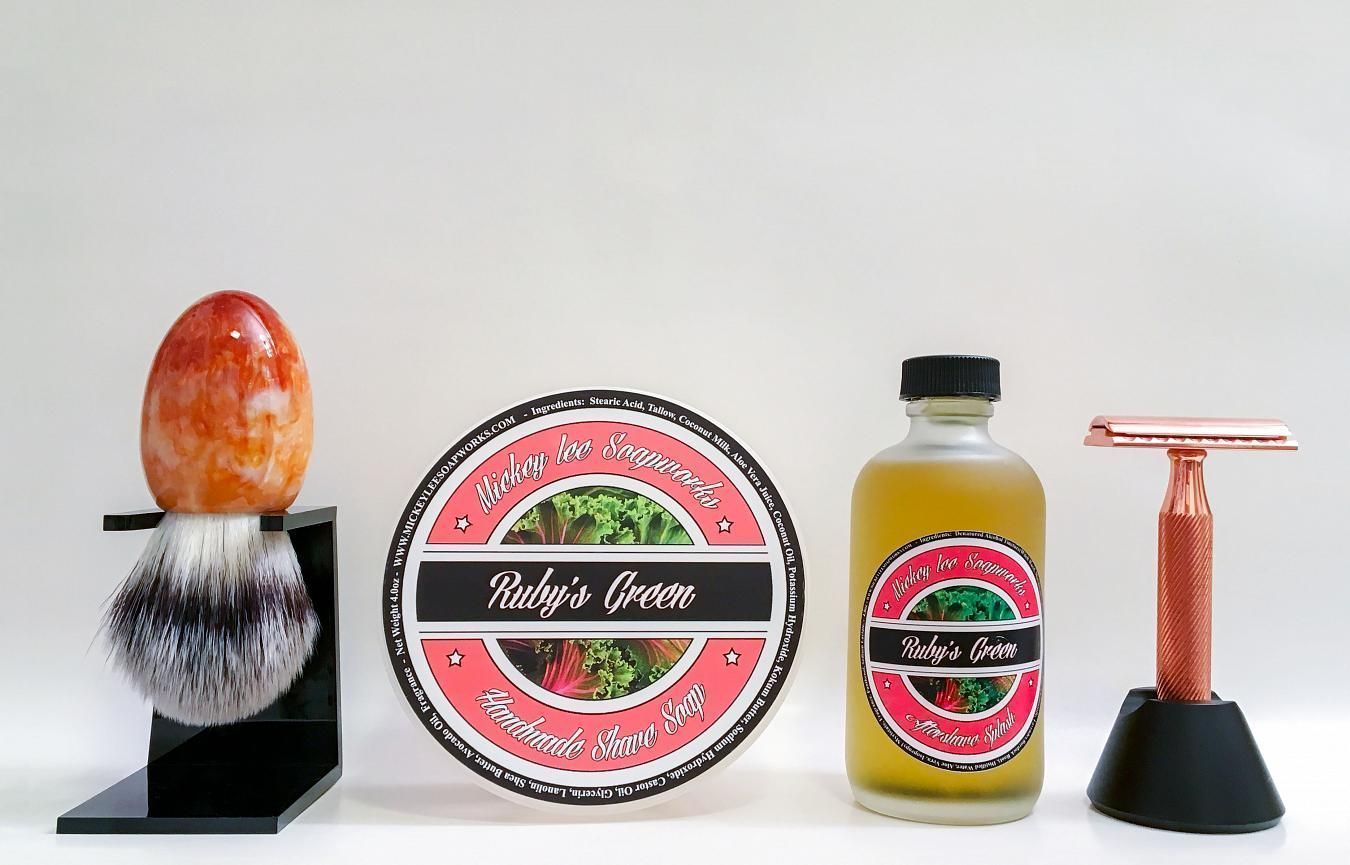 Nothing epitomizes the coming of summer like a garden lush with produce. The rich soil, the scent picking a juicy tomato leaves on your hands, the freshness of a head of lettuce…this is what we tried to capture in Ruby’s Green.

A bright green, slightly dirty scent of a tart, herbaceous green tomato garden with a hint of bergamot and crisp, watery lettuce. Immerse yourself in the scent of summer without getting your hands dirty.

I done extensive reviews of countless #mickeyleesoaps (click the hashtag to browse them all) - so check them out for more information as far as performance goes. As mentioned, this scent is one of three in a Summer Revival release on July 25, 2018 that are enjoying one last hurrah before disappearing forever. The three include today's scent, Ruby's Green and La Belle du Sud - along with a rather shocking one, Paradise Frost! The latter was released only once before on June 10, 2017 but was very, very well received by all. Bummer...

First, a brief note about the soap tubs. They're no longer the (excellent, in my opinion) Parkway tubs that so many artisans use these days. They are robust, come with white or black lids, transparent or opaque bottoms, the sides are flush... The very problem however, was their robustness - they weigh more than the replacement tubs, and with shipping costs increasing... It just wasn't feasible to use them anymore. The new tubs are like those L&L Grooming used to use. To be perfectly honest, I'm not a fan. I'm not bothered by the lack of sturdiness, rather the fact that the sides are no longer flush... Which in my case - standing them up to photograph, is more difficult. As is storing them horizontally, and you can't give the lid a spin to close it (most of the way, anyway).

Scent wise, the notes aren't even listed officially - but I have it on good authority... That the notes are tomato leaf, lettuce and bergamot. It's a bright, green scent, like a lovely garden in full swing (as described)... You get a lively green, slightly dirty vibe from the lettuce, with hints of spiciness from both the tomato leaf and bergamot; which of course adds a touch of citrus as well, brightening things up a bit and adding sparkle. It is what it is; a whimsical scent. I wouldn't call this a wearable scent really; more like a bridge to something else green, like a nice fougére. As such, there's not much sillage or longevity with this one. Plan on another scent for the day.

Hardware today was the #AboveTheTie #Windsor razor with a #Feather blade on shave three, with a black anodized aluminum stand borrowed from the black #StandardRazors piece I have. The brush is an interesting piece from #ThatDarnRob called Stone Egg featuring a relatively new (and certainly new to me) knot called the Silver Fox in a 26mm size. Of the synthetic knots out there, this one is the most... Natural looking. You won't fool anyone that you have a natural badger in there, at least close up... But it's a great option for when you want the look, but the advantages of a synthetic knot. At any rate, it did a swell job loading and lathering. I'd say it's similar to a Tuxedo as its bristles are a tad stiffer than a BOSS knot. I'll have to compare them a little more closely.

Now, about the handle shape... No, you can't stand it up - nor will this 26mm knot really fit in OTC stands. But! Since I use my trusty #GTP scuttle with every shave, it's not as impractical as it may seem. Surprisingly, it's not slippery any more than a chrome razor is (unless you get lather on either!). Color-wise, I really wanted one of the "Easter Egg(s)" released earlier this year, but I missed out - here (a second), here but especially here and here (also a second). This one is still quite fetching - and glad to have gotten it! A Cashmere knot might've been better, or obviously a real badger... But this knot does well and besides, I wanted to try it out.

A shave as expected, from the well-known properties of Mickey Lee Soapworks products. The scent is admittedly on the whimsical side. So don't expect this to be your scent for the day, as it doesn't have longevity in its favor either. But enjoy it for what it is - and layer a nice green scent on top. A nice fougére for example, or perhaps Guerlain Vetiver as I did today. I have most of the Mickey Lee Soapworks offerings, aside from the earliest and/or more esoteric ones. Grabbing a Ruby's Green combo was a low-hanging fruit to round out the collection... Especially since it's going away - after they run out, it's gone.