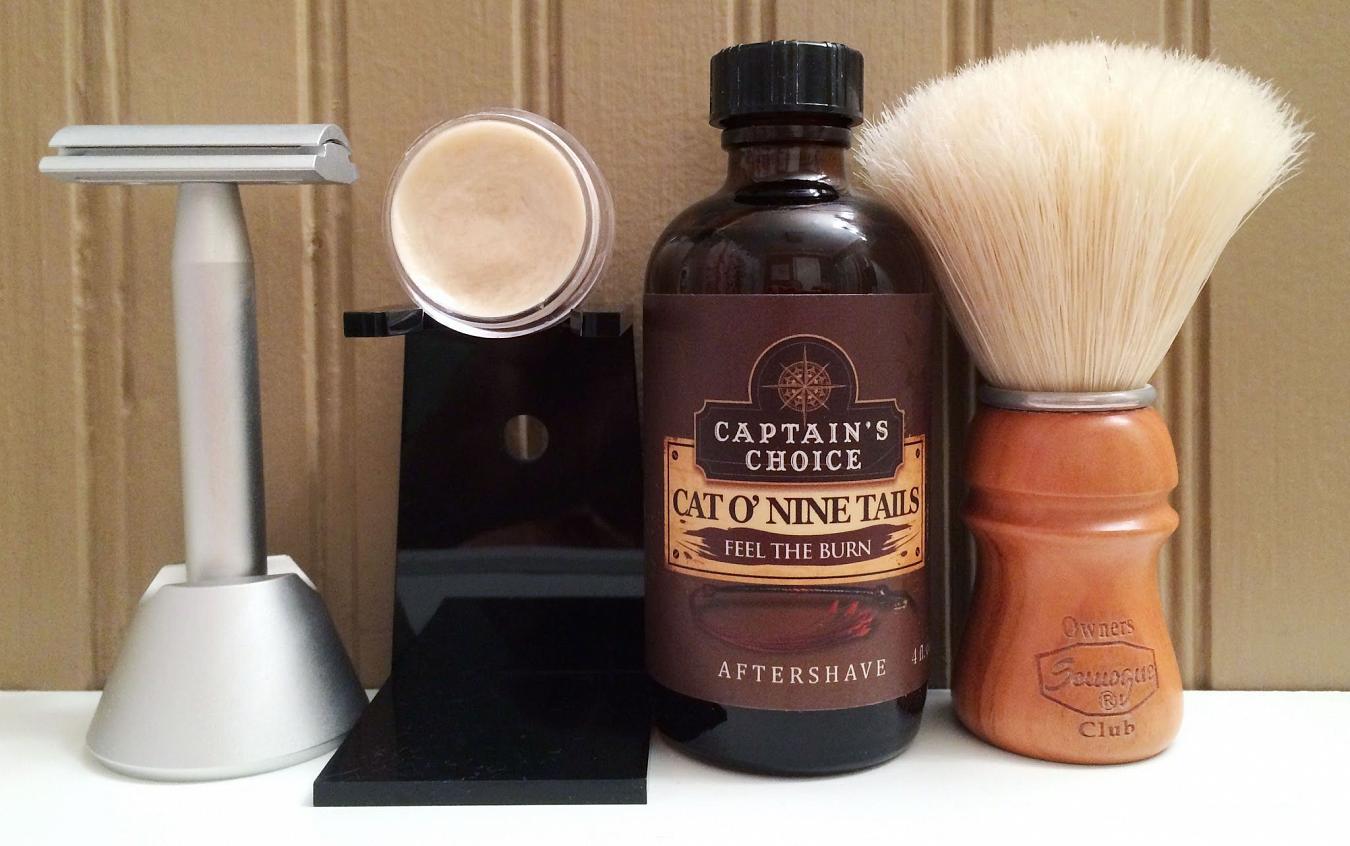 You know what SOTD it is... #HumpBay! Today's #soap comes by way of The Sudsy Soapery Citrus & Bay with a Captain's Choice Cat o' Nine Tails #aftershave finish!

The Sudsy Soapery probably isn't on too many people's radar (it wasn't on mine) and my sample was courtesy of Lorne Lehrer - thank you!!

Citrus & Bay is described as lightly scented with grapefruit and bay essential oils and I would agree; it's a light scent strength - but quite nice. I do wish it were stronger though, but that's just me. The consistency is a soft soap (croap). The ingredient list is quite interesting:

...It contains all the good stuff you look for in higher-end soaps these days, and it does not disappoint. Even using a sample, which can be a hit or miss experience sometimes, it whipped up into a plentiful amount of semi-fluffy/creamy lather with good cushion and glide. As I dribbled water into the scuttle, it just blew up. I suspect that dialing in the soap will net even better results, but I was not disappointed in any way. I did think the glide could've been a little better, especially as far as secondary lubcricity for touch-ups and multiple strokes during a pass... But again, that's probably just a matter of dialing it in (I was able to do touch-ups well after the lather was rinsed regardless). I guess I'm just spoiled by certain vendor's offerings lately. This is a nice soap, especially for the money ($10.95 for 3.5oz.). Thumbs up!

I finished off with a lash o' the tails - #captainschoiceproducts Cat o' Nine Tails which is "bay rum's evil twin." It's described as having a warming effect, above and beyond that of regular bay rums... Something I've never really experienced. Maybe my technique is too good, maybe I'm not sensitive to the ingredient (likely an essential oil) that causes it... I don't know. The face feel provided is quite good, despite the simple ingredient list:

Not too much different from say, Krampert's Finest which also provides a nice face feel. Also similar is the excellent rendition of a proper bay rum; spicy yet not over-the-top on clove - as it does not contain any. I just wish the scent hung around longer; it's a bit fleeting and I get 2-3 hours, tops. Either way, also good value for the money. And Captain's Choice has been on the scene for a number of years now.

The hardware today carried on the use of the #StandardRazors razor which I fitted with a #Feather blade yesterday (so on shave two today), the #SOC brush and of course, #GTP scuttle. Feather blades have an annoying habit of sometimes being a little rough on the first shave and settling down after that - so much so, that some folks cork the blades before use (something I don't do). I like the shave, but it's not as smooth as with my favorite #PolSilver blades. It seemed a little... Grabby today. Not stubble - skin! Twice I nearly nicked myself. Could be the soap, could be the blade... 'Dunno. No harm, no foul. But I'm going back to my go-to blade after this one.

A lovely bay rum shave today, with two very nice products that represent good value. If you've never heard of the #TheSudsySoapery then check them out - they have a handful of nice scents available, along with quite a few other products.