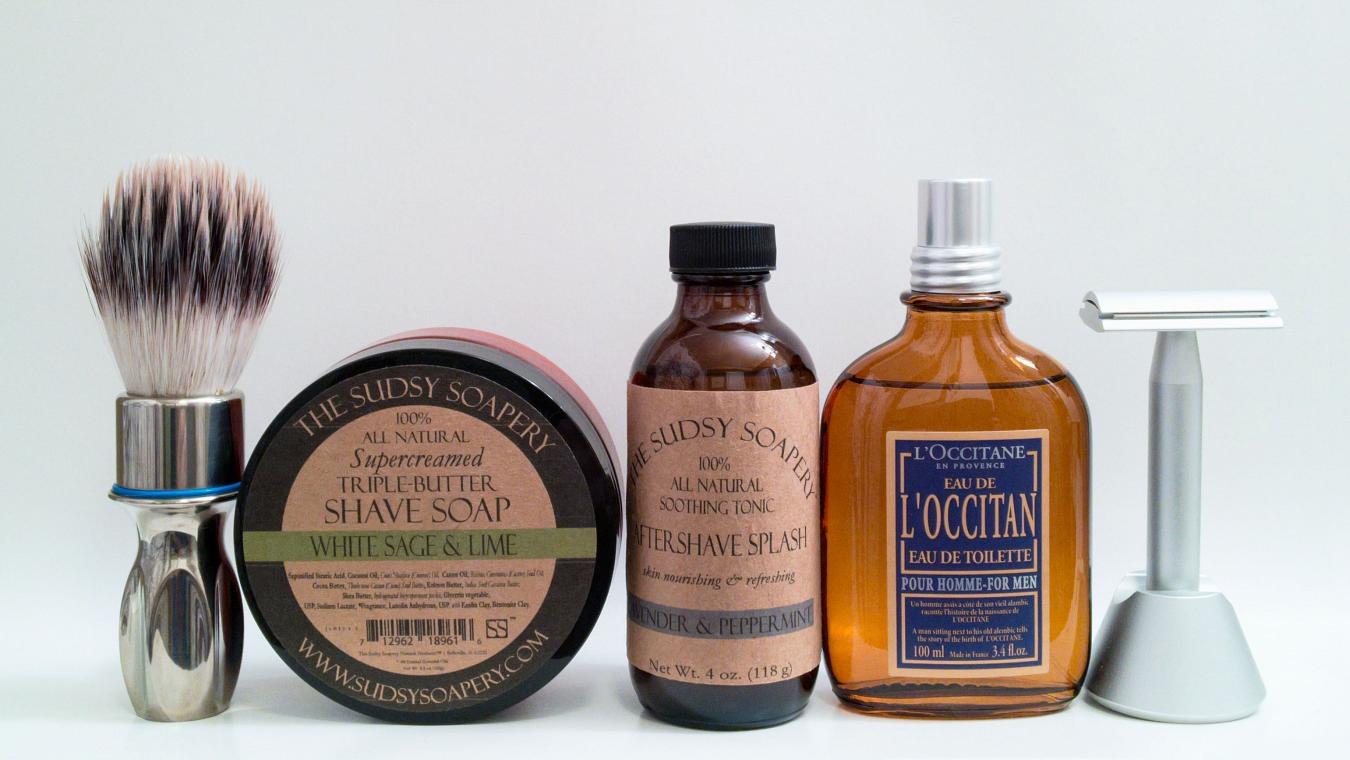 Another celebration that it's lavender season (with a plethora of other notes) by way of The Sudsy Soapery White Sage & Lime #soap and Lavender & Peppermint #aftershave - with a fragrance assist from L'Occitane Eau de L'Occitan #EdT.

As in my other reviews of #TheSudsySoapery software, it remains positive overall. The packaging is well thought out and presented, professionally and consistently. The price overall, considering the performance, represents excellent value. While the performance is a little mixed, it's nothing that should dissuade you from trying it in any way. I think the software is underrated, really.

The scents tend to be rather one- or two-dimensional, often carrying only a couple of notes... Just look at the accurate and apropos product names. The scent strength is on the lighter side of medium with a rather short longevity. I'd suggest these offerings to those with sensitive skin (or noses) or those looking to definitely layer another scent post-shave. And that's okay! Not every piece of software needs to smell strongly of insanely complex accords that lasts all day. In fact, during the warmer months you probably want to avoid this anyway. Their most recent offering, a soap made for the St. Louis meetup and a collaboration with Chatillon Lux - is called Delor de Treget. I haven't tried it personally, but I suspect it will solve both the scent complexity as well as longevity concerns (the aftershave coming from Chatillon Lux).

Just a side note; you may have heard of Lavender Creeper from The Holy Black that's been making the rounds lately. If you missed the boat, get yourself a bottle of Lavender & Peppermint aftershave! While the cooling agent is different (it's menthol) it's strong enough to compare quite well - to the net result of the former. You don't get the awesome packaging of the former either, but then the price more than makes up for it. And you can get the latter all day, every day - it's a regular offering. Both have the single lavender note.

I mentioned in the past that the soap produces a plentiful amount of semi-fluffy/creamy lather with good cushion and glide. I also mentioned that I thought dialing in the soap might improve the glide, but I consistently seem to get a good primary - but lacking secondary glide. It's there, but scant. I think this is something that could be easily tweaked in the formula and really take the soap to the next level. Otherwise, it performs quite well... And you get an above average amount of 5.5oz.

Hardware choice fell to the raw #StandardRazors razor fitted with a #PolSilver blade on shave two with the #BSB Shaving Brush having its way with the lather in the #GTP scuttle. A nice, close shave today... Though after yesterday's shave with the R41 there wasn't much stubble to be had, even a day later. That thing's a monster.

A nice shave, and a good reminder of the performance that The Sudsy Soapery software offers as I was hoping to get a tub of Delor de Treget. and pick up the aftershave from Chatillon Lux but it'll take a bit more work to obtain. Stay tuned on that front. Otherwise, for those days where a lighter, simpler scent is called for - this stuff fits the bill perfectly. Thumbs up on this software!