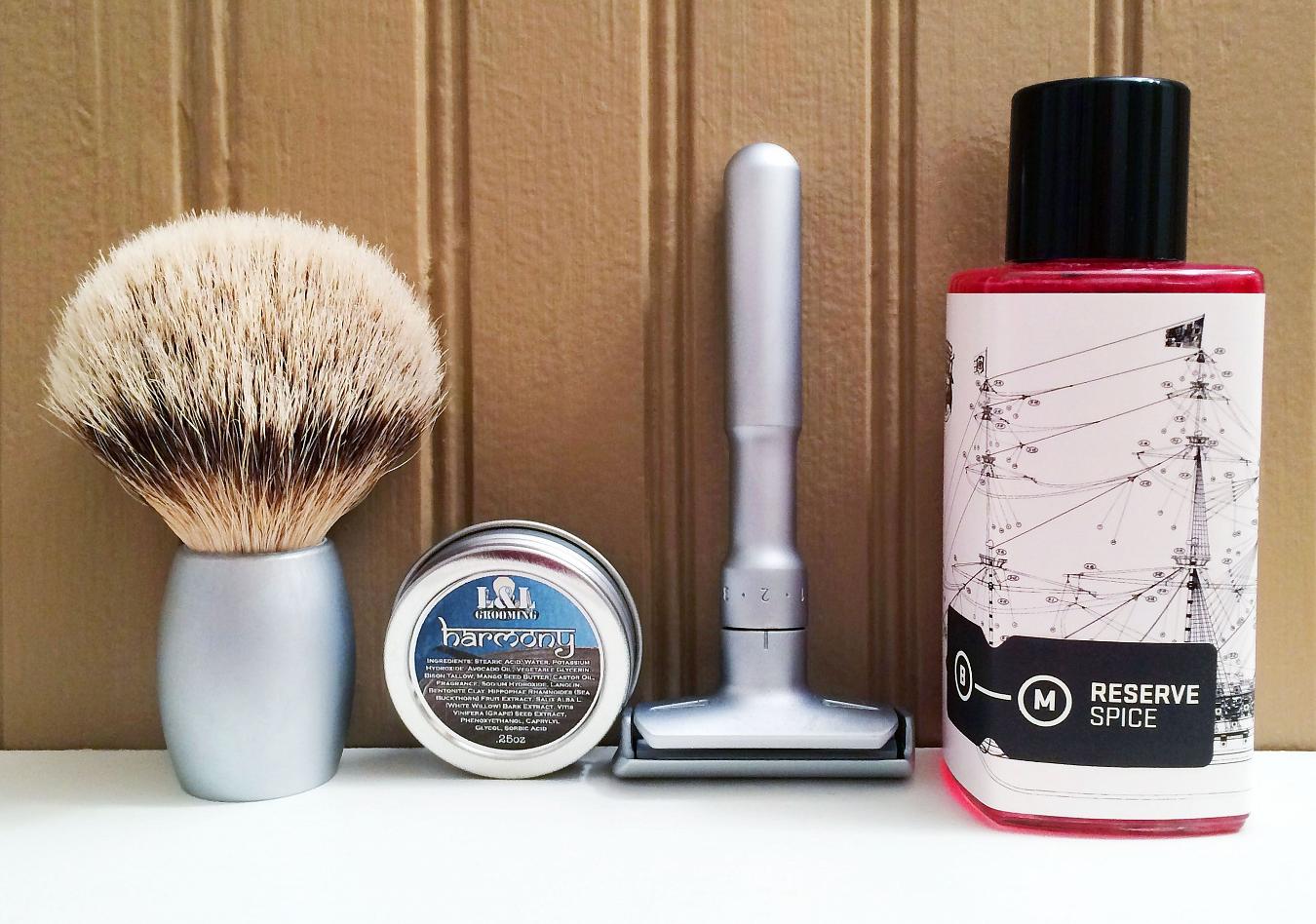 First I'd like to thank shave brother Alex Gonzalez for sending me a sample goodie bag, which included this soap! Not only very much appreciated, it helps make these reviews possible.

Second, a little background here. A while ago now, #landlgrooming appeared on my radar, but especially over the last couple of months - and I wager many others as well... They've been steadily making a name for themselves not just by the quality of their offerings, but several recent collaborations with #ChatillonLux in their Champs de Lavande and TSM Fougére scents. I know personally, when I checked out the L&L Grooming site, several of the offerings caught my eye. Initially it was Final Frontier which is a scent that literally seeks to capture "the smell of space." I recently picked this up in a used lot, and it's... Quite unique! Look for a review on that soon. But what caught my eye more recently was both Harmony and Marshlands as both are right up my alley... The former smells of incense while the latter of vetiver. Shortly after that of course, the aforementioned Champs de Levande and TSM Fougére came out, followed again by Darkfall. I could no longer resist and had to check this out. I have some Darkfall arriving today, so look for a review of that soon as well.

So back to today's study; Harmony soap. The notes are a "deceivingly simple" combo of dragon's blood and nag champa. I say "simple" because that's like saying you ate a curry dish. Curry is actually a mixture of many spices. Take nag champa for example, which itself typically has notes of champa flower, styrax benzoin, henna, geranium, Indian sandalwood, vanilla, honey and more. Not too dissimilar from an attar. Most people know it from incense - it's as pervasive as patchouli in hippy/head shops. Dragon's blood is a bright red resinous sap that is obtained from different species of trees. Like nag champa, it too can be complex. By itself, it has a rich, semi-sweet, earthy amber aroma. It also can be found as a fragrance oil with notes of amber, patchouli, rose and sandalwood blends with nuances of jasmine and citrus to bring out subtle spice undertones and base notes of vanilla and powder. This "simple" scent profile isn't looking so simple anymore... But the long and short of it is it smells like incense in all the best possible ways. I love attars and nag champa, and the smell of Harmony is right in there. In fact, it was the first thing I noticed when I opened the tin - along with the potent scent strength. If hippies and/or head shops make you recoil in horror, this is not the scent for you.

The other thing that immediately grabbed my attention is the bit of soap that landed on my fingers, which I rinsed under the running water as I waited for it to heat up as I filled my scuttle. It felt supremely slick! When the time came to load up, I pinched a chunk off, put it in the scuttle and whipped it up. I added a hair too much water, so it was a little thinner going in than I wanted, but the soap took it in style. Still very usable! Each subsequent pass benefited from the warmth of the scuttle and agitation of whipping with the brush, drying it a bit - and it thickened up. By the third pass it was almost how I normally roll. It never disappointed during the entire shave. The soap produced abundant creamy lather with very good if not excellent cushion, glide and secondary lubricity! I predict great things in my future with these soaps and look forward to trying Darkfall over the weekend or on Monday morning. The scent strength didn't waver much either and the bathroom smelled awesome. As for the ingredients, they're equally impressive with plenty of good stuff:

Since I didn't have the matching splash, I went with Barrister's Reserve Spice from #barristermann and as usual; it did not disappoint! Instant soothing, moisturizing and nourishment. Not to mention the excellent scent; a faitful (almost to a fault) recreation of the original Old Spice fragrance from Shulton. At any rate, I've reviewed Spice extensively before, so check that out for more info.

The hardware for today included the #Merkur #Futur razor, still rockin' the #Gillette 7 O'clock (black) blade on shave four. The #Dovo silvertip badger brush worked up the lather hot and heavy in the #GTP scuttle for a killer shave.

If you're not a fan of "incense" and the smells often associated with counterculture hangouts and Indian ashrams, this is not the stuff for you, my brothers. It smells faithful and pungent, as it was meant to be, with some truly top-tier performance. The bison tallow formula works. While I can't say the bison tallow part, specifically, makes a difference over regular beef tallow... It is rendered from 100% grassfed bison kidney fat. Which not only sounds good, it seems to work very well indeed. So I'm going to roll with it. If you're curious or have resisted - try some of their offerings!

See this follow up shave/review for more thoughts on the full-sized tub and matching aftershave!