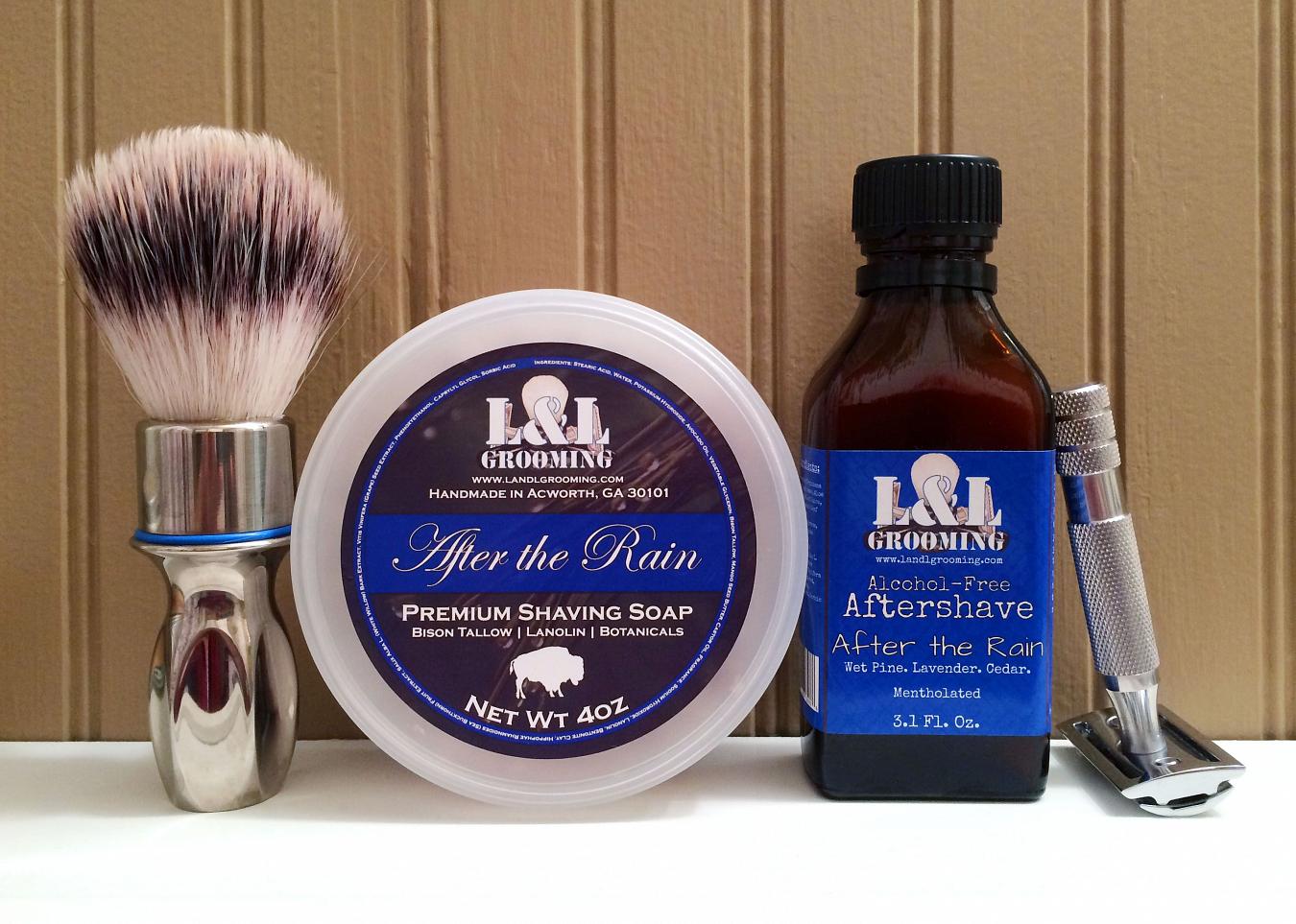 L&L Grooming "After the Rain"

Trying out the new bison tallow reformulation in the latest from L&L Grooming called After the Rain in #soap and #aftershave in this SOTD!

I've been doing a lot of L&L Grooming reviews lately - if there's any doubt, click the #landlgrooming hastag to see them all... At this point, I have their entire lineup (save for the new balms). When I reviewed the Harmony soap at the end of October, it was clear that this soap/base was something special. So I grabbed basically one of everything Pasteur Pharmacy had in stock and ordered the rest directly - waiting until After the Rain was re-released in their bison tallow formula to finally complete the collection. It's actually been in the L&L Grooming lineup since almost the beginning, and the scent description grabbed me back then... But now it's been made even better! Timing is everything, as they say.

I won't get into the performance too much except to say the soap is top tier; up there with B&M and CRSW even Saponificio Varesino in terms of face feel, when combined with the matching aftershave. The lather is plentiful; it's not as dense (and therefore as cushioning) as say, B&M lather - but it's decidedly creamier. In fact, when the soap is dialed in and the water just right, the lather has a slick sheen to it that has to be seen to be believed. Glide is excellent and residual slickness very good. While I think the B&M glissant formulation holds an edge over the latter, it's quite close. The aforementioned face feel may be a bit better here however, to the same degree. Both are really excellent software and you can't go wrong with either.

In the official scent description are notes of wet pine, muted lavender, cedar and white pepper. From both the soap, but especially the aftershave - you definitely get the wet pine note, backed up by the cedar. Overall, it's very woodsy. The white pepper, despite how it may sound (spicy) - rather adds to the woodsy vibe; more so in the middle. But there's more to it, as the lavender rounds it all out quite nicely; though it is subtle. Both in the tub and fresh from the bottle, the scent strength is a solid medium - though it's probably one of the lightest scents in their lineup after dry down... It just doesn't have the projection or longevity of their other offerings. Lavender is a very subtle, delicate fragrance to begin with and doesn't last in most scents I've tried, and this one is no different. I was a little surprised that the wood notes didn't stick around a little longer though. Nevertheless, it's a great profile overall - very woodsy and masculine with the edge slightly taken off by the lavender. You could easily mix and match with say, MLS Jefferson Square or B&M Lavender (Black Label or Latha) if you wanted to mix it up.

For the hardware today, I decided to forego my obsession of late, the #StandardRazors razor and instead go with my #Mühle #R89 that's been feeling rather left out. Loaded up with a fresh #PolSilver, it did not disappoint - delivering a very comfortable and close shave, though perhaps not as close as my other options. Nevertheless, it delivers every time with no irritation. The #BSB Shaving Brush had its way with the sweet lather, mixing things up in the #GTP scuttle.

What can I say? Another excellent offering by L&L Grooming here. After the Rain is a great scent profile, though I'm a little disappointed it didn't have the longevity as their other offerings (through no fault of their own; just one of those scents). The performance, however, was like the others - simply fantastic by any measure. If you like to use other colognes after shaving or prefer a mild scent for the day... This would make a fine combo. If you want something a little bolder, but of a similar nature... I'd suggest either Marshlands or Darkfall.