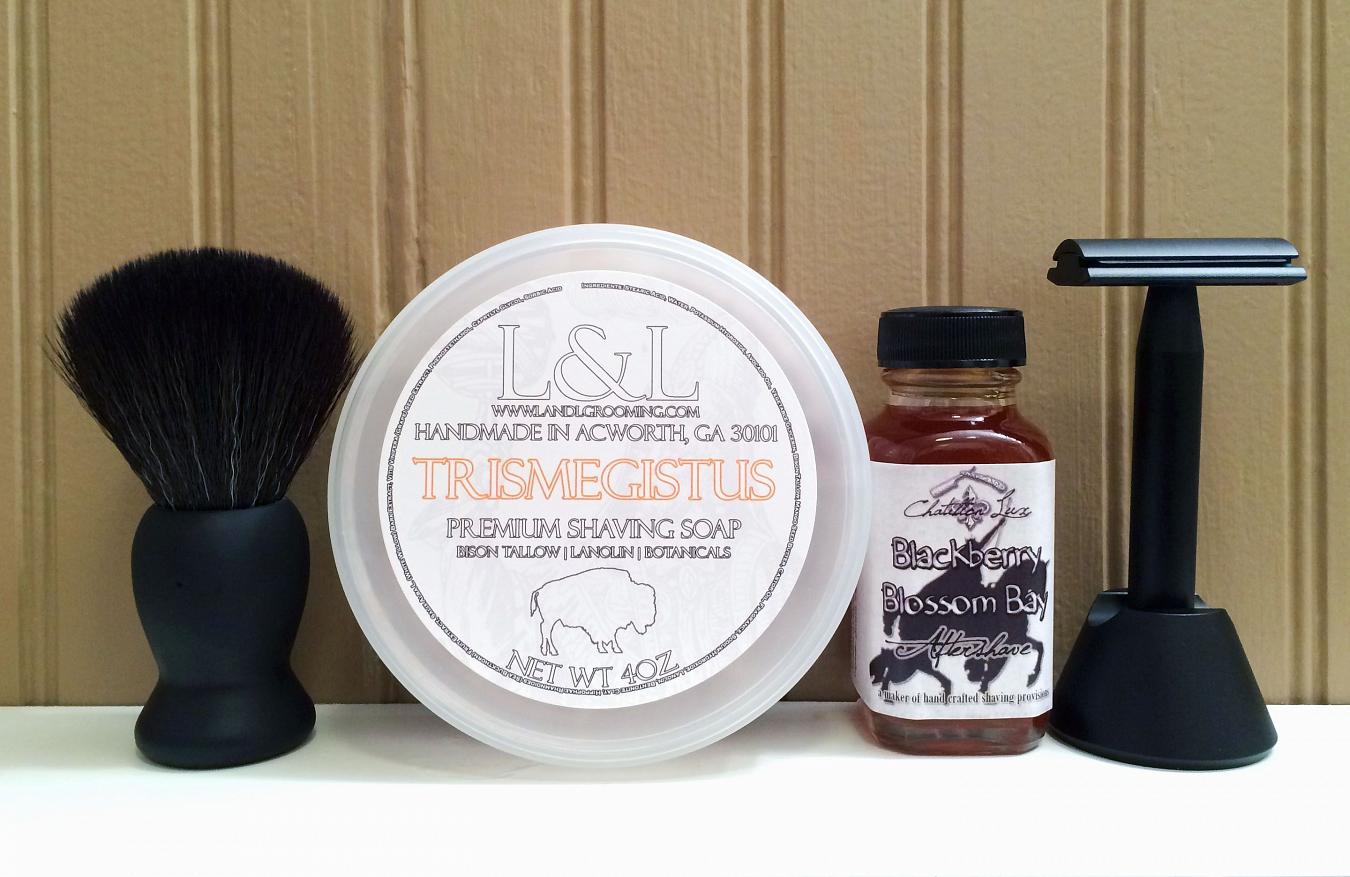 It's been quite a week now, using pretty much one of every L&L Grooming offering... So far I've reviewed Harmony, Darkfall, Cuir et Épices, Marshlands and today I'm rocking it with Trismegistus. I haven't gotten the matching aftershave yet, so I went with a custom batch from Chatillon Lux called Blackberry Blossom Bay - a very unique take on the classic bay rum.

Just a quick note, since I won't repeat anything regarding the performance of the soaps... It's good - damn good. Today I decided to mix things up a little bit, by using the Satin Tip brush and Standard Razors razor and see how they handled the soap. Going by my earlier experiences, I went in with a slightly wetter brush than usual and it loaded up perfectly. I did use a touch too much water, and while the lather was a little on the thinner side - the performance was still excellent. The affinity for water and glide of this stuff would make it a great candidate for straight razor shaving.

Now onto the scent. Blackberry Blossom Bay was a one-off batch for a forum that Shawn whipped up, and is totally his take on bay rum. It has notes of bay leaf, vanilla, sandalwood, tonka bean, blackberry, neroli, coriander, cinnamon. Here are some notes on the creation:

First I put together a couple bay oils with coriander and cinnamon to get the part of the scent that I don't dig. Then I used the vanilla scents with benzoin and tonka bean to mimic how the bay and rum interplay. Finally, I started looking around for inspiration to find scents that would make it into a scent that I might actually somewhat enjoy, and that's how the blackberry, neroli and sandalwood came into the picture.

He goes on to give a more topical description of the scent...

Going back to the idea of if bay rum is for pirates, this is would be for the more refined seafarer, I started thinking about steamboats going down the Mississippi River through St. Louis. I could imagine a collection of gentlemen, from river destinations like Memphis, New Orleans, and Baton Rouge congregating on the deck as the boat docks in the old city where the Gateway Arch now stands. This is a scent that I could imagine them smelling like as they listen to the band play "Blackberry Blossom" as they sun goes down behind the Old Cathedral and Old Courthouse, before they were considered to be old.

In practice, it smells divine and totally unique - yet unmistakably bay rum. The blackberry, neroli and bay leaf notes are pretty much at the forefront throughout, though they switch back and forth a little bit. The coriander and cinnamon add just a bit of spiciness to the bay and add some complexity; the latter enhanced further by the creamy benzoin and tonka bean (a.k.a. coumarin) that provides the warmth of vanilla, with undertones of tobacco. The sandalwood provides a solid base. The scent is a healthy strength on the better side of medium, and I get many hours out of it. Easily half the day if not more. Performance wise, the aftershave is very much like L&L Grooming and Saponificio Varesino - moisturizing like a balm, yet friendly like an aftershave. Slightly tacky if you use too much, but in moderation provides an incredible face feel of smooth, well nourished and moisturized skin. I'd probably lean more towards the cooler months with these products or at least drier days. Though there's a lot to be said for dried, sun-exposed summer skin too. Just great stuff.

Hardware consisted of the aforementioned black #StandardRazors razor with a #PolSilver blade on shave two, while the matching Satin Tip brush whipped up the lather in the #GTP scuttle.

This has been a great week so far with all these great soaps and scents from #landlgrooming and I finally got to use my #chatillonlux aftershave. Truly solid products that I think everybody should try at least once... Be careful, you may get hooked! My face has been feeling great with truly close, comfortable shaves.