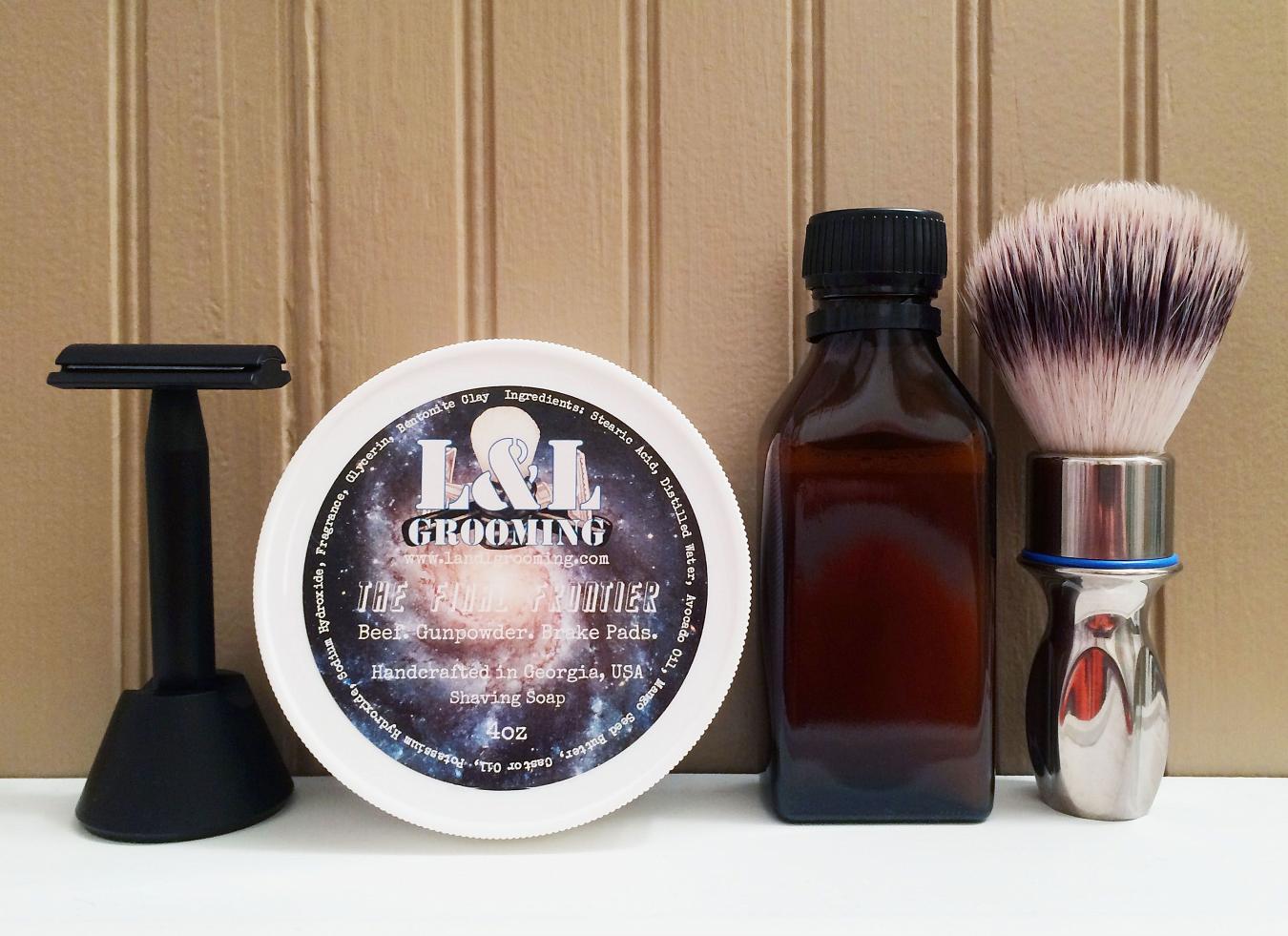 SOTD... The final frontier. Final Frontier by L&L Grooming that is! Leave the world behind with this #soap and #aftershave combo and embrace the smell... Of space!

I won't talk about the performance as I've reviewed most of the #landlgrooming soaps and aftershaves by now, except to say that this soap - which is not made in the bison tallow base... Is just about as good! I dare say it's a little different; maybe a little less... Plush? It's damn good soap; both in shave and post-shave (face feel) performance. I don't think you can go wrong with any L&L Grooming soap, honestly. The only note on the aftershave is that it's not mentholated... Which I think might be a missed opportunity to represent the coldness of space. Which, like revenge, is a dish best served cold.

For the sake of completeness, there's a bigger difference than just the bison tallow. Compare this soap's ingredients:

...with a typical bison tallow soap (Darkfall in this case) with those prior ingredients in bold:

So let's get to the scent, then. It smells like space! Whaaaat? There's no shortage of discussion on the matter, for example The Atlantic and Popular Science just to name two sources. Astronauts describe the scent basically as ozonic - like burning metal, seared steak and slightly sulfurous, like gunpowder. Indeed, that pretty much sums up the notes of seared beef, spent gunpowder, brake pads, and a hint of ozone in this recreation. The soap, off the puck and lathered - smells more like new brake pads - whereas the aftershave definitely leans more towards the seared beef and gunpowder. The smell of ozone is present in both fairly evenly and sits more in the background. Personally, I dig it... But a RFC from the SO came back with NFG. This is not a scent to wear if you're hoping to get laid, gents. Unless she's a full-on geek, fellow astronaut and/or a certified ASE mechanic. Even after explaining it, I mostly got "it smells like burnt rubber" with a nod regarding the burnt, metallic notes. To the untrained nose, it does smell... Rather weird. I don't know that I'd wear it to the office, in fact. But like I said, I dig it - as I certainly like all the components that make up the profile, which caught my attention from the minute I read about it - and why I was so keen to try it out. Alas, it would probably never be more than a weekend combo for most. My advice would be to go for the soap and maybe forget the aftershave. Unless you want the full experience. Or you're single.

Hardware today consisted of the #StandardRazors razor rocking last week's #PolSilver on shave three - which gave me a beautiful BBS shave on this fine Monday morning. The #BSB Shaving Brush made quick work of the awesome lather in the #GTP scuttle.

If you want a scent that's out of this world (quite literally) and totally unique... More funk than B&M Roam (by a country mile)... This is your combo. There will be those that appreciate and love it for what it is - but for the average layperson, you can probably forget about it. Space smells both weird and cool, but not something most people will want to share with you. Regardless, like the rest of the L&L Grooming goods, the performance is simply outstanding; bison tallow or not. So don't let that dissuade you from picking up a soap without it.