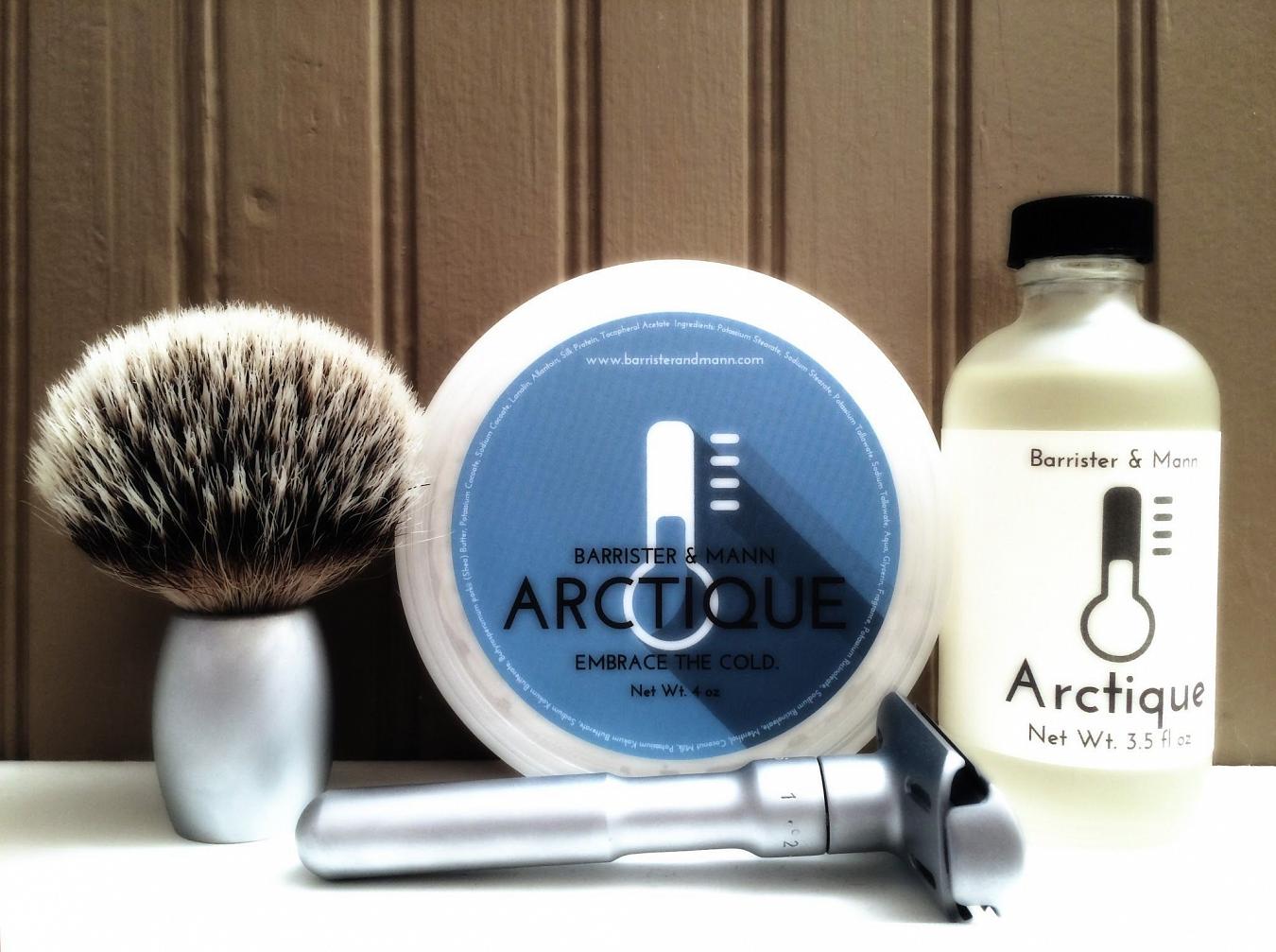 With temps and humidity forecast at ludicrous levels around these parts, this SOTD is all about Barrister and Mann Arctique #soap and #aftershave products. See yesterday's first impressions #MailCall as #MentholWeek continues.

As for the software, after reading the page on the #BarristerMann site for this limited edition "new and improved" Arctique I had high hopes... As I'm a certifiable menth head. First, what's new here? More menthol and a switch to a tallow, rather than vegan base for the soap... Which is produced in small batches yearly. This year's run was 150 tubs and went on sale July 21, 2015 - selling out on July 23!

The soap is reportedly "very thirsty" but oddly, I found that I had to load the soap longer than I'm used to, rather than add more water - which was my typical amount, at least for artisan products like PAA and Dr. Jon's. The lather produced was quite nice; creamy, fluffy, perhaps not as dense (PAA) or as slick (Dr. Jon's) as some. Performance was solid but lacked "wow."

Now, the question burning on everyone's minds... How was the chill?! Honestly, I didn't find it all that cold! Chilly for sure, but nothing like what I was expecting! I've used PAA Frost Byte, Dr. Jon's Arctic Hydra and Queen Charlotte Soaps Vostok (Vostok being the coldest). You get a menthol chill that builds as the lather spends time on your face and with each pass, as expected. Lather quality (cushion, glide, density) in descending order is PAA/Dr Jon's (tied), B&M and finally, QCS.

How was the aftershave? Much better, more chilling than the soap. It was nicely chill, with an effect similar to PAA's strongest menthol (and then some) - approaching (but not surpassing) a fresh bottle of Krampert's Finest Frostbite. It made my eyes water a little, and I can still feel a chill an hour later. The face feel was good... But again, it didn't impress me. It lacked that slightly tacky, "moisturized feeling" as it lacks glycerin (like PAA aftershaves for example).

Bottom line? My experience with Arctique was relatively underwhelming from a chill and post-shave feel standpoint. While the performance of both products was solid, neither blew me away. That said, I'm determined to give it another go (tomorrow morning, in fact) to add another data point.

Hardware consisted of my #Dovo silvertip badger brush, #Merkur #Futur razor with a Bulgarian #PolSilver blade (on shave two) and the #GTP scuttle.

Check back tomorrow when I confirm or revise today's findings!