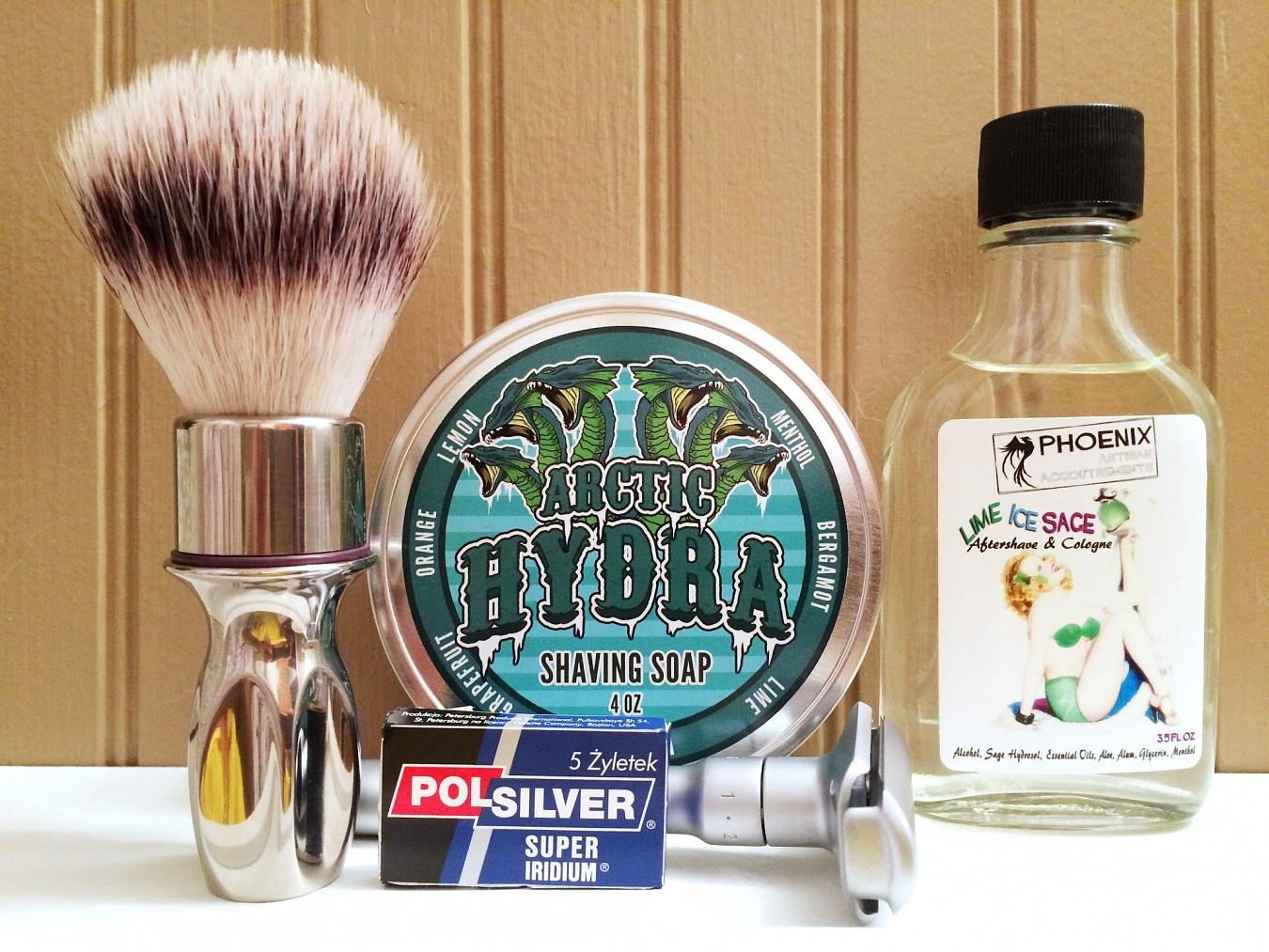 I'll try to keep it short, but I've got two products to rave about for this SOTD... Dr. Jon's Arctic Hydra and PolSilver blades! Like my shave the other night (http://tinyurl.com/or8wwoe) this was another "Shave of the Gods."

The star of the show here is the new Dr. Jon's Arctic Hydra #soap. I was a big fan of the original Hydra and I'm also a certifiable menth-head. So naturally, as soon as I saw it - I placed my order! It's a limited run of 900 tins... Unfortunate, as this stuff needs to be around 'til the End of Days! But alas, it's a summer edition. All that's great about Hydra is amped up with the addition of menthol.

Unlike the "one trick ponies" out there that are just all-out face freezers (which I love, mind you), Arctic Hydra has a pretty chilly feel... But not over the top. Most people should get along well with it as it's not eye watering. Just the perfect amount, IMO. Naturally, the performance and scent is top notch and strong, respectively. This is a ridiculously soft soap - nay - croap. You can't even call it a soap, it's that soft. My suggestion is to load with a soft(er) brush that's wetter than usual - which is good, as they're thirsty soaps. The lather is very thick-n-slick - it's like greased yogurt! Winner!

I paired it up with #PAA's Lime Ice Sage #aftershave because, well... Yeah.

The hardware star I want to call out is the Bulgarian #PolSilver blade. I raved about them in my Clubguy shave yesterday and this second shave on the blade was just as good as the first! That is to say, silly smooth in the #Merkur #Futur razor - and super close as well. Absolutely top notch. I had a feeling these blades were special when I tried them in my #Mühle #R41 ... They're even better (smoother) in the Futur! I think they're my new go-to blade... But it's too early to say for sure. Previously I relied on #Gillette 7 O'clock (black) and #Feather blades... Which are stupid sharp - but never THIS smooth... Except for those "planets aligned" occasions. The PolSilvers are smooth from the get go - and repeatedly! These were the last piece of my puzzle (as I was very happy with my razors). The #BSB Shaving Brush made quick work of the soap and the kept everything in check in the #GTP scuttle.

OMG, people. If you like citrus and/or menthol (especially both), run - don't walk - and grab some Dr. Jon's Arctic Hydra! Grab some PolSilvers too while you're at it...