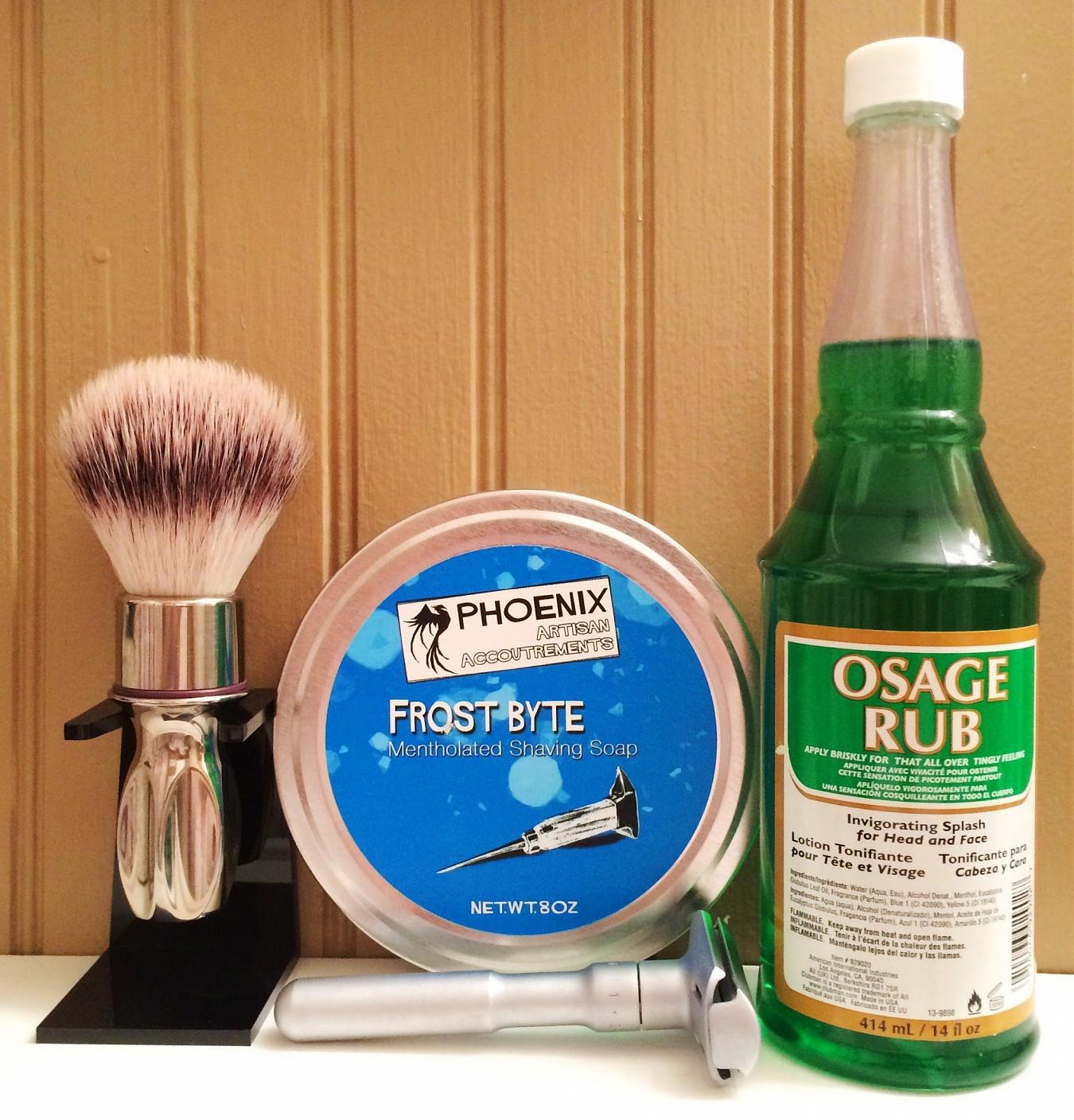 #MentholWeek continues with this SOTD, featuring PAA Frost Byte and Jeris Osage Rub! How do these products stack up on the chill factor? Read on, brothers!

As y'all probably know, I've been using menthol products almost exclusively this week... While it's all fresh in my mind, I wanted to see how these two rate in The Grand Scheme of Menthology. I'll start off by saying that both products are "up there" but neither are extreme.

The #PAA #soap called Frost Byte is awesome stuff. It lathers and performs as any PAA soap, though I've noticed that the menthol content alters the loading a bit. It's a bit "flat" with less suds forming, and a bit soft. This can be deceiving as you load (which I did slightly more than usual as a test)... Once I dropped the brush into the #GTP scuttle and whipped 'er up - the lather exploded - big time. The #BSB Shaving Brush is a lather bomb to begin with and in the end, I literally had filled the scuttle bowl!

Now for the chill, and another observation. There are two kinds of chill when it comes to shaving soap. There's a nose chill and then there's a skin chill. Frost Byte is more of the former; it smells colder than it feels. This is because of the epic amount of peppermint, and to a lesser degree, menthol. The actual chill on the skin is lower than Arctique, Vostok and Arctic Hydra. This is not a bad thing! Even casual, weekend menth-heads can enjoy this soap daily - but if you're looking for extreme, you can do better.

For the #aftershave today, I used one of the best kept shaving "secrets" - Osage Rub! Brought to you by Jeris (Clubman) of Pinaud, Bay Rum and Lilac Vegetal (among others) fame. As such, it's dirt cheap and does the job! It's not really an aftershave; more of a body splash to aid in cooling. There's really no difference - this is water, alcohol, menthol/eucalyptus and scent/dye. No skin food! So you'll have to look elsewhere for that, as well as proper scent (I used Tabac today). Regardless, between the Osage Rub and Tabac aftershave, my skin feels awesome.

As for the chill - it's chilly, but not extreme. About the same as my (faded) Vostok balm and Krampert's Finest Frostbite - but not when either are fresh. Also less chilly than Arctique (by far!) and even PAA Arctic Bay Rum which is among the coldest PAA aftershaves. The hit is brief, as with most mentholated aftershaves. It's good, it's cheap and it's plentiful - no reason not to own some!

Rounding out the hardware is my #Merkur #Futur razor fitted with a Bulgarian #PolSilver blade on shave five, IIRC. I've been using this combo all week, every day. Before moving to the PolSilvers, this really wouldn't have been possible. The #Feather and #Gillette 7 O'clock (black) blades I used to use as my go-to just ran too hot. The blade is still smooth, still super close and there's at least another few days left on 'er!﻿