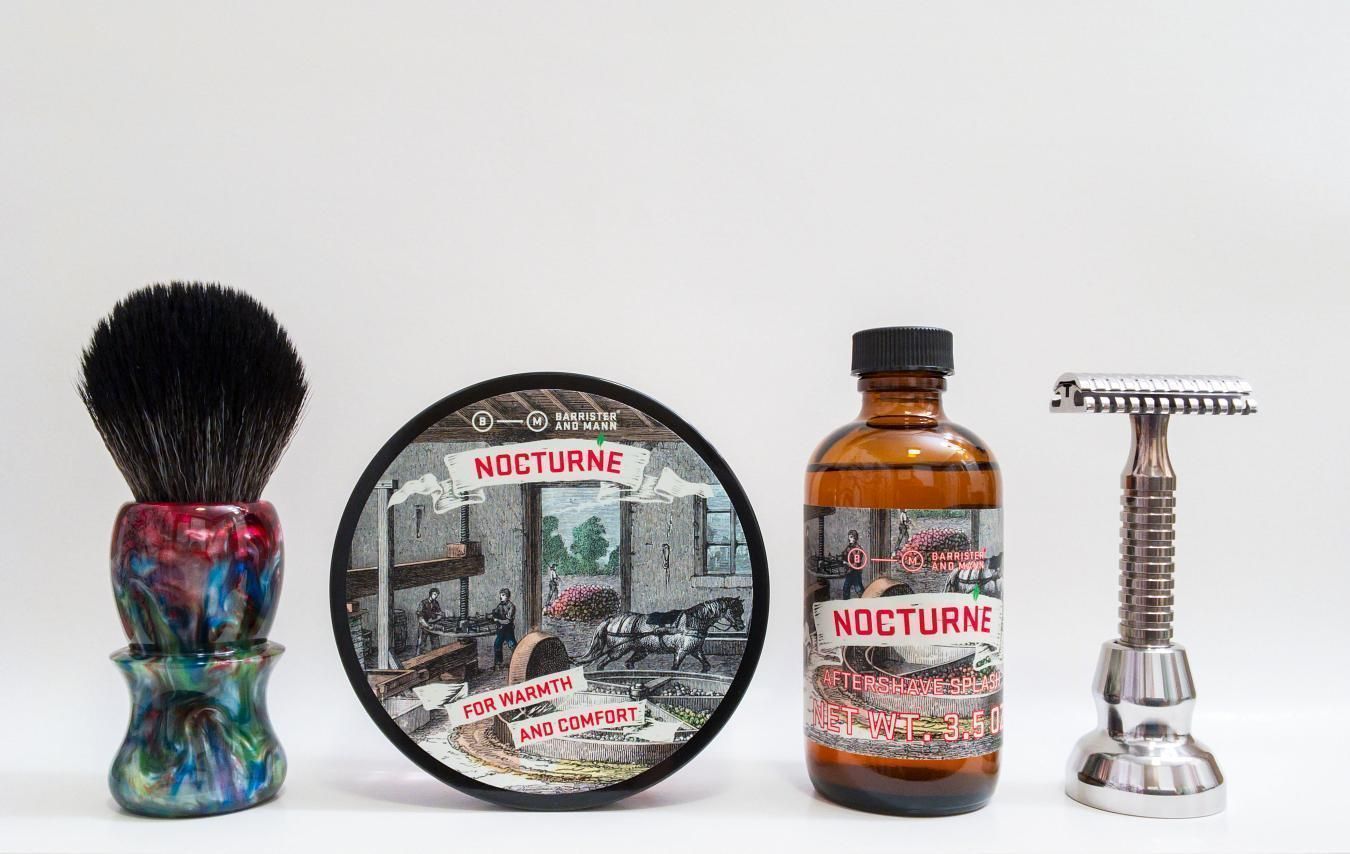 Somewhat reluctantly ringing in the coming autumn with Barrister and Mann Nocturne in a #soap and #aftershave re-release not seen since September 2013!

Anyone who’s been there will tell you that, in New England, Autumn is the best time of year. The trees turn vivid colors, the weather becomes perfectly brisk, and the apple and corn crops are harvested and made into all kinds of wonderful foods to enjoy. The scent of woodsmoke fills the air and fallen leaves litter the ground, crunching pleasantly underfoot wherever you go. It’s a wonderful time, and at the center of it all is the cider mill.

Cider mills are incredible places. The smell of apples suffuses the walls and a wood fire usually burns in the corner. Trays and trays of apple cider donuts fill the tables and counters next to carafes of hot cider and coffee. The buildings smell wonderful and we wanted to capture that smell in soap form. After long experimentation, we blended the scents of apples, newly fallen leaves, woodsmoke, benzoin, and the faintest touch of cinnamon to create a slightly smokey, faintly spicy, wonderful scent perfect for the crisp, clear days of Autumn.

A brief note first... I actually shaved with this exact combo on Saturday, and repeated it today. I didn't post Saturday's SOTD and instead left it for today. Want to know the funny part? Both times I was thinking I was using the mellower Timeless Razor with the .65mm gap... A little taken aback by the aggressive feeling and marveling at the closeness of the shaves - totally oblivious - until the open comb stared right back at me while editing the picture! LOL...

On September 4, 2018 Barrister and Mann released two soap/aftershave products; one named Leviathan and one named Nocturne. Today we look at the latter. It's your typical Glissant and Tonique bases, so I won't talk about performance today. If you need more information in that regard, click on #BarristerMann to peruse past reviews. Naturally, I've added it to the History of Barrister and Mann! Instead, let's talk about the scent.

Nocturne is actually a re-release, with the original making its debut in September 2013, which I reviewed in-depth previously. This original version generated some drama back in the day, with a few unkind words said about it. Long story short, it came down to two things; one was that it was "too smoky" (no such thing if you ask me) and the second that it caused skin reactions in some people, which is a legitimate issue. So this release is dialed way back on that front. The packaging is the latest, super robust soap tubs and classic amber aftershave bottles - though the artwork is new, and a bit different than typical Barrister and Mann fare. It's decidedly vintage, historic of sorts. Nice.

So then, what does it smell like? The official notes are apples, leaves, woodsmoke, benzoin, and cinnamon in a nutshell. The spoiler here is that this version smells largely of apples rather than smoke. But it's more complex than that. Underneath the apple top note one does detect a somewhat greener, rather than brown, leafy smell. The smoke is barely detectible, but if you search, you will find it in the background. The benzoin comes on as a middle note with its sweet, warm, balsamic vibe with a slightly spicy vanillic caramel undertone. The cinnamon is very light and adds just a hint more spice to it and sets the tone for the base. It does remind one of cider on a fall day in New England. The scent strength is a lighter medium with a short longevity of about 2 hours tops.

Nocturne takes the scents of autumn in the apple cider mill direction, rather than the warm and woodsy, somewhat spicy direction of L&L Grooming Darkfall. Of course, there's no shortage of autumn scents available. Besides the holidays, autumn probably sees the largest number of releases by artisans, followed only by spring.

Hardware for today includes the stainless #TimelessRazor in an "aggressive edition" (.95mm gap, custom dual scalloped and open comb combo baseplate) with a titanium RazoRock Halo handle and a #Permasharp blade on shave three. The brush comes to the den via #LowbornSupply and called the Lotus with a 24mm BOSS knot. Pictures do not do this handle justice; in full daylight the colors are astounding. Finally, of course, the #GTP scuttle warms the suds just right for a chilly, rainy day.

I'm ecstatic that Nocturne has made a comeback, of sorts. While I have the original, it's somewhat faded since it was new... But one can appreciate the differences, namely the reduction of smokiness. I loved the first one, as I do this one. Being a huge fan of smoke though, it was a little disappointing that it didn't come along for this re-release. Nevertheless, Nocturne is a solid scent for the coming of autumn! I dig it.