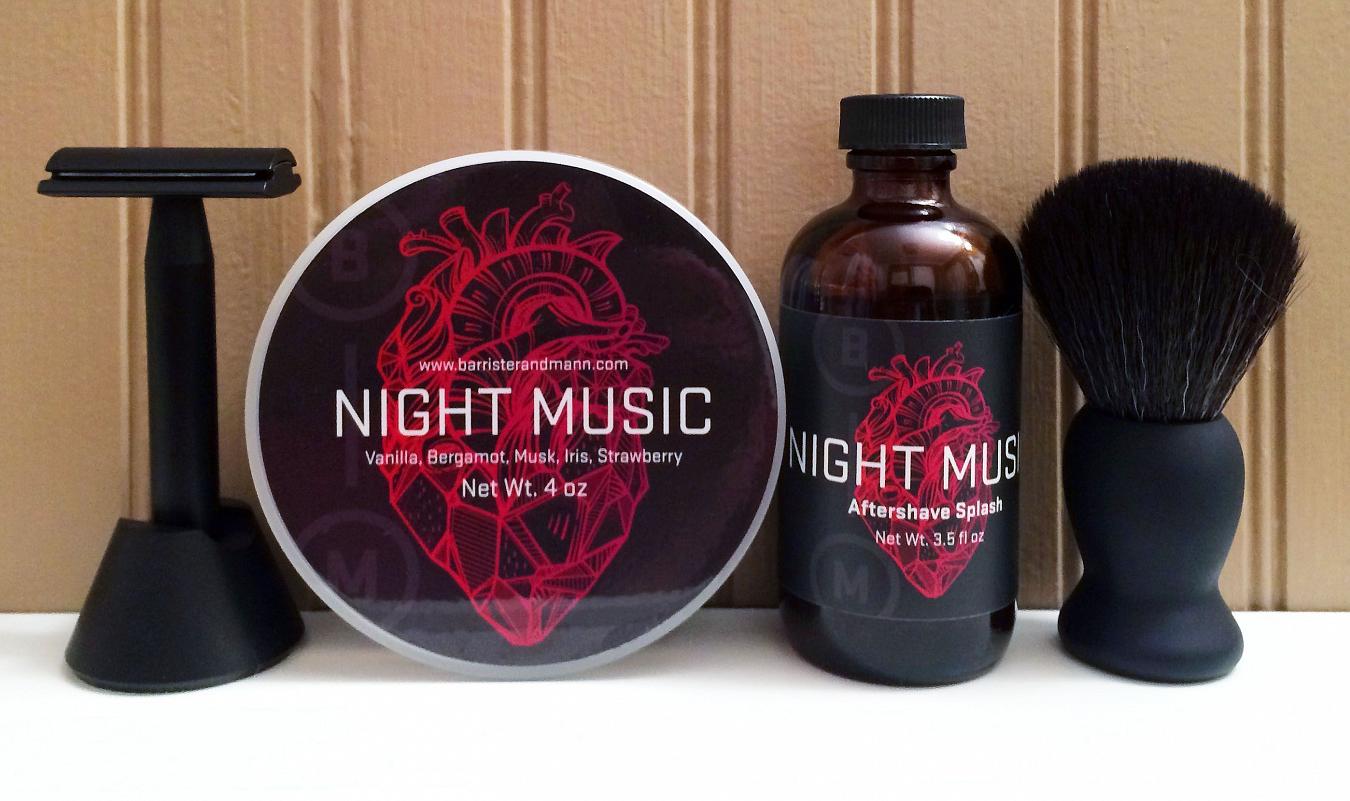 How about some unobtanium in a little black dress for today's SOTD? Featuring Barrister and Mann Night Music #soap and #aftershave! Also filed under, "this is why we can't have nice things."

I've done a particularly extensive review of Night Music before so I won't repeat too much here. The fragrance I tend to call "a sweeter, gentler Lavanille" as it's dark, yet sweet, musky and complex. Absolutely intoxicating. The soap itself was one of the early reformulations in the glissant base and therefore provides thick, creamy lather with plenty of cushion and slippery glide. This particular combo really serves to highlight what I like most about #BarristerMann - absolutely lush, complex scents that you won't find anywhere else, with an underlying software base that's just top-tier. Sadly, every time I use it - it pisses me off. Why?

Well, it's because Night Music will never return. It has been discontinued, despite a lot of fans that appreciate the scent as I do. If it has so many fans, why would it be discontinued, you might ask - and I'm glad you did... See, apparently there's a large number of goat-buggering mouth-breathers out there among us that couldn't contain their inner bitch and literally sent Will (and by extension, his mom - who inspired the scent) some truly despicable hate mail. Seriously. Apparently there are those among us that couldn't be sussed to read Will's typical, extensive scent description (unlike some, that write nebulous bullshit). No, really - check it:

As per usual, we list the biggest and most important notes on the label. Vanilla, being the sexy, rich scent that it is, shows up first and foremost in the design. This is not the sweet vanilla candy you may have smelled in the past; this is more like the dry, elegant, pure vanilla that we use in Lavanille. Underneath this creamy veneer we've incorporated bergamot, with its peppery, spicy, citrusy character, is blended in to lighten the vanilla a bit and give it some punch.

The real fun starts when we get to musk. Night Music was partially inspired by Guerlain's grand masterpiece Shalimar, so we had to make it at least a little bit dirty and raunchy in tribute to its parent. We use five different musks to turn it into the sexiest, naughtiest fragrance we've ever smelled in shaving, an homage to the civet and musks that made Guerlain's masterpiece so famous.

Iris is used to mediate the citrus and musk a bit, smoothing the assemblage out with its violet-y, silvery, elegantly powdery character and keeping the whole thing from being overwhelmingly heavy. Finally, we included just a touch of strawberry to bring a bit of fruity sweetness (as noted, the vanilla itself isn't really all that sweet). Make no mistake: this is not a strawberry-forward scent. The strawberry here is simply enough to round out any rough edges presented by the rest of the design, making it smooth, rich, elegant, and unrepentantly romantic. A holiday soap for the loveliest of holidays.

Well that explains it pretty well, no? Sadly, the hate mail #drama was largely about the scent - as people thought Will had pulled one over on them somehow. Since this is a family site, I won't repeat any of it here... Okay, not really. Suffice to say, they were really, really harsh. The same thing happened with Roam. Look, I get it. Not everyone can love every scent that comes along. I'm generally pretty easy going when it comes to scents; I appreciate each for what it is. Though there are several out there that I don't care for (oddly, the majority come from PAA). But if you know B&M, know of their passion for exotic scents that push the envelope at times and actually read the above - you should have known what to expect. And if you don't like the scent, that's okay - move on. Put it on eBay or sell it on one of the countless forums, groups, communities or sub-reddits. No harm, no foul. In fact, with B&M you'll almost surely get your money back in full, while some of the more unscrupulous turn a profit.

Just because an artisan is approachable, perhaps few as easily as Will - doesn't mean you should. Just because your new shampoo smells like your sister's ass do you send Proctor & Gamble hate mail? The majority of artisans do this because they love this little shaving thing (as we all do). It's not just a "hobby" rather it's their family business. How would you feel if one day your boss came up to you and said, "Yeah, you know that project you've worked really hard on the last couple of months? It's crap." I suspect that wouldn't go over well. This is how bad it got at times:

Well, it was more complicated than just a vocal minority. We got hate mail. Lots of it. Threats. People insulted my mother. I made the call that it was no longer worth the headache and, after receiving hundreds of messages telling me what a piece of shit I am for daring to take people's money for such a thing, I finally decided to give it the axe.

People get really upset about soap, man, and sometimes do really, REALLY stupid things. To the point that I've several times had to consider legal action, especially in the most recent case where someone attempted to frame myself and a customer of mine for supposedly organizing a smear campaign and sending death threats to a fellow manufacturer (none of which ever happened).

Anyway, I had an awesome shave today thanks to Night Music and I'm sorry if some of you found it so utterly offensive that you (inadvertently or not) caused it to be discontinued. So, thanks for that. Hardware consisted of my latest squeeze and the best match I could think of - the all-black #StandardRazors razor with a #PolSilver blade on shave two and Satin Tip #brush. The #GTP scuttle kept the chocolate mousse-like lather warm throughout. Smooth, comfortable and close.

So yeah... Think twice before you contact an artisan that's doing this not only as a business - but as a love of the pursuit. If you're one of those that perpetrated this heinousity... Consider apologizing. The rest of us Night Music fans would be extremely grateful! A shout-out to my homies, Will, Chris (TSE) and Anthony (Stallion) that inspired this little rant. Thanks for listening.

As a treat for those that read through... I spoke with Will and there will another limited release of Night Music in February 2017! This is not a rumor as I have it straight from the horse's mouth. It will be sold on the "pre-release model" that's been working extremely well for B&M for the past year or so - and come with ample warning... This is exciting news!

In fact, Nocturne might make a comeback as well as Saeryan and some others. See the full status in The History of Barrister and Mann.