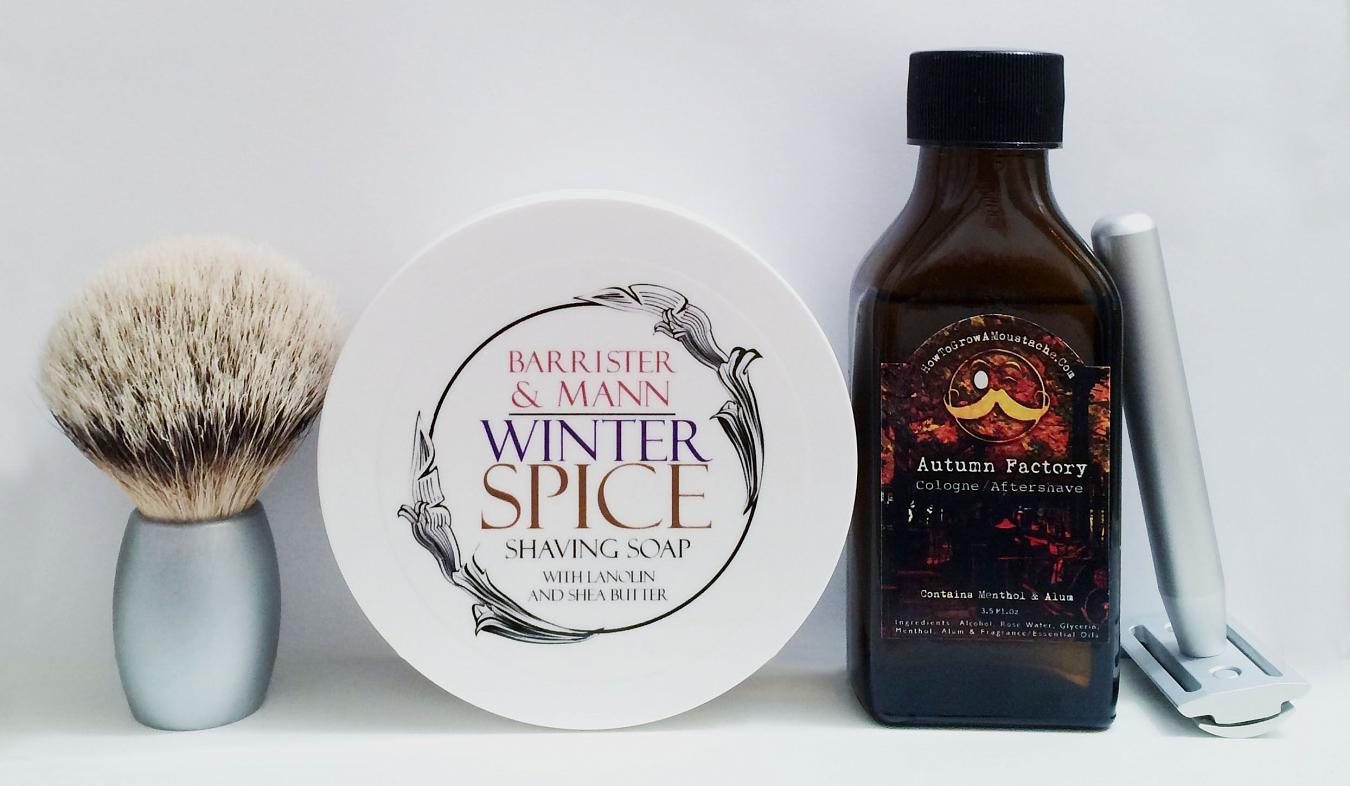 My sixth in a series of SOTD as part of #BarristerWeek where I use a discontinued flavor. Today we have Barrister and Mann Winter Spice #soap and HTGAM Autumn Factory #aftershave!

A cozy, rich fragrance with top notes of sweet orange and amaretto bolstered by the warmth of cinnamon. Perfect for that cold winter's night when you just have to shave.

This SOTD has warning signs, bells and buzzers for anyone with allergies and/or sensitivities... The soap contains almond, cinnamon and lanolin - the aftershave contains cinnamon and other spices. In fact, the sensitivity issue is a large part of what lead to the demise of Winter Spice unfortunately. The scent of both products are all about autumn though... Winter Spice smells just like you might imagine; mainly cinnamon forward but blended with orange and amaretto to add complexity and round out the scent. Autumn Factory is similar, with top notes of nutmeg, clove, cinnamon, peppercorn, ginger, vanilla with base notes of benzoin, helichrysum and rosewater. Basically, if you're not a cinnamon fan, neither of these products will appeal to you because that's the overriding theme. Scent strength on Winter Spice is on the healthy side of medium while Autumn Factory cranks it up to eleven.

When I first started shaving and was more into #PAA products (then HTGAM), I thought alum was a nice thing to have in an aftershave. As I tried more and more higher-end products that didn't contain it, I realized that it's perhaps not [always] the best choice. It tends to leave your skin feeling a bit dry and tight, just like an alum block. I prefer products that are more nourishing and moisturizing feeling, especially in the cooler months when the air is rather dry to begin with. Unfortunately for PAA, it's part of the base formula for nearly every aftershave they make. Nevertheless, it's nice to come back to them as some of the scents really are lovely, and this is one of them. It's not quite as complex as it sounds, but there's no denying its autumn-ness and it's a perfect follow up for Winter Spice. It's also one of the few aftershaves remaining at the original, reasonable price of $19.95. Most are $24.95 now, which is just not worth it.

Hardware for today's deed fell to the #StandardRazors razor which was on shave two of the #PolSilver blade while the #Dovo silvertip badger brush mixed up the pungent suds in the #GTP scuttle.

An awesome autumnal/holiday shave with an overriding abundance of cinnamon. Not for the faint of heart, but oh so decadent, lovely and all around spicy. I very much enjoyed it, and look forward to repeating this shave now that the season is upon us.