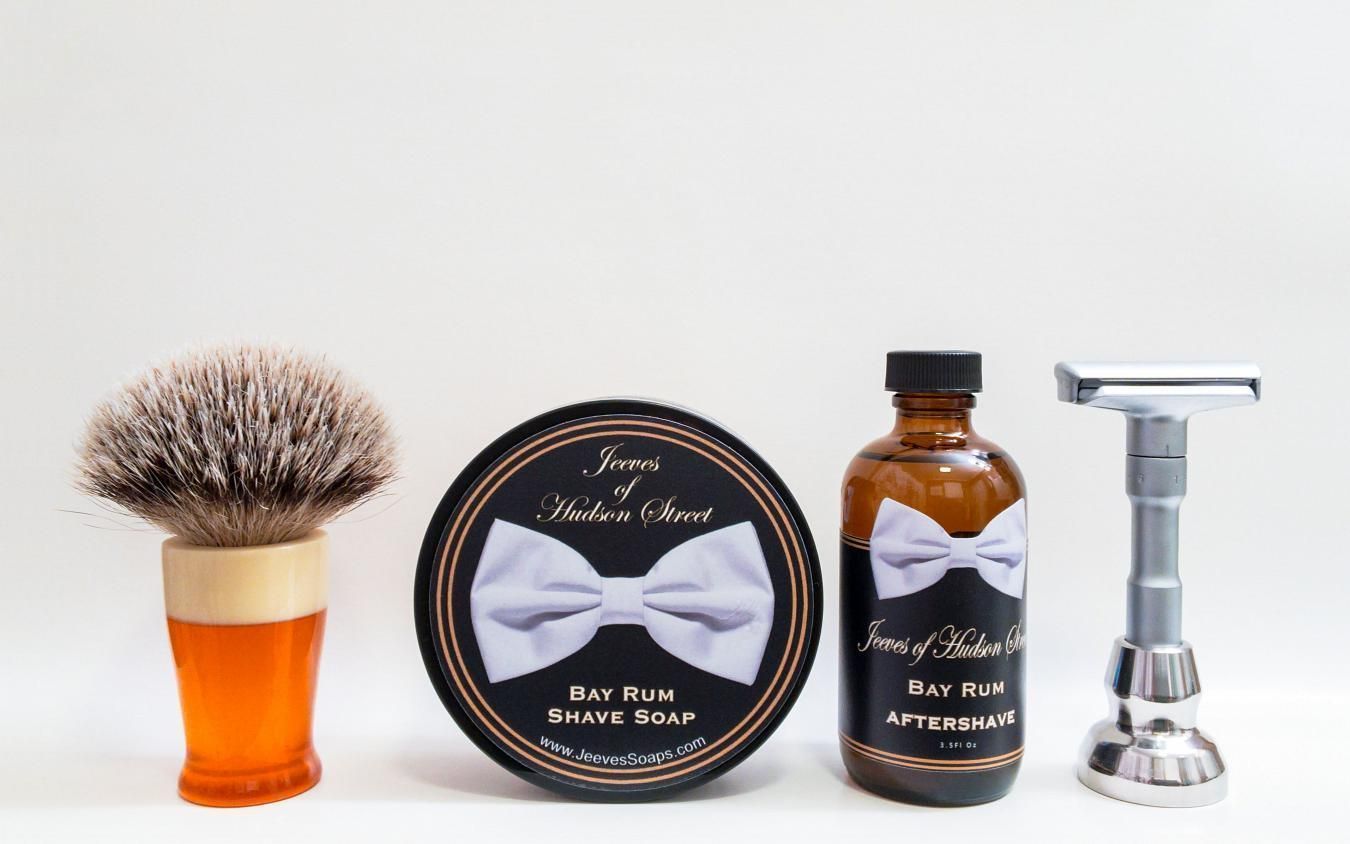 Fourth day of #JeevesWeek with an older release from Jeeves of Hudson Street called Bay Rum in a matching #soap and #aftershave!

Bay Rum is one of those scents that takes you back to days of gentlemanly intrigue. When a distinguished man wanted to make an impression, the exotic nature of the West Indies bay and the sweetness of the classic rum made people wonder if you were wealthy or a swashbuckling sailor. Toss in a spritz of sweet orange and just a touch of patchouli and vanilla to blend this sweet and sophisticated aroma together.

I'm going to, over the course of the next week, go through each product available from Jeeves of Hudson Street. In case you missed the earlier review of Zulu Foxtrot Golf (military parlance for "ZFG" or "Zero Fucks Given") or Abyss check those out. Unlike the previous Zulu Foxtrot Golf and Abyss you'll note the older branding of Bay Rum. Same ingredients though.

So how's the scent? Officially, Bay Rum has notes of bay leaf, jasmine, rum, citrus and spice (including clove). When I first sniffed the tub (remember, only marginally useful) and later the aftershave in a test dab on my hand... I thought, "hmmm." It's billed as a bay rum, but clearly doesn't beat you over the head by shouting, "I'm a BAY RUM!" It's sort of a "not bay rum" like Tallow + Steel West Indies or Chatillon Lux Blackberry Blossom Bay - but not quite as far off course. Recall that I said #JeevesSoaps scents all have "an air of a good cologne about them." This Bay Rum is no exception.

It's unmistakably a bay rum, thanks to the obvious inclusion of bay leaf (pimenta racemosa) along with all the usual suspects (rum, a token citrus and a variety of "spice") but the inclusion of jasmine adds a subtle sweetness to it overall that really mellows it out and takes out all the harshness some bay rums have. And don't worry about the inclusion of clove; it's very, very subtle. I think this is a beautiful, more "grown up" sort of bay rum. Think of it as one for the fans, but wearable in mixed company... It's an elegant bay rum.

Hardware for today's deed came down to the #Merkur #Futur razor with a #PolSilver on shave four. I wanted mild, yet decidedly efficient today... And nothing quite nails it like this razor. Have I mentioned lately that I love this thing? So much so that I have a brand new spare waiting in the wings for, you know, the shaving apocalypse. The brush is an inimitable #ThatDarnRob piece with a 20mm silvertip badger knot (that's more like a 22mm and in a 24mm hole). It certainly feels like a 22-24mm knot; it's a bushy sucker, and oh-so-plush. The #GTP scuttle (obviously) played its part again today.

A beautiful Friday shave, gang! I have to say, I really love this Bay Rum from Jeeves of Hudson Street. It's got all the right pieces that make it unmistakably bay rum, yet it's refined, elegant and subtle. You can wear this out anywhere, and it'll go the distance - also unlike most bay rums. Expect at least six hours and then some. Another great feature of this artisan's offerings, besides the great performance and value - is the excellent longevity of the scents.