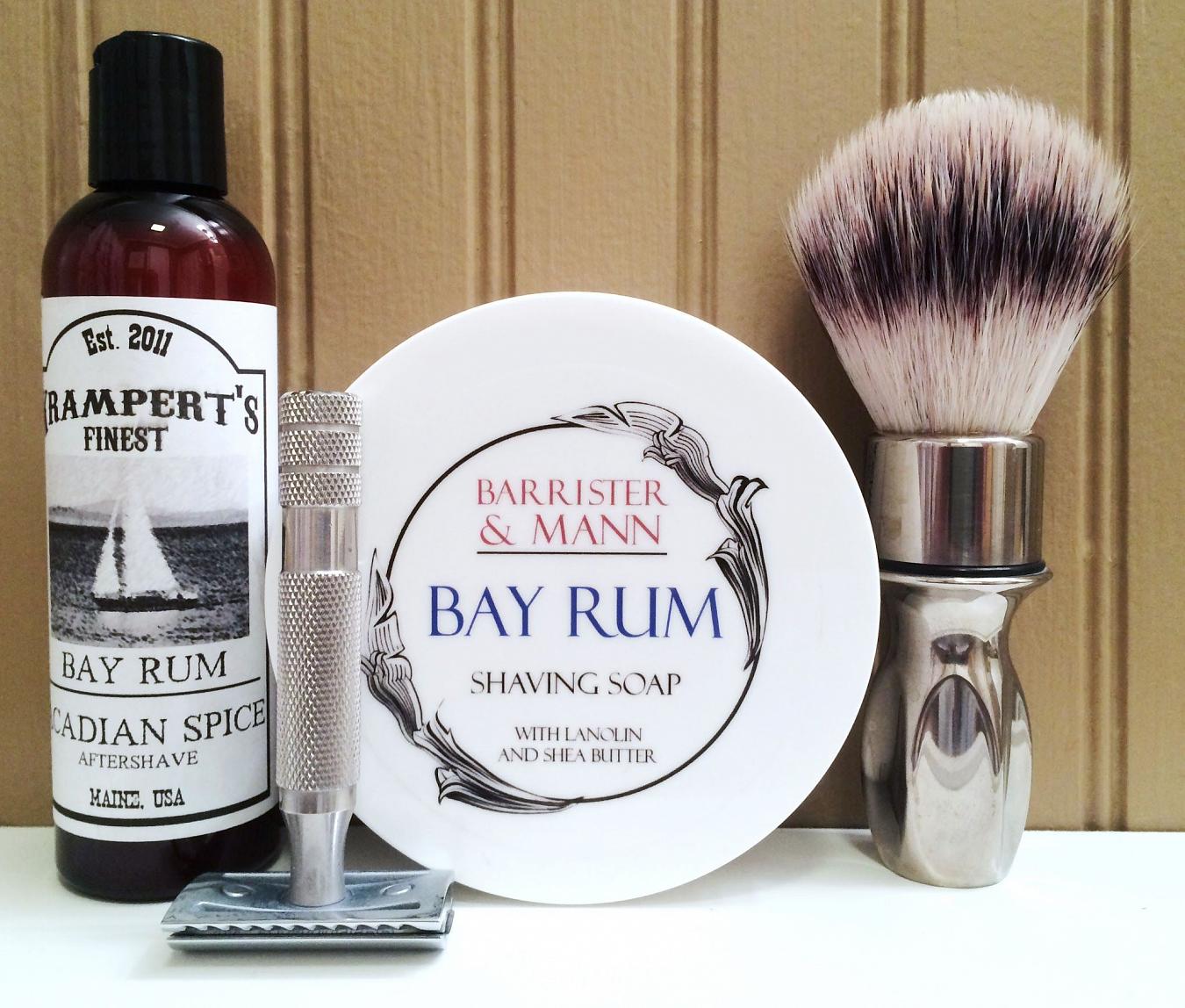 Happy FriBay everyone! This SOTD is brought to you by Barrister and Mann Bay Rum #soap and Krampert's Finest Bay Rum Acadian Spice #aftershave!

Who doesn't love the classic men's scent of bay rum? Just about everyone has done a take on it, and in this case, B&M and Krampert's Finest are no exceptions. Most all bay rums derive their scent from rum (or alcohol) and West Indie Bay (pimenta racemosa), which has been in extremely short supply for a while now and has gotten exorbitantly expensive. The Bay Rum soap has some unique "hooks" in the scent that make it stand out (for example, Dr. Jon's Anne Bonny which has black tea and lime notes) and has additional notes of sweet orange, benzoin and just a hint of cinnamon. It smells super lovely and is just ever so slightly unique with a sweeter (orange) warmth (vanilla) over common bay rum scents. The use of Whaler's Black Strap Rum adds just a hint of licorice and molasses. Bay Rum Acadian Spice is a little less adventurous, but does have a spicy component to it. None of these bay rum products contain clove... Most of the time it's pimenta racemosa that you smell, which strongly resembles it. The soap is about a medium scent strength with the aftershave a bit stronger. The latter doesn't last too long; mostly a skin scent on dry down.

The Bay Rum soap is a classic, permanent member of the B&M lineup, but because of other projects and the current crisis with obtaining pimenta racemosa oils, it will be the last to be moved to the new glissant formulation and packaging (like you may have seen with Cologne Russe recently). Also in the works is a matching Tonique splash. Initially it was to happen in September, but that's optimistic - and even if it does, quantities may be severely limited.

In any event, the performance is classic B&M "white label" which was the standard pre-glissant. It produces copious amounts of rich, creamy lather with excellent cushion and good glide. The resulting face feel is also excellent. The glissant formulation mainly amps up the glide, especially secondary lubricity for touchups and multiple strokes on a pass - as well as face feel. But do not let that stop you from obtaining a tub of Bay Rum as it's excellent stuff no matter how you look at it, and with the re-release being iffy...

The Bay Rum Acadian Spice aftershave was Krampert's Finest first product (before the Frostbite came out) and what made the brand popular. It's nice stuff; with witch hazel, alcohols (isopropyl, ethyl and propoxylated), vegetable glycerine and both natural scent and color from spices - it has basic ingredients that work quite well.

Hardware today was the #Mühle R89 razor with a #Feather blade fitted on shave three, with my go-to #BSB Shaving Brush doing the business in the #GTP scuttle.

A super-duper bay rum shave today, gents! While neither the Bay Rum soap nor the Bay Rum Acadian Spice scents are really that unique among the many bay rum products out there... Both are excellent performers! If you're a fan, you can confidently grab both of them for your den.