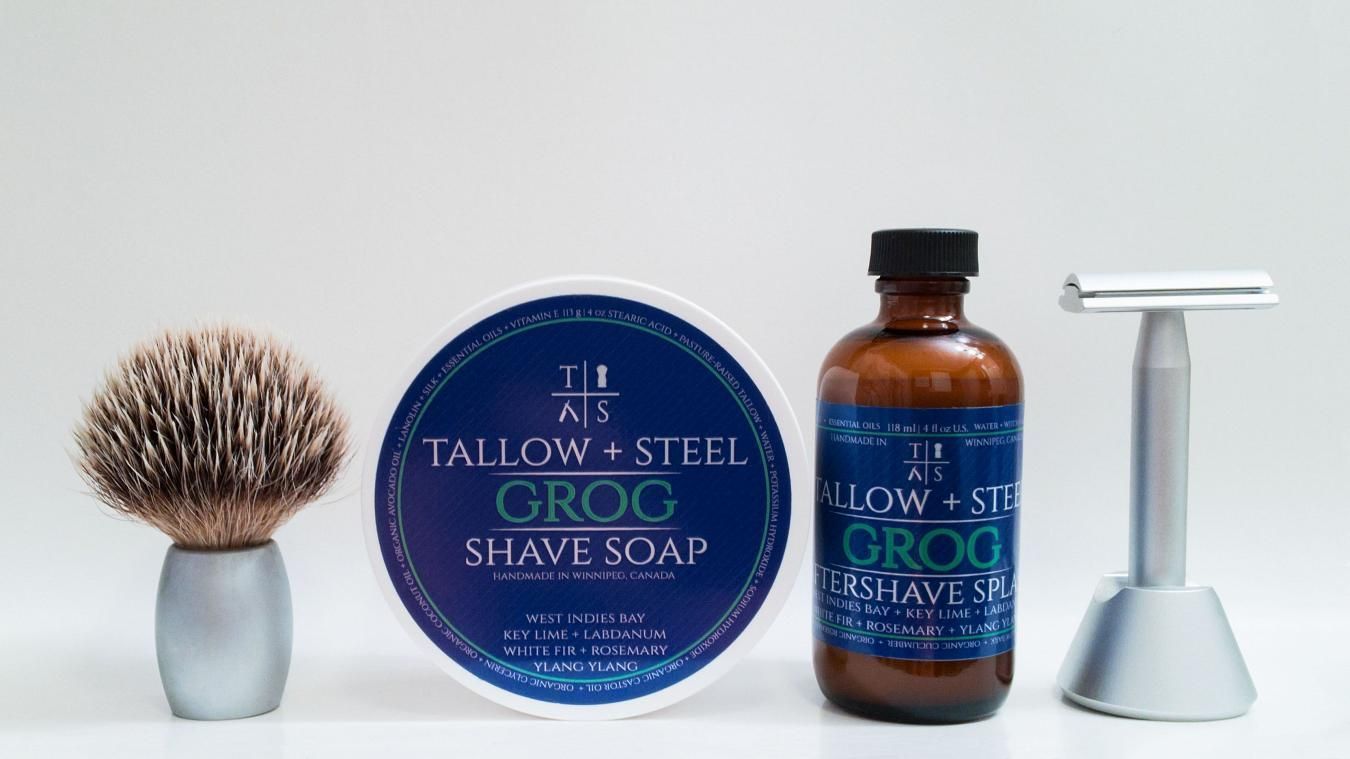 Hoist yer colors and come along a broadsides, ye salty seadogs! Happy belated #HumpBay with Grog by Tallow + Steel in the form of #soap and #aftershave!

Grog is a unique scent built on a classic bay rum. Real West Indies bay is accompanied by key lime, sweet balsamic notes and subtle herbs. In the 1700's British Vice Admiral Edward Vernon introduced a drink to the Royal Navy made of rum and citrus, often with the addition of herb and spices. It was named Grog, and perhaps this is what it smelled like. But probably not.

I won't cover the performance of the soap and aftershave, as I've covered that fairly extensively in my Tallow + Steel First Impression a while back as well as my review of Dark, review of Rainforest and just a couple of days ago, my review of Shag. Suffice to say, it's outstanding on all fronts as the metrics above show.

It might be easy to jump to the conclusion that the scent of Grog is just another bay rum. Yes, it's inspired by - and shares notes from it - but is a whole different beast. Reminiscent, but totally different... And smells fantastic. I truly hope Ryan reconsiders and at least brings this scent back into the new line up. But for now, it's unobtainium status is just below that of Shag. And that's a shame.

At any rate, it has notes of West Indies bay, key lime, labdanum, white fir, rosemary and ylang ylang. At first whiff, it certainly recalls a bay rum (thanks to, um, the bay - and lime) but gets much more complex and "generally acceptable to the public at large" as a more... Subtle fragrance. The labdanum smells resionous, almost terpenic with a pine like opening, and then transitions into a warm, kind of leathery scent with hints of pepper, tar, coffee or light tobacco... The white fir gives it a bit of a kick, complemented by the rosemary which shifts things a bit into the herbal. Finally, the ylang ylang gives it a sweeter, more floral vibe. Think of it as a bay rum open with a warm, herbaceous and floral accord on the back end. It's masterfully blended and smells great. Longevity is impressive, lasting many hours; the sillage is quite decent for the first hour or so.

The choice of hardware for today was the raw #StandardRazors razor with a fresh #PolSilver blade and the brush was a no-brainer as I went for the matching #Dovo silvertip badger hair. The #GTP scuttle made for an ideal place to whip up the ensuing lather. Not as aggressive as the R41 yet way more effective than the 23C - this razor falls in between. It's the one I use the most, honestly. Simple, effective, light and maneuverable.

Great software, great hardware. It all came together for a really nice shave today... But the star of the show is Grog which, like I said, smells fantastic. It's got a good scent strength in the tub and jar, better than average longevity and reasonable sillage. Of course, it also goes without saying that the performance of the products is outstanding. You can't go wrong with #tallowandsteel on that front. I eagerly await the revised line up; I can't imagine how much better it can be and there's a bunch of new scents coming along for the ride.