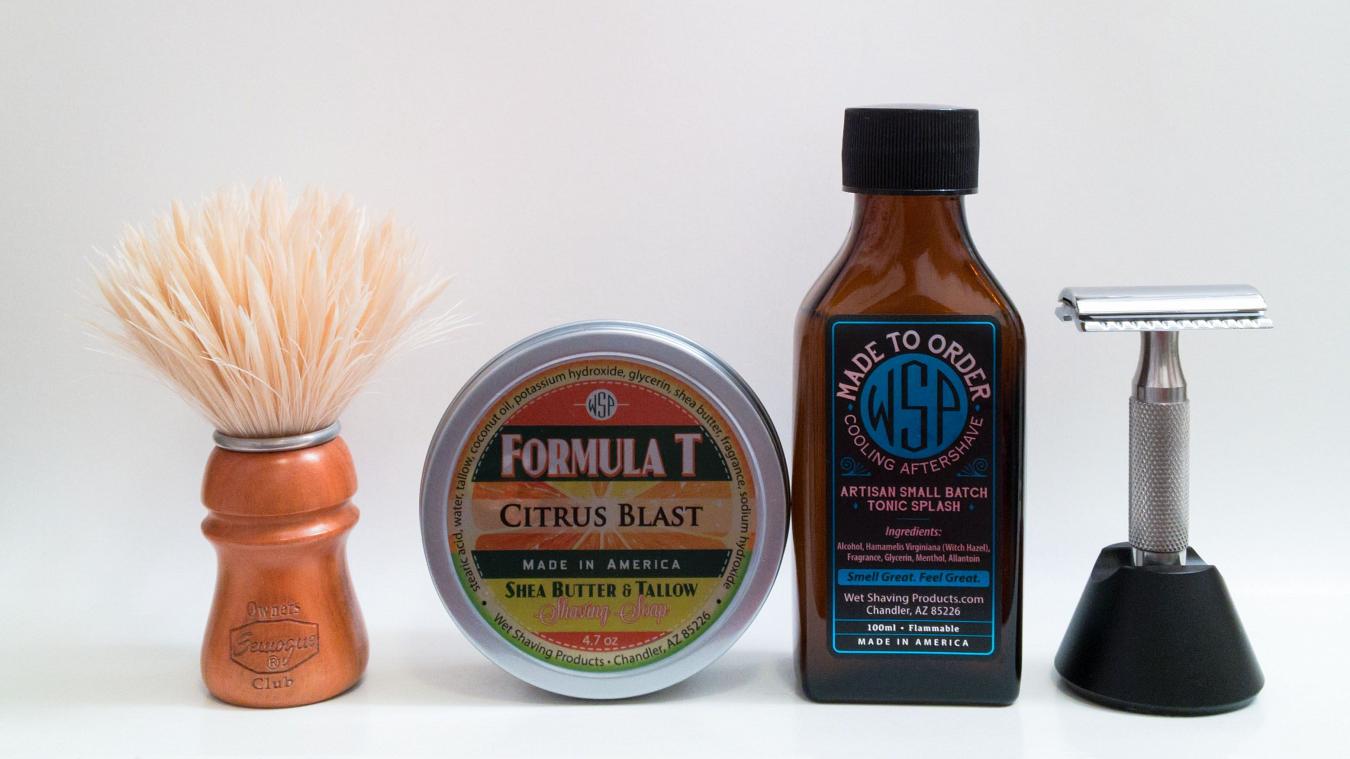 Celebrate the warmer weather with this quintessential variety of citrus scents! Wet Shaving Products Citrus Blast #soap and #aftershave includes just about all of them... And then some.

I've been eying Citrus Blast since it made its debut in the Formula T version last year... But as they say, "he who waffles, loses." Okay, so nobody actually says that. But in shavedom it's very much true - especially on limited runs, as this one was. Well, it would appear that the demand (and demands) were enough for Lee to produce another batch of 48 (possibly 100) tins. This time, I jumped on it, and picked up a matching aftershave splash (with added menthol). I'm a sucker for citrus scents - especially these mega-mashups. There are several out there, including Through the Fire Fine Craft Sucker Punch, Chiseled Face Santa Paula Citrus and Dr Jon's Hydra to name a few (all of which I've reviewed - see links).

I had high hopes for Citrus Blast going in, as it promises more than just a straightforward citrus mash up (more like Hydra in that sense) and more of the various types (unlike Santa Paula Citrus which is mostly orange). In fact, it has top notes of lemon, lime and orange, middle notes of strawberry, black currant and jasmine, with a sandalwood base. Sounds pretty awesome, if you ask me - and it is, but...

I get more of the strawberry, black current and jasmine forward, which is "surrounded by mild citrus" (as opposed to the other way around). It's sweet with a distinct berry lean. Don't get me wrong, I think it's great - and love it exactly as it is... Because if there's one thing I enjoy more than citrus, it's berries. But if you're looking for a straight up citrus blast to the face - this is not for you. I was a little disappointed that the citrus wasn't more prevalent, or the scent stronger overall. Not exactly a "blast" as the scent strength is a medium or so at best; the aftershave is hard to pin down, thanks to the included menthol (which overpowers it initially). Longevity is also fairly brief though it's not the artisan's fault... As you're probably aware and heard me say countless times, citrus is one of the most fleeting, volatile of notes. I get about two hours tops and the sandalwood is almost undetectable throughout, let alone on the base.

Hardware for today was the #Merkur #23c razor with a #Feather blade on shave four, while the prescribed (and suggested) brush was the #SOC - whipping up the lather in the #GTP scuttle. I think the recent renaissance period of this head has, for me, come to an end. It shaves great, it's drama free... But it's just a bit too mild, causing some spots under the chin that it just doesn't catch. Again and again, mild razors reinforce my preference for more aggressive (efficient) razors - though they can be harsh as daily drivers, if too much so. At any rate, a lovely shave.

To recap, I love the scent - it smells fantastic! That said, it's not as citrusy as you might expect (given the name especially) and they're not even the dominant notes. The base of sandalwood is MIA and overall longevity just isn't there. Expect to layer another scent for the day. Regardless, pro- and post-shave you're in for a treat, as this is a great summer combo and you certainly won't be disappointed (as long as you consider the aforementioned cons). For what it's worth, none of the other citrus products I've reviewed last any longer or smell any stronger - perhaps with the exception of Sucker Punch which is quite... Robust! If you can overlook some shortcomings, Citrus Blast is a great scent and recommended for the fans.