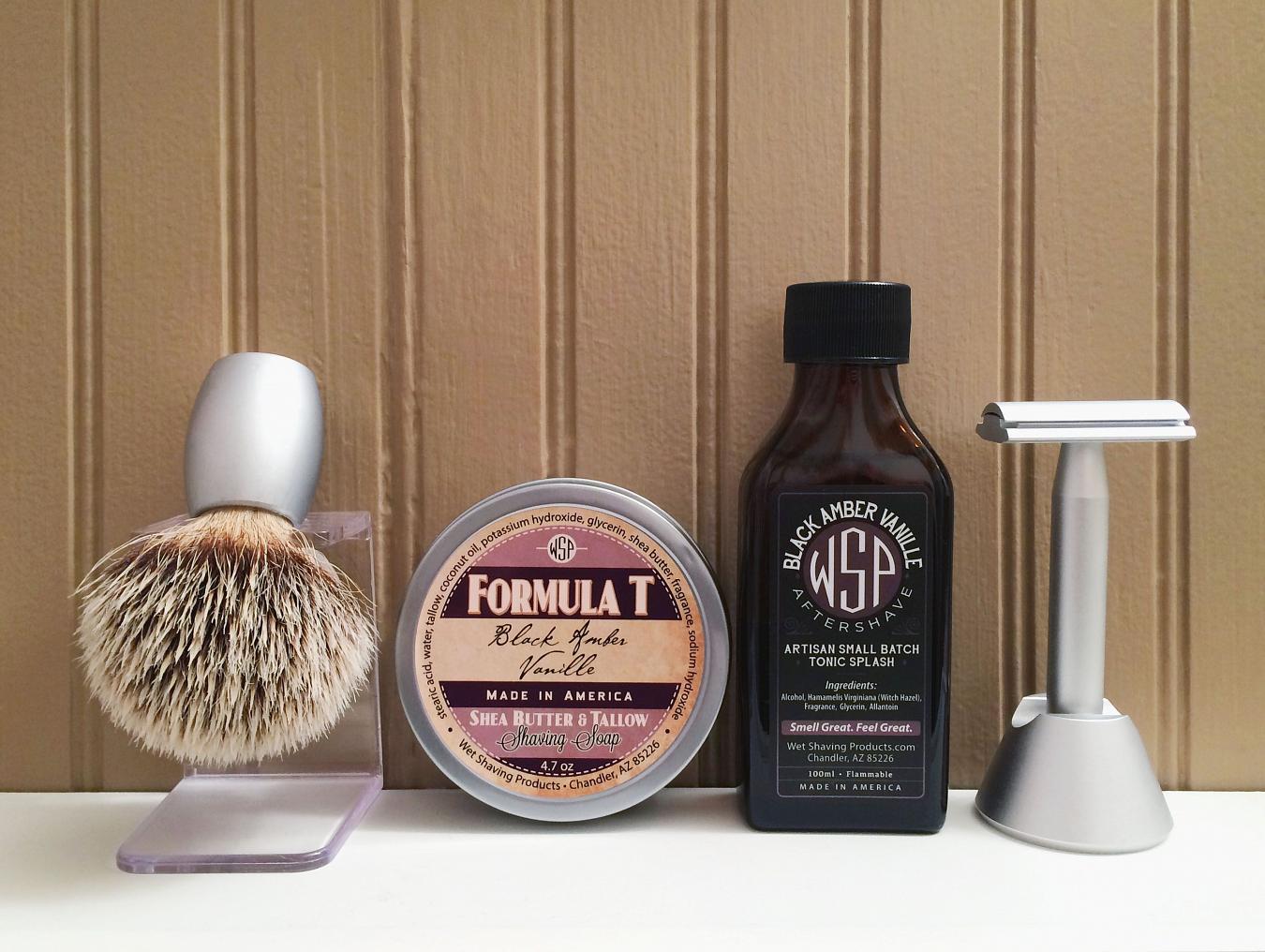 What smells better than vanilla, amber, myrrh or musk? Why, the combination of all four in the sexiness that is Wet Shaving Products Black Amber Vanille in a #soap and #aftershave combo!

My regular readers will know that I'm a huge fan of vanilla in all its forms. For example, Vanille by Barrister and Mann or Lavanille for example - but it doesn't stop there. In fact, I've done a lot of vanilla reviews (the scent, not the reviews themselves). I also enjoy amber and musk a great deal. So it should come as no surprise that I picked up this combo... It spoke to me.

I've been loosely following #wsp_shaving for quite some time now, actually. The problem was, I never really committed to buying as I didn't want to introduce another artisan for fear I'd get hooked and start collecting even more. I came really close last September when the Citrus Blast scent was announced in a limited run in the Formula T (tallow) base. I waffled too long, and it sold out. Fortunately, Lee will release another batch within two weeks or so! But what triggered this was when I randomly went to the WSP site the other day and saw Black Amber Vanille listed! Of course, it too was sold out... I remembered that Pasteur Pharmacy had just recently posted a picture that they got in an order of WSP goodies, checked, and it was among them! So without delay I hoofed it over there and secured my combo. As with Citrus Blast I think Black Amber Vanille should be full time offerings. A brief note on Formula T soap:

Formula T is not for the feint of heart. Compared to my rustic line, the tallow imparts more cushioning & moisturizing properties. It is also more dense, weighing in at 4.7 vs 4.4 ounces.

First, the scent. Officially, it has notes of vanilla, combined with a rustic amber and rounded out with black myrrh and a splash of Egyptian musk. Oh, hell yeah. That's all the good stuff with one giant check mark. Let me tell you, it smells exactly as you might imagine it. The primary note is vanilla with a healthy amber vibe from top to bottom. In fact, the scent doesn't change much as it dries down. The black myrrh and Egyptian musk definitely round things out and add complexity. Just enough; there's a musky spice lurking beneath the vanilla. It smells decadent, manly - divine. More of an evening scent than a daily office wear, certainly. The scent strength is medium-strong. More so the aftershave than the soap, but both are solid. Longevity is excellent and I easily get the stated 6-8 hours. This is some sexy shit.

Performance-wise, the soap is very nice indeed! While I wouldn't put it in the top tier, it's definitely above the status quo and belies its price point of $14.99 a tin. The value is even greater because you get 4.7 ounces of soap and it's purportedly "extra dense" through a "long curing process, eliminating as much water as possible." This seems to hold true; it's fairly firm (yet easy to load). With my usual 25-30s (30s here) of loading, the soap produced ample, cushiony lather that was fairly creamy with excellent glide and very good secondary lubricity. I noticed how slick it was when rinsing my hand before the first pass... I knew it would rock. Really, the only place the soap comes up short compared to the top tier is in face food ingredients.

The aftershave tonic is fairly simple also, containing only alcohol, witch hazel, fragrance, glycerin and allantoin. The price of $17.99 for 100ml is fair, however - as there's an abundance of fragrance, which lasts. On application, there's a nice alcohol burn - and after subsiding, leaves your face feeling fantastic; supple yet not tacky. As with the soap, there's not a lot of skin food. However, between the two I have zero complaints about how my face feels after the shave. I might think twice in the winter (where I go so far as to prefer balms) but even there, it shouldn't pose any sort of issue.

The packaging is fairly standard, but well done. No surprises on the slightly tall, yet narrow soap tin - or the amber aftershave bottles. The artwork is subtle, professional and the branding standardized. The labels are waterproof and applied perfectly. I don't understand why so many artisans struggle with this, but WSP nailed it - and again, falls right in line with the price point. It almost seems quaint to have a tin these days instead of a plastic tub, but I like them. It's filled to capacity with no room for loading so it gets a bit messy though. Yes, they can get dented, but unlike some folks I won't bug out if it does. A tin is the smallest, lightest yet stable container a soap can come in.

For the hardware today I decided to dust off my raw colored #StandardRazors razor with a fresh #PolSilver blade installed. While I've been enjoying using my first razor of late, let's face it - I prefer my aggressive razors. It did not disappoint, giving me a very nice, close shave. The #Dovo silvertip badger brush was a natural choice because of the small size of the tin, with no room to load. It fit perfectly and loaded up nicely - further whipping up the goodness in the #GTP scuttle.

I have to say, WSP Formula T soap doesn't get enough air time. It's an excellent performer - as is the aftershave. While it doesn't compete against the top tier, the pricing is very much on point, with the value boosted by the quantity and density of the soap - and the strength and longevity of the scent. I'd definitely recommend giving this software a try. While I haven't tried the regular Rustic line (yet) I suspect it's probably very nice as well. I just prefer tallow bases, and that's where I'll focus my future acquisitions... Oh yeah, I'm getting more. Just as I feared I might. But I don't mind - it seems like good stuff!