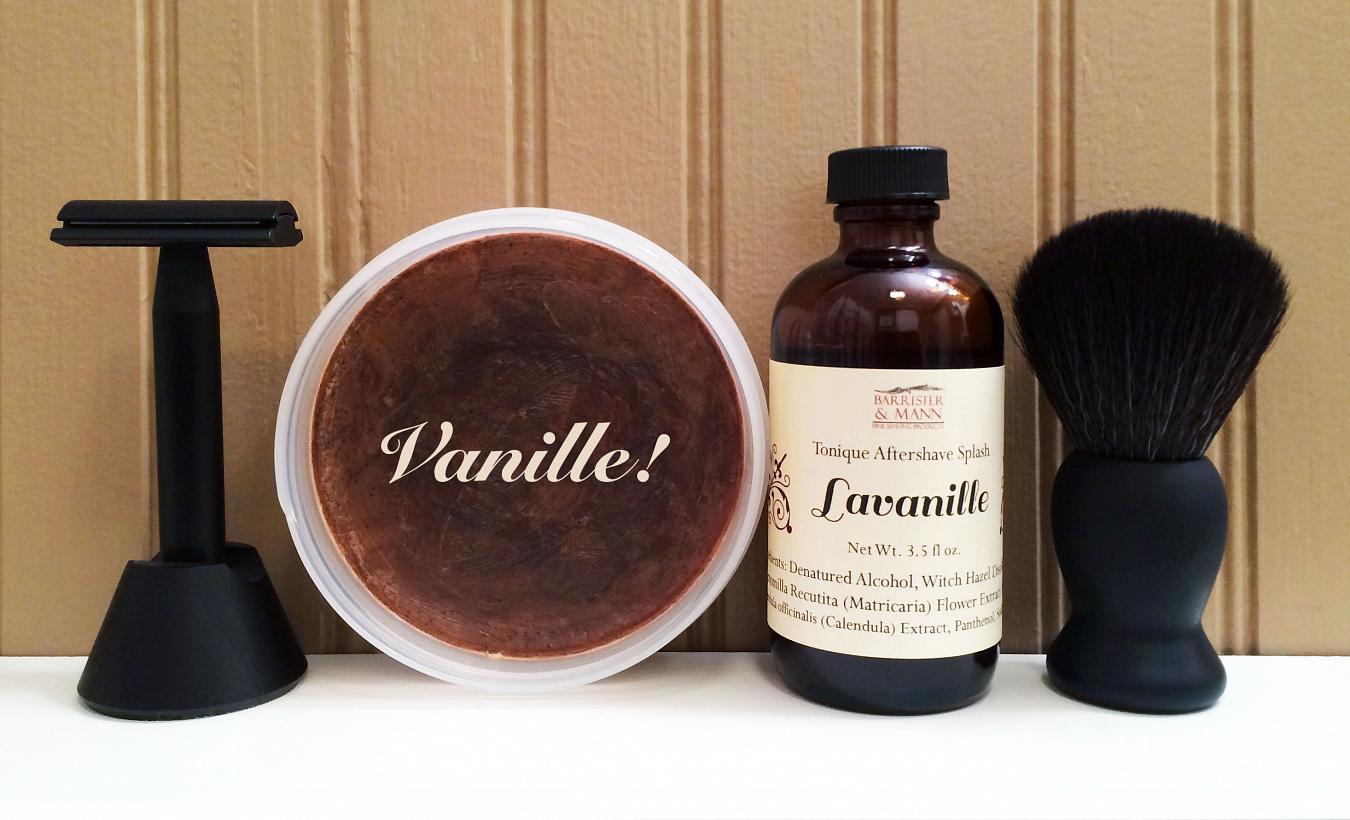 My precious... I got a hold of perhaps the best example of Barrister and Mann unobtainium #soap called simply, Vanille! For the #aftershave I went with, what else, Lavanille...

I'll start off by saying that I'm a yuuuge fan of vanilla scents. One of my favorites, it perhaps goes without saying then - is #BarristerMann Lavanille soap and aftershave. But there exists a soap so rare, that it has been classified unobtanium by the collective. The first batch was announced at 5am on February 1, 2014 and by 10:30am that same morning - it was gone. It went for $18 for a 3.75oz tub and appeared so very briefly on the B&M site:

We thus bring you the limited-production Vanille, scented with a combination of real bourbon vanilla absolute and the richly vanillic and woody resin styrax benzoin. Together, the oils combine to produce the most gorgeous vanilla scent in shaving today, a voluptuous, elegant, and deeply sensual fragrance that will remind your date of the meaning of desire. Only 36 pieces of Vanille have been made. Don't wait to get yours.

The second batch of 40 tubs was produced as a single run in June, 2016 for a bunch of people that got together and petitioned Will over on Facebook and went for $40 for a 4oz. tub, sans label. Unlike the first batch, it contained only the bourbon vanilla absolute (no styrax benzoine) and was stronger in scent. All but seven of the tubs were in the glissant formulation - those were in the "white label" formula. It didn't work out so well in the end, and will therefore be the last produced:

...was done for a bunch of guys on Facebook and RAPIDLY grew out of hand. It was originally only supposed to be 14 soaps, owing largely to the fact that vanilla absolute is now even MORE expensive than it was when Vanille was originally released ($150/ounce, and we need one ounce per 7-8 soaps).

All in all, there are only 76 tubs of Vanille out there... A scant few tubs and definitely deserving of the unobtainium classification. Let's look at where we are today with the cost... One ounce of bourbon vanilla absolute is about $600. Assuming a best case of eight tubs, that's $75 just in absolute each, and that doesn't include the actual soap itself or the tub it comes in. Now you can see why it's just not feasible (economically) for there to be more made... It would go for no less than $85-90 a tub easily.

Now onto the scent. It's vanilla, the whole vanilla and nuthin' but the vanilla. It's like Lavanille without the riff raff and dialed up to eleven. It's easily the most intense, rich and deep vanilla scented anything I've ever smelled. Even vanilla extract (used in cooking/baking) isn't anywhere near this level of intensity (and not nearly as concentrated anyway). If you're a fan of vanilla like I am, this is definitely the ultimate vanilla that's unadulterated. Now, you might be thinking, are you missing anything, "slumming it" with Lavanille? I dare say, no - not really. It's readily available as a regular offering from B&M and at a much more approachable price point. So unless you're a collector of B&M or a real fan of vanilla (I'm actually both) then you should probably take the less painful way out. Since there was never a matching Vanille aftershave, I went with Lavanille instead. I won't bore you with performance on either product; it's good. Damn good. Besides, I've reviewed Lavanille quite a bit.

Hardware today consisted of the black #StandardRazors razor with a fresh #PolSilver blade and the matching Satin Tip brush whipped up the decadence in the #GTP scuttle. Seemed only appropriate, somehow. Smooth, comfortable shave all around.

Wow. So I finally got my tub, gave it a go - and yeah... It's all that and then some. But like I said, unless you're a little crazy like me - just get yourself some Lavanille and be happy. You can buy it all day long at a price that's much, much more affordable - and it's not necessarily that much different to the weak of nose. In fact, you'll probably like it better as it's a more complex scent and not "just vanilla." No, this is a soap for real fans of it.