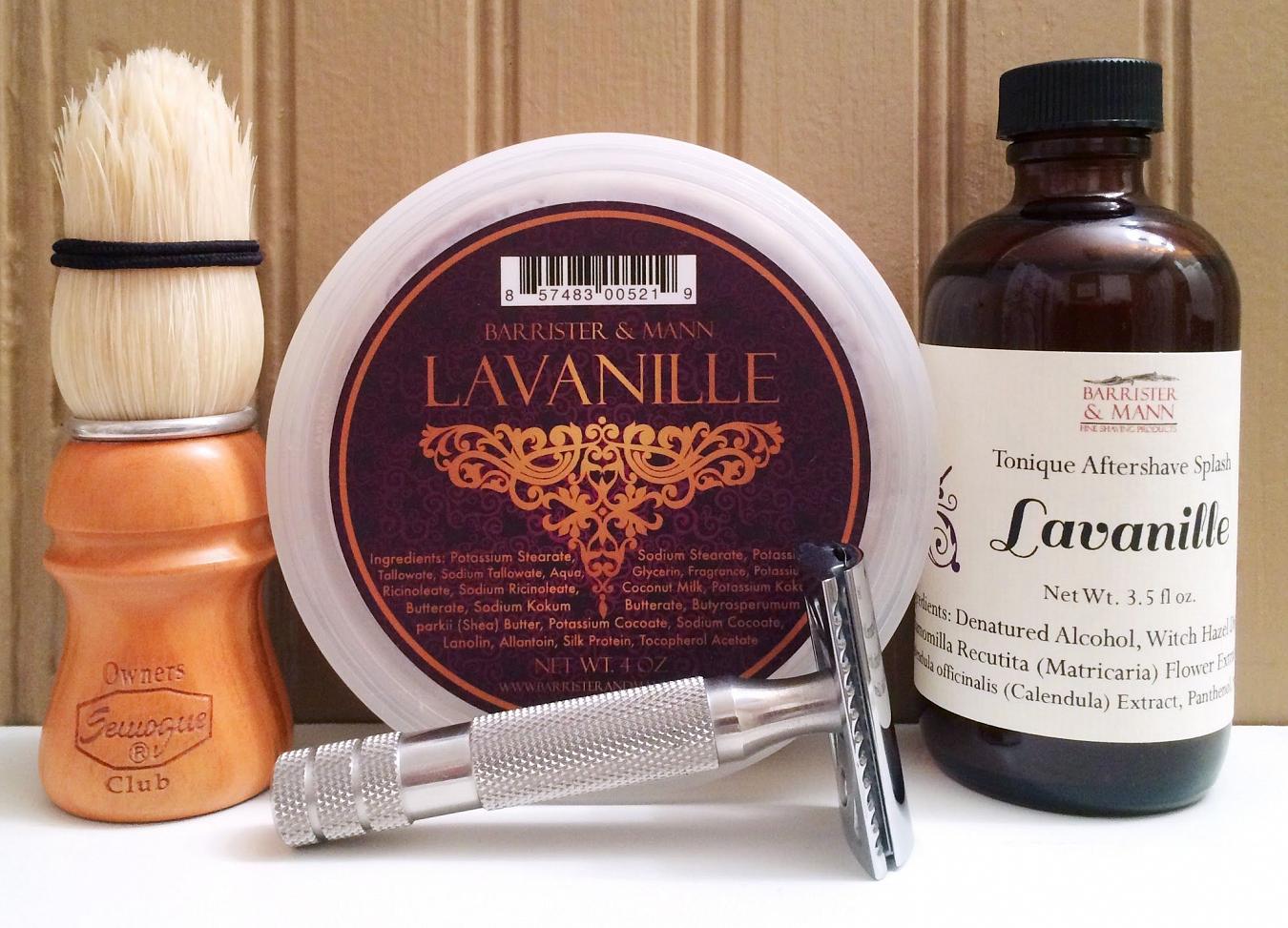 Today's SOTD and review features another fantastic set of goods... Barrister and Mann Lavanille #soap and #aftershave! Lavender and vanilla with a dark, mysterious twist.

Hot on the heels of my Leviathan SOTD and review and first impressions, a seasonal release - is this unique scent; one of the regular offerings at Barrister and Mann. As the title might suggest, Lavanille combines lavender and vanilla, but it's much more than that... More like an evil twin brother. Sweet on the surface - but below lurks a dark soul. What should be a sweet floral scent is undercut by the ballsy choice to include isobutyl quinoline, which gives this its unique character. It's a dark and bitter, earthy and leathery oil with an animalic quality of high potency. This is enhanced further by the inclusion of the equally potent Exaltolide, adding notes of musk and powder with hints of tobacco. Cedar adds some bite. It's all this darkness that you get in the mid and base notes, long after the lavender and vanilla that first hits you. It's also why this soap is brown - as is the resulting lather!

IMO, this is the most polarizing of the regular Barrister and Mann scents; it definitely won't be everyone's cup of tea. But I think it's extremely decadent, complex and intoxicating. Like smoking a cigar in an old parlor with buttoned ox-blood leather seating. Some suggest Leviathan is also polarizing, and I can see why - though I think it's a little exaggerated, at least compared to this scent and especially once dry down is complete. The former takes on a more formal, cologne vibe whereas this juice stays more on the fringes. Wear it with your favorite sweater in the cooler months.

Rather than a straight recreation of the early 20th century base by the House of DeLaire for Parfums Caron, called Mousse de Saxe (Saxon Moss) - Lavanille is a fresh interpretation of this accord. It (along with a couple of other mossy accords) were used in several of the Caron fragrances. It's not a complete fragrance unto itself. It last saw the light of day in 1969 after which it disappeared... Until now.

Lather performance is well-known with #BarristerMann and this is no exception. As I've mentioned in my other reviews of their soaps, the key is to load heavier than you might be used to - in fact, I doubled my usual loading time of 15s to 30s. Add water to taste; it can be thirsty. The resulting lather is dense, creamy and divine with loads of cushion and ample slickness. As mentioned, Lavanille produces a light brown lather - and the scent strength is robust. It made for a truly excellent shave and the ingredients are among the best available. I'm a firm believer in several of them; tallow, glycerin, kokum and shea butters, lanolin and silk protein. Needless to say, the resulting post-shave face feel was outstanding - soft, moisturized.

The aftershave just adds to the experience with a healthy dose of the scent and additional face feel goodness of alcohol, witch hazel, chamomile and calendula extract and both panthenol and sodium lactate for hydrating and healing (a better option over glycerine).

Hardware today was the #SOC brush giving backbone to the loading of the soap while the suds were whipped up in the #GTP scuttle . Cleaving duties fell to the #Mühle #R89 head fitted with a #PolSilver blade on shave two.

Yup, this is an interesting scent to be sure. It won't be for everyone. But if you like scents off the beaten path, this one is complex and decadent. The performance of the soap and aftershave are without reproach.